BBC reports “how women detained in recent anti-government protests are being sexually and physically abused.” 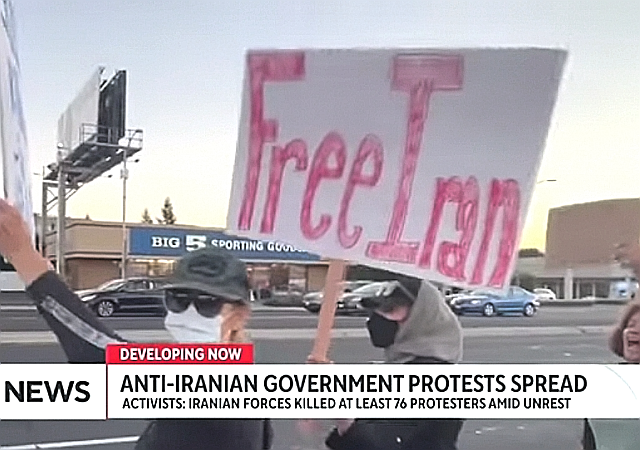 The BBC reported Saturday that female protesters arrested during the anti-regime protests in Iran are being subjected to torture and rape.

The harrowing account of women detainees being beaten and sexually abused in Iranian prisons was compiled by the country’s prominent human rights activist Narges Mohammadi, who is currently serving a lengthy prison sentence in Tehran’s high-security prison.

More than 18,000 Iranians have so far been arrested for participating in the recent wave of protests — many women. Two Iranian men, aged 23, have been publicly executed, and several others have been sentenced to death for their role in the protests.

Iranian women have played a central role in the protests that started three months ago. Nationwide demonstrations erupted in mid-September following the death of a 22-year-old Iranian woman in the custody of the regime’s morality police. The young woman, named Mahsa Amini, was detained and allegedly tortured by the regime’s Sharia enforcers for violating the Islamic dress code.

The BBC reported the mistreatment of female Iranian prisoners:

A leading human rights activist in Iran has written from prison to give the BBC details of how women detained in recent anti-government protests are being sexually and physically abused.

Narges Mohammadi said such assaults had become more common in recent protests. She is serving a lengthy sentence in Tehran’s notorious Evin prison.

More than 500 protesters, including 69 children, have been killed, while thousands of others have been arrested, human rights activists say. Dozens of Iranian security personnel are also reported to have been killed.

Many of those arrested have allegedly been subjected to torture and other ill-treatment in custody. (…)

[Mohammadi] says that one well-known activist had her hands and legs tied to a hook above her head in the vehicle taking her to prison – and was then sexually assaulted by security officers.

With women at the forefront of the uprising, security forces loyal to the Islamic regime used rape and sexual abuse to intimidate them from showing up at demonstrations.

Gunning down protesters and abusing or hanging them in public squares have failed to intimidate Iranian people, who continue to demonstrate against the regime.

Anti-regime protesters came out tonight as well on the 100th day of #IranRevolution in Esfahan.

This child-murdering regime won’t be able to deter Iranians from protesting. Iranians will protest until this regime is gone.

Amid a deadly crackdown against anti-regime protesters, Germany, one of Iran’s leading backers in the wake of 2015 nuclear, has halted export and investment guarantees for companies doing business with Iran. The measure, announced on Saturday, will make it difficult for German companies to do business in Iran.

The sanctions slapped by Germany “in light of the harsh crackdown on protests” will come into effect “with immediate effect, while export credit guarantees will be placed on hold from January,” the business magazine Forbes reported.

The Associated Press reported the details:

The German government said Friday it is formally suspending export credit and investment guarantees for business in Iran in the wake of authorities’ crackdown on protests.

The Economy Ministry said it also has suspended other “economic formats,” including a dialogue on energy issues, in view of “the very serious situation in Iran.”

The ministry said that use of those instruments for projects in Iran was suspended for decades until there was a “short phase of opening” from 2016 as a result of Iran’s agreement with world powers, including Germany, on its nuclear program.

After President Donald Trump withdrew from the nuclear deal in 2018, Germany advocated creating an independent payment system for trading with Iran, thus bypassing the U.S. banking institutions. With Germany now cutting down on trade ties with Iran, the regime is running out of friends in the West.

I small a “czar” position opening soon for Rashida.

The Iranian penal system seems to be modeled on the Swedish one, where there is very little difference between how one is treated in prison vs at home.

Technologically advanced savages are still savages. The date on the calendar is irrelevant. Savages are gonna act like savages.
.

Amd American Feminist are truly pathetic they have given womanhood to trans destroyed so many opportunities for young girls, and ignore the savages of real
Women

This is my shocked face; which won’t (yet) get me beaten raped n beaten to death where I live. Tho they’re looking at Iran as a model where CCP China doesn’t yet have an answer.

Waiting for the vile Dhimmi-crats to issue even a scintilla of criticism of Islamic supremacism, totalitarianism, misogyny and oppression, as practiced by despotic Islamic regimes, and, hearing… crickets.

This is exactly what should have been expected, rape of female prisoners by guards is SOP in Islamic prisons, though there’s probably explicit direction to do it in this case. It isn’t even rape under Sharia law.