Will Buttigieg resign? A former Trump official resigned over the exact same practice. 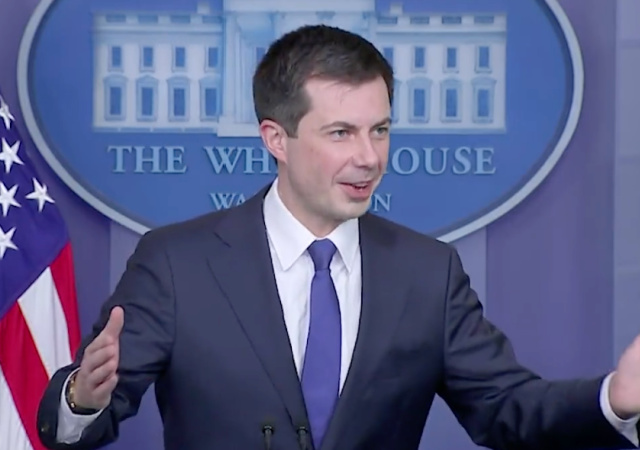 Secretary of Transportation Pete Buttigieg has flown on taxpayer-funded private jets at least 18 times since 2021, according to documents obtained by Fox News Digital.

Buttigieg is the guy who wants everyone to drive electric vehicles and be more environmentally friendly.

Will Buttigieg resign? A former Trump official resigned over the exact same practice:

Buttigieg has traveled across the country — visiting Florida, Ohio and New Hampshire, among other states — and out of the country using a private jet fleet managed by the Federal Aviation Administration (FAA), according to flight tracking data reviewed by Fox News Digital. The flight records align with Buttigieg’s schedule of external and public engagements obtained by government watchdog group Americans for Public Trust (APT).

Both parties in the House Oversight and Reform Committee started investigating Trump officials over their “use of government-owned and private aircraft for travel days before Price submitted his letter of resignation.”

The Republicans take over the House in January.

In April 2021, a camera caught Buttigieg unloading his bike from a huge SUV only a short distance from his destination.

Buttigieg obviously wanted to show off that he wanted to save energy.

The Department of Transportation has a way to justify Buttigieg’s use of private jets:

“Secretary Buttigieg mostly travels by commercial airline, and has directed that travel and logistical decisions be grounded in efficient and responsible use of taxpayer dollars,” a DOT spokesperson told Fox News Digital. “Given that commercial air travel is usually the cheapest way for the Secretary and his staff to travel, 108 of the 126 flights for DOT trips he has taken have been on commercial airlines.”

“However, there are some cases where it is more efficient and/or less expensive for the Secretary and accompanying personnel to fly on a 9-seater FAA plane rather than commercial flights,” the spokesperson continued. “Use of the FAA plane in limited, specific cases has helped to maximize efficiency and save thousands of taxpayer dollars.”

The spokesperson did not say how much us taxpayers saved by Buttigieg using the private jets.

Why doesn’t the dude use his precious electric vehicles to travel across the country?

Little Pete, America’s sissy boy is saving the world. Besides, it’s not his money.

It’s not his fault he had to fly private. He said if he flew on a public airline Sam Brinton might steal his luggage.

How fast the talentless get corrupted, isn’t it

He is one close shave and some bright red lipstick away from stealing luggage in the airport.

We care, but our congressional representatives don’t. They have their political off-season junkets to attend to. August and January. Fact finding missions to Milan and Venice or the Swiss Alps. It’s hard work, no matter what the peasants say.

Remember when Trump disallowed Pelosi from using airforce assets to shuttle her fifty-plus entourage to Italy. That incident provoked her into an enduring, simian rage. I’m quite sure this was a major component in her quest to destroy Trump by any means necessary.

An easy way to fix it is to authorize and require use of:
1. Space available seats on existing US Military flights
2. Commercial air service

When no flights in those categories existed in the 48 hour period prior to the time of the event at the destination then Cabinet level Officers could book a commercial flight on chartered private aircraft. The travel costs should come out of the normal appropriated Agency Budget. The invoices to be provided to the committee of jurisdiction in How and Senate. A spreadsheet identifying the traveler and costs of travel to be released to the public quarterly. Sell the govt jets.

Here I fixed it for you:

At $7000 to $8500 an hour operational cost of a Cessna 560XL there are zero cases where it is more efficient and/or less expensive for the Secretary to fly on a 9-seater FAA plane rather than a commercial flight, BTW: That does not include the cost of two pilots.

My bad! Those operational cost were when jet fuel was $2.10 a gallon. It has been in the mid $3 range most of the past year. That pumps the cost to operate closer to $10k per hour before you pay your pilots.

There is not a chance in hades that ANY congressperson, of whichever party, wants to be seen as inhibiting politicians’ use of private jets.
They might raise a stink about it for an hour, but it’ll not be an issue the next day.

Show me a Dumb-o-crat apparatchik and I’ll show you a transparently posturing, phony, play-acting hustler. These vile snakes are all the same, fake hypocrites to the core. Buttigieg and his husband are especially galling, with their insufferable preening and narcissistic sanctimony.

And here I thought he was riding his bike everywhere /s

Riding a five block distance, after Buttigieg’s security detail removes his bike from the trunk of his SUV. Must keep up virtuous appearances and associated theatrics, after all!

The epitome of the pretend brainiac. The guy could not change a light bulb.

Interesting that he and his hubby were tight with the bald luggage thief.

Gotta stay connected to the little ones. That chest milk of him only has a 14 day shelf life.

Even lied to the Senate about this, in sworn testimony.

This seems like our version of “Two scoops of ICE CREAM!!!!”

What I care about is what our Secretary of Transportation has done to help with the massive supply chain disruptions — at the ports, with the trains, with trucking.

I wouldn’t give a rat’s ass that he’s a corrupt hypocrite (like most of our “elite”), if he could manage to do the important parts of his job.

Pete is very selective about where he parks his bum- only private planes and public restrooms.

This fool is a worthless POS, arrogant and completely detached from reality.

Let’s not forget him being transported via Big Black Gas Guzzling SUV closer to his destination so he could pull out his electric bike and ride the rest of the way! Photo Op was Photo bombed and the episode was strangely forgotten:
https://www.youtube.com/watch?v=T3dJt9B23fk

It’s not just the cost. If these silly bastards have so much free time that they can jet around the world for fun, we should re-evaluate whether we really need them or not. It seems the “Secretary of Transportation”–whoever occupies the post–doesn’t have any worthwhile work to do.

Oh no, woe is me and alas for humanity, a politician is being a hypocrite. Say it ain’t so!!!