Now we wait for the annual Kabuki theater of congressional budget drama, for quick Christmas-season passage of a truly monstrous budget that people are too busy and distracted to notice. 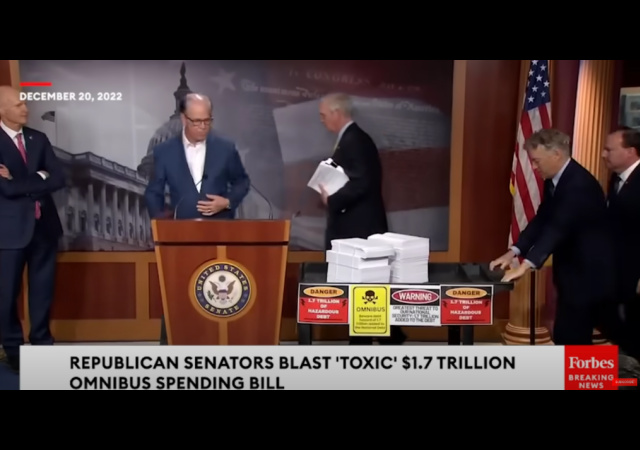 Fox Business pundit Larry Kudlow used the term “monstrosity” to describe the Omnibus bill that is being considered by the US Congress.

…Republicans, or at least the Senate version, pretend to be opposed to tax hikes, but in this monstrosity omnibus, they didn’t lift one pinky ring finger to prevent tax hikes, which, by the way, will retard investment, productivity, jobs, real wages and blue-collar family incomes.

So, this is not just a monster spending hike bill, this is also a tax hike bill, which Mr. McConnell is apparently so proud of. Other Republicans are trying to sell this loser on the basis of a 2% reduction to the $12.6 billion annual IRS budget, but this does nothing about the $80 billion increase already legislated in the fraudulently named “Inflation Reduction Act” for 87,000 new IRS agents. In other words, nothing happened.

There are so many crazy things in this bill, we don’t really have the time to go through all of them. On just a couple of ironic things: The FBI gets a near $600 million increase for all the good work they’ve done in the “Twitter Files” and Lord knows where else.

Concerns are now being raised by a particularly monstrous linkage between “family planning” and “biodiversity.”

…Bishop documented many of the examples from his Twitter account, including over half a billion dollars into “reproductive health” in places that could threaten endangered species.

“On a more sinister note, here’s at least $575 million for ‘family planning’ in areas where population growth ‘threatens biodiversity.’ Malthusianism is a disturbing, anti-human ideology that should have ZERO place in any federal program,” Bishop tweeted.

Malthusianism refers to a doomsday projection that has been a touchstone of anti-humanity theories from “experts” ranging from economists to environmental activists.

Merriam-Webster defines Malthusianism as a theory by which the “population tends to increase at a faster rate than its means of subsistence and that unless it is checked by moral restraint or disaster (such as disease, famine, or war) widespread poverty and degradation inevitably result.”

On a more sinister note, here's at least $575 million for "family planning" in areas where population growth "threatens biodiversity."

Malthusianism is a disturbing, anti-human ideology that should have ZERO place in any federal program. pic.twitter.com/7EfFx2pq0M

The amount allocated for family planning is consistent with the amounts for previous years. It is the linkage to “biodiversity” that is troubling.

“Not less than $575,000,000 should be made available for family planning/reproductive health, including in areas where population growth threatens biodiversity or endangered species,” a draft of the omnibus reads .

It’s unclear why the provision expressly notes it should go toward areas where population growth threatens biodiversity or what type of family planning services would be provided with the funding.

The omnibus spending bill includes $575,000 “for family planning/reproductive health, including in areas where population growth threatens biodiversity or endangered species.”

In other words, in the interest of preserving bald eagles and rainforests, stop having kids.

In bureaucratic speak, “family planning” means abortion. Likewise, “biodiversity” will mean anything the eco-activists and social justice warriors will want it to mean…and it will not be beneficial to either Americans or the rest of humanity.

Now we wait for the annual Kabuki theater of congressional budget drama for quick Christmas-season passage of a truly monstrous budget that people are too busy and distracted to notice.

I’m in favor of a small spending bill to keep things running, but common sense suggests that it be the least amount required through the holidays.

Railroading through a giant spending bill that almost no one has read is unlikely to be in the best interests of the people.

It was a free for all vote buying bill.

I hate to reference an outside news agency’s article. If I break the rules forgive me, but I have a legal question that you guys might have an answer. In this article, it mentions

“Schumer has come up with a procedural tactic to circumvent Lee’s amendment and avoid failing to pass the massive bill before Christmas. According to Punchbowl News, Schumer has drafted a side-by-side amendment on Title 42, which is crafted to cancel Lee’s amendment by giving Democrats and Republicans each a vote.”

Does anyone know what a side by side amendment is?

It began as a bipartisan give and take, and devolved into a dirty trick to “fill the amendment tree” and deny the minority any say whatsoever.

Wow, they sure like to complicate issues. When can we call it dead?

An out of touch budget with linkage of family planning to biodiversity, but no linkage to reality.

In the name of biodiversity, I propose returning Washington DC to a state of nature.
From orbit.

Now that the left has perfected purchasing votes by being willing to increase the military budget while being willing to give the second bribe of giving a blank check to Republican senators for pet projects at home….could we end our policy of unilateral disarmament on using earmarks ourselves to get our priorities through congress and remove the even more atrocious principle of “if day ends in Y expand military budget; it’s urgent we always need more money for arms rebuild muh military (which BEFORE this bill had a budget consisting of all other military spending on planet Earth) and “?

We need to be able to buy votes; it is effective and we don’t have any other leverage when we have congress. We also need to stop increasing the military budget. For what we had in spending BEFORE this round of military budget increases it is similar to what axis nations spent before they started the second world war. Why do we need more armaments than the rest of planet Earth combined?

We really need to stop this imperial military focus. In addition to everything else it costs us Democrats getting their concessions to.

Imagine being this brazen. Danny talking tough while simping for Mitch fucking McConnell.

I called everyone of those traitors

We really need a 3 rd party, only Trump can do it

Half of those so called republicans ran as conservative MAGA types

Jesus they need a comeuppance

A real 3rd party, like we almost had with ARod Perot

He opened my eyes , especially with his whiteboard educational adds

God I hate these politicians

The “Stupid Party” strikes again. We can always rely on GOP in Congress to roll over for the Dumb-o-crats and give them everything they want, every single time. Not even a scintilla of opposition to the Dumbs’ wicked and corrosive conceits is ever proffered.

The voters are the dumb ones.

A quadrillion here… a quadrillion there… pretty soon you are talking about real money. It’s just play money now… living the good life until the collateral is gone.

Why do you think the treasury and the Fed want to get into Crypto? They’ll be able to create money without wasting paper and ink.

18 Republicans joined all the Democrats to pass it. What is the point of voting for Republicans. when they turn around and vote with the Democrats for whatever insanity they want. We were screwed.

As usual, Congress votes in opposition to the American people they’ve sworn to represent.
And they still can’t figure out why January 6 happened.