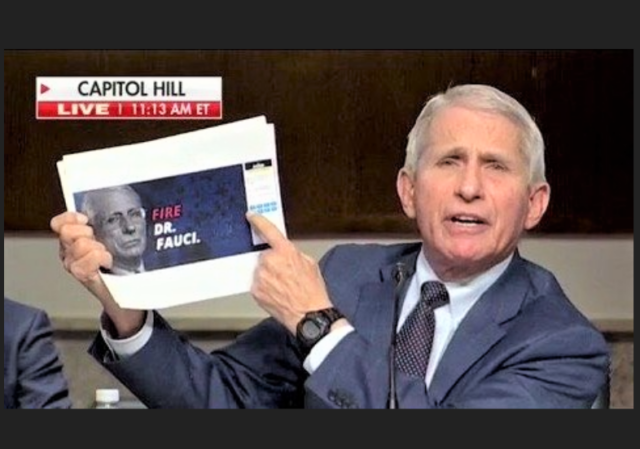 Last week, Professor Jacobson reported on the deposition of White House coronavirus advisor Dr. Anthony Fauci, which took place as a result of a lawsuit commenced by Louisiana and Missouri. The suit alleges that numerous Biden administration officials colluded with and directed big tech and social media giants to censor dissenting scientific and medical voices about covid.

Professor Jacobson noted that Fauci couldn’t seem to recall anything related to records associated with calls and emails he made. According to Missouri Attorney General Eric Schmitt, the deposition records show that Fauci couldn’t “couldn’t recall” over 170 times.

According to the transcript, Dr. Fauci said “I don’t recall” 174 times, including when asked about emails that he sent, interviews that he gave, and other important information.

One of the most disturbing elements of the testimony, especially given the current unrest in China, was correspondence with the National Institutes of Health Dr. Clifford Lane. Lane was “very impressed” with how China was managing the COVID-19 pandemic in 2020.

Eventually, Fauci and Lane created policies that led to economy-crushing and liberty-destroying policies such as social distancing.

…Missouri Solicitor General John Sauer conducted the deposition with Fauci. According to the transcript, Sauer pressed Facui on a quote from an email from Dr. Lane.

“And he goes on in that last sentence on that page to say, ‘From what I saw in China, we may have to go to as extreme a degree of social distancing to help bring our outbreak under control,’ correct?”

“So he drew the conclusion that there might have to be extreme, in his word, measures to mandate social distancing to bring the outbreak under control, correct?” Sauer asked.

“That’s what this is implying, yes,” Fauci said.

Sauer went on to reference an email from Dr. Lane dated Feb. 23, 2020 which, according to the transcript, read, “China has demonstrated this infection can be controlled, albeit at great cost.”

“Did you think that social distancing – I’m talking about this time frame of around February 20 of 2020 – did you think that social distancing would have to include only high-risk individuals or would it apply to society as a whole?” Sauer asked.
“When you’re dealing with a respiratory illness that has the potential to kill a lot of people – we’ve lost over one million people in this country – in order to have an effective interruption, which would almost certainly be on a temporary basis, but to interrupt this enormous explosion of infections that we were seeing, you would have to involve essentially the entire community,” Fauci responded.

Sadly, Lane and Fauci completely ignored Sweden’s approach, which seems to be the winner in the covid response effectiveness pageant.

Sauer also asked about Fauci’s daughter, who worked as a software engineer at Twitter.

“Well, right now, no, but when my daughter worked at Twitter, I was on a first-name basis with her,” Fauci said.

Sauer asked for Fauci’s opinion “about whether people should be allowed to post on social media opinions” that might be dangerous or lead to a loss of life.

“You know, again, you say allowed, I don’t know what the legal or other First Amendment issues are associated with that,” Fauci said. “That’s not my lane or my area of expertise. As a physician and a scientist and a public health person, I’m very sensitive to the fact that disinformation, including some of the disinformation that we discussed that, for example, has people avoid lifesaving interventions, is dangerous to health.

“… how you counter that I think is open to question. My way of countering false information, and I’ve been on the record multiple times as saying that … my approach is to try to … flood the system with the correct information as opposed to interfering with other people’s ability to say what they want to say.

And I’ve said, I think, if you, in your investigations and your discovery, you looked into how many times I’ve often said the best way to counter misinformation and disinformation is to flood the system with correct information.”

Fauci drenched social media with Noah’s-Ark-Levels of disinformation, which I and many others have spent much time refuting, countering, and challenging. Eventually, he agreed with me that we must learn to live with the virus.

However, that was only after the implementation of lockdowns, masking, and vaccine mandates, the consequences of which we will be dealing with for many years.

Likely, even more, disturbing details from the 359-page transcript will be revealed. One can only hope Missouri’s and Louisiana’s attorneys general will obtain some justice for their citizens and those in the rest of the country.

None of this, of course, had to do with Fauci’s lifetime embrace of a strong socialistic state over individual freedoms.

Tiny dictator goblins gonna dictator. I expect it. I am more upset with local officials, police, and mostly doctors who followed/supported what they knew wasn’t true.

Apparently, incompetence can reach the level of dis- or misinformation.

Does he remember contributing to the Wuhan Center for Pandemic Leaks?

Depositions or congressional hearings are a pointless waste of time & money. Everything the sociopath Fauci did is a matter of public record.

In a just world, he would be rotting in prison awaiting execution for his crimes against humanity.

But this is clown world, so it’s all merely sound n furry, signifying nothing.

“Sound and furry” is an hilariously apt depiction of modern clown world.

‘Furry.’ Well, this administration is full of all kinds of sexual deviants…

“I don’t recall.” He paid careful attention to his mentor there: Hillary Clinton.

This is riveting reading . When will Collins be deposed?

“THE WITNESS: When you’re — when you’re
25 dealing with a respiratory illness that has the
DR. ANTHONY FAUCI 11/23/2022
http://www.lexitaslegal.com Phone: 1.800.280.3376 Fax: 314.644.1334
LEXITAS LEGAL
Page 170
1 potential to kill a lot of people — we’ve lost over
2 one million people in this country — in order to
3 have an effective interruption, which would almost
4 certainly be on a temporary basis, but to interrupt
5 this enormous explosion of infections that we were
6 seeing, you would have to involve essentially the
7 entire community.

This testimony confirms in black and white that Fauci supported the idea that a lockdown of American business ,, society and personal liberties without regard to mental health or any other concerns was the only solution that Fauci ever considered .

The easiest way to prove Fauchi and the public health community are liars is the masks. They knew the masks weren’t effective. Every previous study demonstrated that. They proposed mask mandates anyway. Then add the six foot social distancing. They chose a number. They had no data that supports a six foot rule. It was arbitrary.

Taken together these two examples amply demonstrate that data was ignored. It shows they made it up as they went and didn’t rely upon the ‘science’. It was about social control and appeasing the hypochondriac Karens.

Everything else they did is tainted by these two decisions which clearly show they will lie. They shouldn’t get any benefit of the doubt. Not one iota of sympathy or understanding that they had limited information about a new virus because as these two examples show they were willing to ignore the data they had and make things up when they didn’t have data.

Ask Fauci if he recalls that time he claimed sharing a cereal box would spread HIV.

What a surprise … the old fascist had memory problems and the few things he did answer were lies. Build the gallows, I’ll gladly kick the chair from under him.

As I said in a paraphrase from the movie Heavy Metal that got me banned from Twitter, “the best Fauci can hope for is to be buried in an unmarked grave so his corpse doesn’t get desecrated.”

I thought The Bad Grandpa administration was reinstating amnesty by executive order.

The little creep belongs in prison.