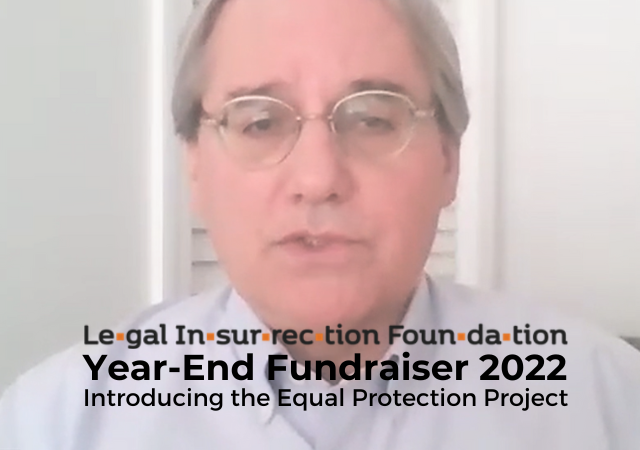 As we approach the end of 2022, I wanted to give you an update on what’s been doing at Legal Insurrection Foundation and our various websites, what we have planned for 2023, and to introduce you to our next big thing, the Equal Protection Project. You can DONATE to join us in this effort.

As we approach the end of 2022, I wanted to give you an update on what’s been doing at Legal Insurrection Foundation and our various websites, and also talk to you about where we’re going in 2023.

2022 has been a pretty eventful year for Legal Insurrection. We do so much. We probably could be better at letting people know all that we do because a lot of it takes place behind the scenes.

It’s not what I imagined we would be in 2008 when I started this as a solo blog, on Google Blogger, after a challenge by somebody I knew. I came up with the name Legal Insurrection at that time because it seemed to capture the spirit of what we did, and the spirit of what we do is ‘disruption.’ That’s how we were once described by somebody. When I was explaining what we did, she said, I know exactly what you do, ‘you are what we call disruptors,’ and that really is the spirit of Legal Insurrection. We find topics, we dig into them, we don’t let them go, and we try to make a difference that way. And this year has been a year we’ve done that as well as we’ve ever done it.

Right now, Legal Insurrection Foundation, which is a tax-exempt nonprofit, donations are tax deductible, has multiple platforms. We have the traditional Legal Insurrection website, which is really our flagship, and which is how most of you know us. We also have CriticalRace.org, which is something we rolled out in 2021 and now has become a really big part of what we do. It’s a unique platform of databases, interactive maps. It started with higher education and we’ve expanded it into private schools in the K-12 area, to military academies and also to medical schools. And those have generated over a hundred media mentions, media links.

At Legal Insurrection, the website you know, we cover the news, we dig into things. We have a great staff of writers. But there’s also behind the scenes things that you don’t necessarily see, at the Foundation. We’ve written amicus briefs, so-called friend of the Court briefs, in two cases in 2022. In the US Supreme Court case involving the Asian students challenge to affirmative action at Harvard and University of North Carolina. We also filed one in the Third Circuit Court of Appeals, challenging a Pennsylvania rule which would limit the speech of attorneys if what they said was deemed offensive to somebody out there.

We have done multiple investigations. One of those investigations I’ll talk about more in a second, involved a clearly racist hiring program in the Providence City School District. We have filed a complaint with the US Department of Education. We also have filed lawsuits against school districts that refuse to give us the documents that we requested pursuant to public records requests.

We have elevated multiple individuals to really national fame and national stardom in the parents’ rights movement. You’ve probably seen on the website Nicole Solas and Ramona Bessinger and Laurie Barrett and Ellen Schaffer. And we will be bringing out more people. And what we do, we use the ability to get attention on the website to elevate these people to national attention and help the parents’ rights movement that way.

We have written comment letters on rule proposals, for example, by the American Bar Association, challenging and objecting to their attempt to inject race into all considerations in law school, including programming and required coursework and hiring and admissions. And we will continue to do that.

We’ve written numerous op-eds at other platforms. We’ve had multiple op-eds at the New York Post, at Real Clear Politics, at Jewish News Service, on topics that are of interest to us that we could cover at the website, and we do cover, but we reach a broader audience that way. We have helped numerous community groups behind the scenes, challenging things such as flagpole policies that excluded certain ideas and required the flying of other ideas like the Black Lives Matter flag to the exclusion of veterans’ groups who wanted to fly their own flag as well.

So we’ve done all these things that don’t necessarily show up on the website, and that’s really what we do. We get in there and we help people. You’ve seen probably, in the past, and I’ll post it again, our list of testimonials from professors, from faculty members, from school teachers, whose assistance we have come to through publicity, shining a light and really exposing what’s going on, is what we do best.

And that’s why I’d like to segue to our next big project at Legal Insurrection. It really is an outgrowth of what we’ve done in Providence.

As you know, if you’ve read the website, the Providence City School District with funding from a major charity in Rhode Island, announced a hiring incentive program where student loans would be forgiven, if you’re a new teacher in the Providence School District. The catch is you can only qualify for that if you are non-white, clearly racist on its face. And we’re challenging that at the US Department of Education.

And that really has given birth to what our big project for 2023 is, to fight the current form of racism that exists in school districts, universities, corporations, and even government, which is preferring one race to another in order to advance the Diversity, Equity and Inclusion agenda. We are launching a project we call the Equal Protection Project. We have a website, it’s just a holding page right now. We will come out with a more full website called EqualProtect.org. That’s EqualProtect.org. And that is where we’re going to shift from just shining a light on things to actually bringing litigations challenging policies such as the policy we have challenged in the Providence City School District.

We’re beginning to fundraise for that. It’s very important for us. We’re going to need a lot of money to get that launched. We encourage people to contribute to our efforts more generally, but also with respect to the Equal Protection Project.

We’re very excited about where we’re going at Legal Insurrection. We’re essentially bursting at the seams.

If we had the resources, we could do even more than we do, but we’re very happy with where we are but need more resources. We ask you to join us in this effort.

Thank you so much and I look forward to meeting some of you hopefully in the coming year as we’re getting out and about around the country. 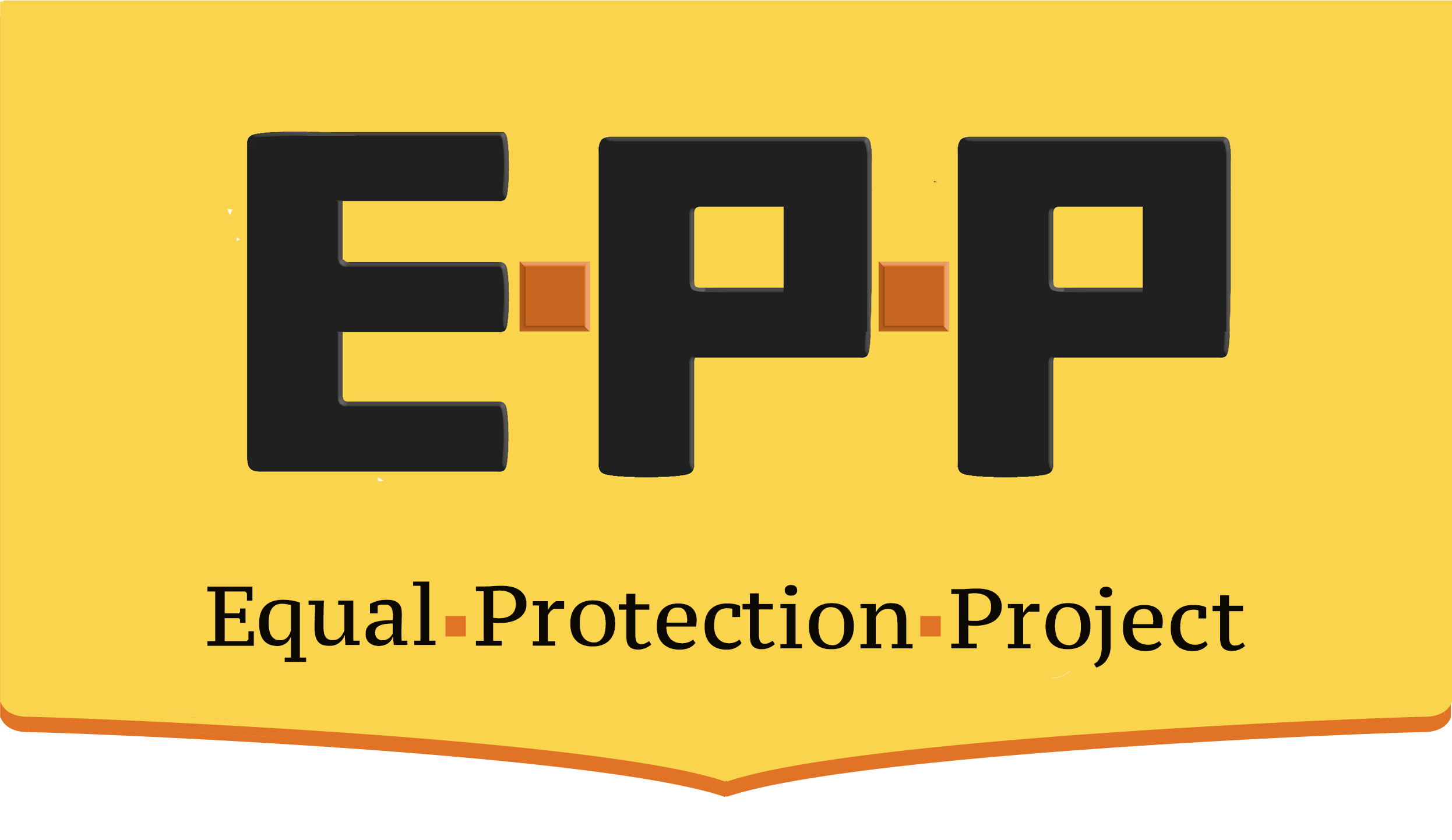 You can DONATE using a credit card, PayPal, Google Pay, or Apple Pay at our donation platform. Donations are tax deductible to the full extent allowed by law.

Checks can be mailed and payable to “Legal Insurrection Foundation”:

To donate securities, email us.

Very worthy project. Focusing a spotlight on the frankly absurd level of mental gymnastics the purveyors of these sorts of policies put themselves through to support blatant discrimination seems like a simple task. It will be incredibly frustrating as the purveyors seek to deflect blame or any accountability.

Any policy which with a simple word search and replace substituted that policies current beneficiaries for ‘white, male, cis gendered, heterosexuals’ is discriminatory. It really is that simple. Either we as a culture, society and as individuals demand we retain the achievement of the civil rights movement which delivered upon the aspirational goals of our founding documents in our institutions both public and private or we go backwards into tribalism.

Professor you and your staff are Saints, AMerica and the world owes you big time.

Hopefully you will
Come to Austin Tx again, I’ll never get over the very hungry, and very appreciative Trans that sat front and center during your talk.

And as always I have my charity set to LIF on Amazon, so a little bit of what I buy goes to LIF year round.

That’s an easy and free thing that everyone can do to donate. (TANSTAAFL, I know)

Keep up the good fight, Perfessor!

I’ll send another QCD from my IRA right after January 1st. Great way to donate!

Thank you for your valuable work. Legal institutions evolve. Originally, cases to vindicate important rights could be handled by individual lawyers or small firms on a pro-bono basis. Starting in the 1930s, large organizations like the NAACP or ACLU were needed. In recent decades, such organizations lost their original focus and became more ideological.

It is important that new organizations fill the voids. I know the LIF has great integrity, and if they fundraise to litigate equal protection claims, that is what they will do without fear or favor.