“Why did you use the reputation that America was able to give to you more information, but use it for a political purpose and lie to the American public?” 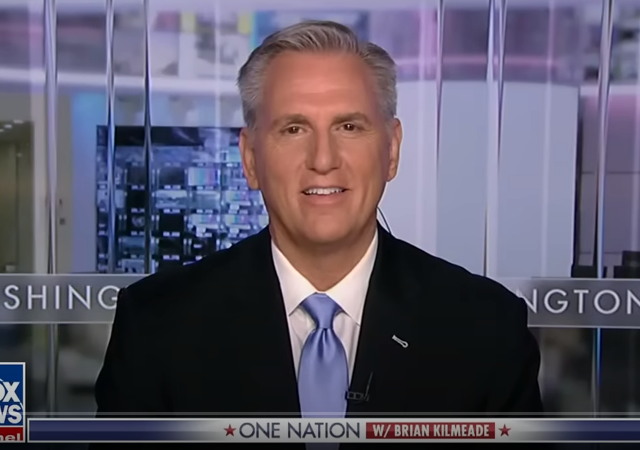 Following the revelations of the #TwitterFiles, presumptive Republican House Speaker Kevin McCarthy is now saying that the GOP controlled House will subpoena the 51 intel experts who signed a letter ahead of the 2020 election calling the Hunter Biden laptop Russian disinformation.

McCarthy made the comments Saturday night during an appearance on FOX News. He mentioned James Clapper and James Brennan by name.

House Republican Leader Kevin McCarthy reacted to the “Twitter Files,” revealing how the tech giant purportedly suppressed the Hunter Biden laptop story in the final weeks of the 2020 presidential election.

Elon Musk entrusted independent journalists Matt Taibbi and Bari Weiss to expose the behind-the-scenes efforts through the release of the “Twitter Files.”

McCarthy said it is “egregious what we’re finding” on Saturday’s “One Nation.”

“Those 51 intel agents that signed a letter that said the Hunter Biden information was all wrong — was Russia collusion — many of them have a security clearance.”

McCarthy said he’s going to bring them before a committee and have a hearing.

This video is cued to begin at the 4:19 mark, just press play:

This is something McCarthy has been talking about for almost a week now:

We're learning in real-time how Twitter colluded to silence the truth about Hunter Biden's laptop just days before the 2020 presidential election.⁰
In 32 days, the new House Republican majority will get answers for the American people and the accountability they deserve.

Mark Moore of the New York Post has more on this:

Former CIA Director John Brennan and ex-National Security Council Director James Clapper were among a group of former intelligence officials who signed a statement days after the expose, claiming it “has all the classic earmarks of a Russian information operation.”

“Why did you use the reputation that America was able to give to you … but use it for a political purpose and lie to the American public?” he said on Fox.

Republicans are preparing to launch a number of investigations into the Biden family as a result of The Post’s reporting about Hunter Biden’s overseas business relationships while his father was vice president in the Obama administration.

Some conservatives have expressed apprehension about McCarthy as Speaker, but he seems to be working hard to ease those concerns.

I could care less what McCarthy says or does.

Said it for me.

Here’s the problem with McCarthy (and McConnell as well): they’re swamp creatures, and God knows – and even most of us know – what dirt the swamp has on them. That said, McCarthy’s days as a ‘crusader’ are numbered by his swamp handlers, who will let him rant on for a short while, the pull on his leash.

Even if he wasn’t compromised, he’s just not a natural fighter, and he’ll fold under pressure.

When a Republican is president they can prosecute these criminals. Until then they can sit in the House jail.

So you are a Democrat congratulations.

Why weren’t you already planning to do that you RINO jackass.

Republicans couldn’t do anything while Democrats were in charge.

They can’t do anything when THEY are in charge. Remember “Repeal and Replace”?

“Republicans” are part of the swamp. Until the McLosers are dumped (McConnell, McCarthy, McDaniels) don’t fool yourself.

Please show me in detail where it says the house minority leader has that power.

McCarthy talks tough when he needs support but he’s lying. When the chips are down he never follows through.

He is a backstabbing RINO who will betray the MAGA movement and protect The Swamp at every opportunity.

1) What tell pray is he going to do if they ignore the subpoena? Keeping in mind being subpoenaed by Republicans is the same as a commendation for those Intel types.

2) If they just flat out lie again, what is he going to do?

3) If they tell the truth, what is he going to do?

Neither voting nor the judicial system seems to have much effect on the Left.

Yeah, a subpoena from Republicans in Congress can be ignored with impunity. The Democrat DOJ will never lift a finger to enforce a subpoena. And there is little to no chance the House GOP leadership will use the Sergeant At Arms to enforce them.

Tastes good, but has no nutrients.

Oh yeah? What about a strongly worded lawsuit, like the ones from Boehner??

Coming soon to a Congressional committee near you!

Say, howabout appointing a special investigator who never seems able to deliver a report or promises a report and never files. And what happens. Shuffling of papers. A Sternly Worded Letter – a letter never sent. Grassley wakes up and hurrumps. Sir Lindsey Graham is temporarily outraged on FOX and Friends in the morning. The usual actors play their parts and suddenly …. its election time. Again.

For six years we’ve been on the receiving side of a never ending Three Card Molly game. The Jack is the Middle Card.

Wouldn’t expect much, call them for sure but we know now it will be 5th Amendment or no recollection or will have to find in notes and get back later.
Witness is getting to be comical sadly, toss them I a jail cell until their mind clears.

Words I’d like hear spoken to the “Dirty 51” at hearings: “You see those big guys standing behind you? They’re there to make sure you can’t get out of your seat until you give us some straight g*dd*mn answers.

If you really want to hit them where it hurts just cut off their funding. The only problem is that you need a spine to do that.

Yep, another Trey Gowdy.
Get back w/me when you perp walk people that hide their face from the cameras.

OK, yeah McCarthy, always announce what your (false) intentions are well before hand. Wouldn’t want anyone caught off guard.

McCarthy is a manager with no heart in this fight. He will take inputs from all sources and then do what is best for his career. He is not a fighter or a conservative and could be just as happy as a Democrat if that had worked out. This is not the person who should be the speaker. We need someone who is furious at the way we have been treated and a real cutthroat fighter. To see what a cutthroat speaker looks like just look at Nancy!

Something I have seen more and more online. Not one person believing the Republican party when they say they will do or not do something.

This will never happen, but a vague internet persona can dream…

“The Chair recognizes non-representative Rep Clueful OnPointMan, from The Great State of Opposite.”

RCO: “Agent Smarty-pants, speaking from your experience and expertise which our colleagues have been going on about, could you clue me in here?

RCO: “How does this memo track with Soviet / Russian techniques of disinformation — dezinformatsiya as they call it; am I right about that?, and active measures — aktivnye meropriiatiia. I’m interested particularly in operations for destabilizing governments and influencing elections?”

RCO: “Well, I’m sure we know a lot about Active Measures, since your agency community and our esteemed colleagues have been going on about Russian interference for a few years, now. Does this look like that?”

RCO: “Could you speak specifically to the wording, timing, and the way this memo was positioned and promoted?”

RCO: “I have here some agency reports and analysis on Soviet, current Russian, and CIA techniques. So, let me ask about some similarities…”

RCO: “Oh, I’m not saying you were working for the Russians on this. But it sure does look like you were doing to us, what they work hard to do, and we do to other countries we don’t like much. Learn from the experts, if you can. And that’s my time. I yield back.”

The closest we have to this kind of thing is Sen Kennedy. He’ll never get a shot, given the head count changes in the Senate.

A shorter form occurred to me:

“Agent Smarty-pants, how many classic earmarks of Russian Active Measures does this letter you signed have?”