“The president has done the work to deal with what we are seeing that border since day one.” 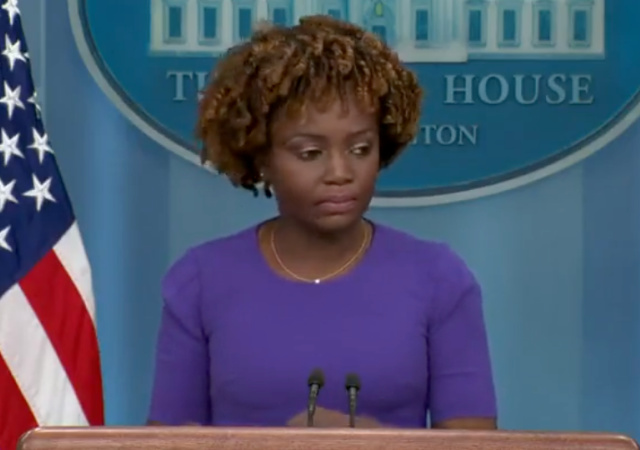 Raise your hand if you saw this coming!

The fiscal year 2023 is already on the way to breaking records regarding the border.

JEAN-PIERRE: “ — especially because of what the last administration did, and they completely gutted the system. And we know that this has been a multidecade-long problem. We need to modernize the system, and this is something that the President has put forth and we are looking for Congress to act. We are asking Congress to act.”

It’s okay! Biden’s administration has a “six-point” plan to combat the border crisis.

But should support or have concerns with Title 42 ending?

Jean-Pierre said, “What Americans should know is that the President has done — has done the work to deal with what we’re seeing at the border since day one.”

Biden went to Arizona a few weeks ago.

Biden said he had more important things to do than go to the border and see the mess caused by his empty promises during the presidential campaign.

Karine Jean-Pierre assures us the Biden administration has "a six-point plan" to deal with the expected flood of illegal immigrants when Title 42 ends. pic.twitter.com/8owB45v3jF

Karine Jean-Pierre: "[Republicans] want to secure the border. We've been doing that work on our own." pic.twitter.com/aVbz3gLuis

Reporter: “Does the president support this effort?”

Karine Jean-Pierre: “Yes we do support um uh, we do support that effort, um, can you say the question one more time?” pic.twitter.com/S5J3qsSm0V

KARINE JEAN-PIERRE: "The president has done the work to deal with what we are seeing that border since day one." pic.twitter.com/fVheDGMhTc

Why do you bother covering this moronic individual? You could ask a houseplant the same question and the answer would be more meaningful and thought provoking!! FJB

This houseplant or more correctly , potted plant, is the crowning achievement of the AI movement to continuously spew New Think and New Speak to the potted masses who believe that that they/ them can birth babies from their penises, abort babies at will , that carbon will kill the planet in ten years and so on .
Ignore it at our peril, defeat and destroy it or we are done.

Hey, Karine Jean-Pierre is entitled to her own “truth”, and only racists think otherwise.

Truthists are bad people. She is battling them, every time she steps up to that podium.
or something.

The insufferable bint hasn’t got two brain cells to rub together. So, perfect for the junta.

She’s there to lie. Period. Half the nation takes her seriously.

But she looks competent standing next to Biden…

It seems the “competent” box is either low priority or remains unchecked in this regime.

How is Biden is protecting the border?

He is placing heavy duty rubber mats all along the border to protect it from heavy foot traffic.

Man, the lies come fast and furious with this regime.

Kate Smith knew her back in the day.

“The president has done the work to deal with what we are seeing that border since day one.”

This is true. He’s been building this disaster since day one.

The vile Jean-Pierre is the perfect trained seal to parrot her dotard-marionette boss’s stupidity and mendacity.

Pissing on your head and tell you it’s raining

What if she gave a presser and nobody showed up. Just left a card saying that there is no point to it? Or just sat in the chair and held up a sign that said liar?

KJP has a unique gift, the embodiment of stupidity and dishonestly as a combined innate personality trait.

Doing the job of Spokesperson for a WH with multiple ongoing problems of their own creation isn’t easy. Going out week after week and trying to use slight of hand and rhetorical devices to disguise and deflect reality must be frustrating. There’s only so many times even the willingly gullible will allow themselves to be fooled.

That said she is really not good at her job. Psaki was bad she is worse.

Under Trump we had a border. Now we don’t and that means we don’t need a regime.

Open borders is not “securing the border” by any definition

I know liberals have a problem with pronouns, but I didn’t realize that they are now cancelling prepositions.

Baghdad Bob did a better job than this twit. She should learn how to dress and loose the eye makeup, I think she’s sending Morse Code when she blinks. Perfect embodiment of the Biden administration. Freaks and fools.

The beyond belief starts with 81 million votes that Slow Joe received. Him hiring a spokeswoman with the IQ of a cactus is no surprise.

That’s the problem with commie talking points, you don’t have to stop and think before opening your mouth and spewing foolishness. This is the same excuse Biden and alcoholics give for their addictions. It’s all Trumps fault.

Biden and the rest are just reading their instructions like good little apparatchiks.

We need to know who is really writing this BS and running the regime.

KJP: Living proof that verifiable incompetence and mendaciousness are no barriers to lucrative and high-visibility positions in Democrat administrations.

This “mop head” needs to realize that President Trump’s border policies were great and accomplishing their intended purpose including a great wall. We were NOT experiencing the invasion of illegals, criminals, drugs, spies, or infectious people. They also were required to remain in Mexico pending their status and background history. Every time this unqualified idiot opens her mouth, we get verification of continued lies of this illegitimate administration. Biden spends more time hiding in his oceanfront basement than his does in the White House. He is not serving the best interests of this Country. He has never been to the southern border to witness the “cluster f___, he has caused nor the cost to eventually round them up and send them back to Mexico!