“No, in reality, everything is political. And politics doesn’t solve anything. Everything is a smoke bomb. It’s a lie. It’s an illusion.” 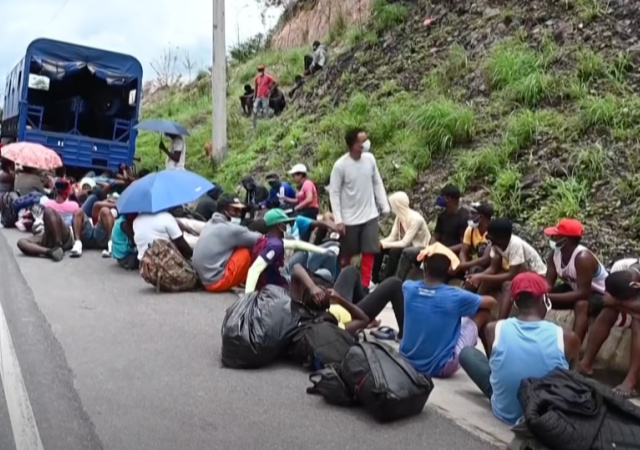 The Daily Caller asked migrants apprehended at the Guatemalan-Honduran border their thoughts on the Biden administration’s efforts on immigration and fixing the “root causes” of people leaving their countries.

The migrants see right through Biden and Kamala Harris:

“No, in reality, everything is political. And politics doesn’t solve anything. Everything is a smoke bomb. It’s a lie. It’s an illusion. In Venezuela, right now what we need is help, help that we don’t get. And so what we’re doing right now, we’re not doing it because we want to, we’re not doing it out for fun, it’s because we need it,” one migrant from Venezuela told the DCNF when speaking about the U.S. efforts to solve issues in their home countries.

“To be honest, no,” a migrant from Colombia, Andre, told the DCNF.

Biden put Harris in charge of the border crisis in March 2021, two months after his inauguration.

In July 2021, the White Praise praised Harris in a fact sheet about how America will help Central America tackle the root causes of migration.

Yeah, nothing has happened. The border is still a mess, and Harris is nowhere to be seen.

Andre, the Colombian migrant, fled because the left is making Colombia worse, and his former membership in M-19.

Most of the migrants want to come to America and contribute. They want to work and make money:

“In reality, if we had the resources, and we could live freely in our countries … we wouldn’t be migrating because there’s professional people here,” the migrant from Venezuela added, saying that he’s an engineer and that their group includes a mechanic, another engineer and a police officer. “We’re all professionals. And we’re going through a hard time. We only need resources for our families because we want to give them a better life.”

Thing is, the Biden administration and the left make them think they can just walk across the border and get to gettin’:

“Our message is that he should have communicated in a better way the date in which we couldn’t continue those routes,” he said. “If they would’ve given us an early warning, and not all of a sudden, there’s already people that were here on their way and the only option that we have is to go back to our country, so through the jungle.”

Doing nothing was their promise

Why Venezuela, Biden? Hmmm…probably has something to do with the FL conservative faction…just like the Cuban refugees.

This has never been about humanitarian support. It has always been about getting people in then trying to ram through some kind of poor auto-registering citizenship scam for illegals to be able to vote D for them. The auto-registered don’t even have to show up to vote. The D have the ballots pre-filled for them!

Really!! Why only Venezuelans? As a token action, it is pitiful and transparent, but that describes the Democrats to a “T” for everything.

hold them there, give them a lesson on American revolution,make them turn around and walk the other way.

They’d rather have the issue than a solution, which is why they won’t take “yes” for an answer.

Once you know this, figure out what they really want, and whether you want to give that to them at any price.

Illegal migrants complain that Biden and Harris broke their promise to fix the “root causes” in their country.

Well, hey, migrant people, if Biden and Harris cannot fix the root causes in the United States how can they fix anything in your country?

Why don’t you have your president promise to fix the root causes in our country. Or, maybe we should just trade presidents. If you wanna trade, we would be happy to throw in Nancy Pelosi to sweeten the deal.

Migrant…Latin for “Can’t fix their own shithole”.

Perhaps they should make a stand….but that is impossible when you have nothing.

“Most of the migrants want to come to America and contribute. They want to work and make money:”

Stop calling them migrants…they are immigrants, legal or illegal. There is absolutely nothing wrong about calling them immigrants, stop using the AP style book…there is no style, only obfuscation.

They are not immigrants. They are invaders. In historical times, we used to shoot invaders. I guess we were a lot smarter in those olden days.