How does he have any tears left? 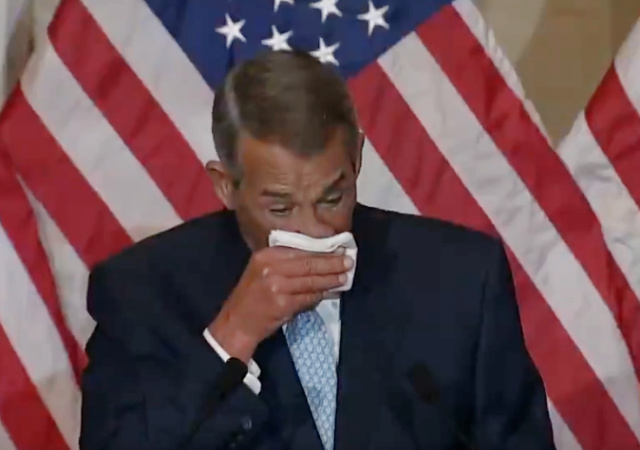 Former Speaker of the House John Boehner cried during a speech at the unveiling of soon-to-be-former Speaker Nancy Pelosi’s portrait.

Man, did Boehner lay it on thick for Pelosi:

BOEHNER: “You’ve been incredibly effective as the leader of your caucus. You know, the younger generation today has a saying, ‘Game recognizes game.’ And the fact of the matter is no other Speaker of the House in a modern era, Republican or Democrat, has wielded the gavel with such authority or with such consistent results. Let me just say, you’re one tough cookie.

You know, I can tell — I could tell a few stories here. My old friend, the late great John Dingell certainly could, and if you read my book, you know the rest of that story. But there’s another side of you, Madam Speaker, as well. As leader of the other party opposite you during many of your years in leadership, I occasionally got to see and experience something few others get to see, and that was your grace when the cameras were off and when the moment called for us to rise above politics and stand together as colleagues to do what was it the interest of the House and, frankly, what was in the interest of the country.”

“You’ve been unfailingly gracious to me, to my family and, frankly, my team here in Washington,” he said. “And Madam Speaker, I have to say, my girls told me, ‘Tell the Speaker how much we admire her.’”

“If you couldn’t tell, my girls are Democrats,” he joked.

Boehner later added, “No other speaker of the House in the modern era, Republican or Democrat, has wielded the gavel with such authority or with such consistent results. Let me just say: you are one tough cookie.”

He continued, “You and I have disagreed politically on many things over the years, but we were never disagreeable to each other. As you might have heard me say before, you can disagree without being disagreeable.”

Thank you, Laura Ingraham, for reminding us that Boehner crying is a DC tradition. I also included a few other times he cried.

There’s nothing more annoying that a crying drunk.

How about a cowardly, utterly corrupt crying drunk?

There was a British MP during the 19th Century who cried during a speech to parliament. He was forever after referred to a “The Blubberer.”

Blubberer: applies to whaling and wailing?

Yes, that is the UK application. However in the US, Blubberer Boehner phraseology applies to ass kissers who belong to the Pelosi Secret Admirers Club.

First, of 3 RINOs we didn’t need to lead the House.

And people wonder why conservatives hate them and call them RINOs.

I present you exhibit A. He didn’t cry for any number of conservatives that have retired but this backstabbing RINO GOPe jackass cries for freaking PELOSI.

Boehner the drunk runs to the path of least resistance. If he was a soldier in battle, he’d be shot for desertion.

Putin… Pelosi’s puppet? In America, they elect to abort unarmed women, and incarcerate citizens indefinitely for assembly and speech protesting the democratic/dictatorial regime. Now, you may cry, lament your Choice… uh, choice. #HateLovesAbortion

“If you couldn’t tell, my girls are Democrats,” he joked.
Unlike you, they don’t have to hide it.

“My Girls” being his pet name for his testicles.

Boehner is showing his true colors. He didn’t just suddenly have a change of heart, he has been a closet Democrat the whole time and obviously has a great, deep and abiding love for Nancy Pelosi.

Six of one, half a dozen of the other.

My eyes rolled so far back in my head I believe I just saw my brain.

Mine rolled completely out of my head and went to Circle K for a Polar Pop.

Just keep ’em out of Subway. This here is MAGA Country.

Funny thing, I don’t think Nancy P even remembers him

She uses him. I think she knows she has info on Boehner that would send him to jail. While Boehner might have the same against her, he’s too much of a corrupt coward to use her likewise.

I occasionally got to see and experience something few others get to see, and that was your grace when the cameras were off and when the moment called for us to rise above politics and stand together as colleagues to do what was it the interest of the House and, frankly, what was in the interest of the country.”

As opposed to the stuff she did on camera, like ripping up SOTU messages.

And that says everything you need to know about Boehner.

Regardless of his views or past, his behavior is disgusting.

Couple that with his views and past, and his behavior is disgusting on steriods.

Makes one wonder what sort of dirt is being held over him.

You have to wonder? —

Not the first drunk to cry while in his cups. Saying anything nice about that witch Speaker just shows how deep the swamp is. He is trash.

Brings to mind a few stories in the gospels of professional criers hired for the wake of a deceased loved one – and how they carried with them little bottles to catch their tears as proof of crying well – for a wage – of course.

Boehner was a pathetic excuse for a leader. He never failed to let conservatives down and his ineptitude allowed for the return of the tyrannical Pelosi. As he and Hastert and Ryan and others like him fail to realize, they are the reason for the rise of Trump. Had he done is job and not allowed Pelosi to legislatively castrate him, there would have been no reason for the rise of Donald Trump as our institutions would not have needed the political cleansing Trump attempted.
That he heaped praise on Pelosi is even more repulsive and is proof of his lack of fitness to claim to be a Republican or a conservative.
In previous times he would have been shunned by the tribe and banished from our sight…

The time of Trump may be over but the reverberations of what his election signaled still being felt in the DC/Dem/Media world.

Seeing Boehner with his unhealthy look that he has had for years and then the crying jag on top of that is like taking your shoes off only to realize that your dog has left a surprise for you in the front yard.

Hopefully, Danny was there to dry Boehner’s tears.

The former Speaker identifies as a sniveling RINO fool. Film at 11.

He’s been a closet-comrade this whole time!! Darn it … there is never a baseball bat around when you really need it!