I guess those ads didn’t work out so well, Newsom. LOL. 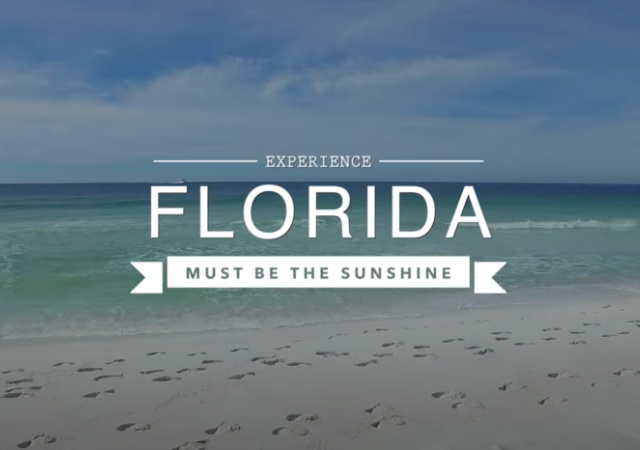 The U.S. population grew by 0.4% in 2022 thanks to migration and “the largest year-over-year increase in total births since 2007.

Florida is the fastest-growing state, taking the top spot for the first time since 1957.

Florida has gained population yearly since 1946, but nothing tops the 8% in 1956 and 1957. That’s when air conditioning became regular, allowing people to move to hotter climates.

But the south overall received a huge population boost in the last year. The West also gained more people, but mostly in the red states. Except Washington. Washington state is on the list, which surprised me:

The South, the most populous region with a resident population of 128,716,192, was the fastest-growing and the largest-gaining region last year, increasing by 1.1%, or 1,370,163. Positive net domestic migration (867,935) and net international migration (414,740) were the components with the largest contributions to this growth, adding a combined 1,282,675 residents.

The West was the only other region to experience growth in 2022, having gained 153,601 residents — an annual increase of 0.2% for a total resident population of 78,743,364 — despite losing 233,150 residents via net domestic migration (the difference between residents moving in and out of an area). Natural increase (154,405) largely accounted for the growth in the West. 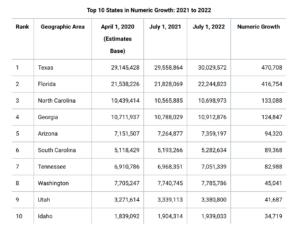 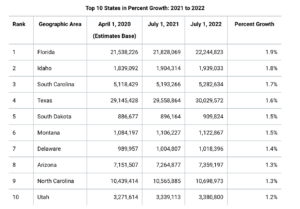 Eighteen states lost population. Is anyone shocked the top three states are New York, California, and Illinois? Yeah, me either: 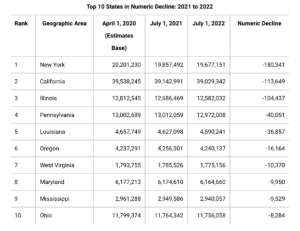 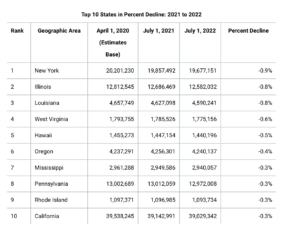 Remember when California Gov. Gavin Newsom released an ad in Florida, claiming Gov. Ron DeSantis is attacking their freedom and basically going all 1984 on them? He actually claimed that California is the beacon of freedom.

The lack of self-awareness is mind-blowing from this…dude. I’m biting my tongue.

Priceless. People in California and Florida did not approve. Even lawmakers in Newsom’s party were like, “Yeah, man, let’s not go after other states. Not cool.”

DeSantis responded, mixing in the population growth with the many other reasons why Florida is better than California:

In his speech, DeSantis noted recent population shifts favoring Florida while many Californians left the state, went after Newsom on his COVID-19 policies and not following the same guidelines as other Californians during the pandemic, criticized high-crime rates in many parts of the state, and reversed what Newsom said in his ad and called Florida a ‘citadel of freedom’ compared to the Golden State.

“Everyone wants to talk about me in Florida,” said Governor DeSantis on Friday. “I mean, like I’m just sitting here like little old me doing my job. I can just tell you this. I was born and raised in this state. And until the last few years, I rarely, if ever, saw a California license plate in the state of Florida. You now see a lot of them. I can tell you. If you go to California, you ain’t seeing very many Florida license plates.

“We would never allow what’s happened in places like San Francisco and L.A., where these areas have been destroyed with drugs and crime and the homeless to happen. We take those that seriously, and we believe when people commit crimes, they belong behind bars, not released back onto the street.”

“When families are uprooting from the Pacific coast to go almost 3,000 miles in search of a better life, that’s telling you something. Yes, we’ve created a citadel of freedom here that has attracted people, and we’re proud of it. But let’s just be clear, California is driving people away with their terrible governance.”

As long as it is done with Poise.

It would especially help if you put the diapers on both ends of the politician.

Newsom talks about wildfires and “climate change” the same way an Iman says In Sh’Allah to the unwashed masses – we’re fated to it. It is Gaia’s Will. That smoke we choked on for six years is Gaia Breath.

I’ve a conspiracy theory. After Jerry Brown was elected for the third time he and a federal judge colluded to depopulate our state prisons. Angela Davis’ prison abolition scheme. Not long after that we suddenly had sketchy-twitchy hoboes loitering-panhandling at the Arco gas station. We never had beggars in town. Now it’s impossible not to trip over them everywhere.

Hundreds of stripped bike frames are dumped in dry overflow canals. Not kidding. Hundreds. Huge mountains of trash. Weirdos with overstuffed daypacks riding stolen bikes down streets at 3am.

As a Floridian, I cannot express how upsetting this is. We are already dealing with overbuilding and the ruination of our waterways. I really wish we could tax transplants at twice the rate of the states they are fleeing or do….something…to discourage the influx.

How long have you
Loved there?

I was born here.

Consider that a Congressional district is about 800K. Then look at the gains and losses of the various States and project it out until the next census. Then add in the 1/2 dozen or so blue States who kept a CD and the 1/2 dozen Red States who didn’t receive a CD based on the revised 2020 Census numbers.

The 2030 Census is likely to shift between fifteen to twenty CD from blue to Red States. That’s a huge shift from today and impacts not only the HoR but the electoral college math.

Do you mean that the circumstances surrounding the 2020 Census, the Rona Mania, will be repeated to distort the 2030 Census? Even with the forewarning that we need to be very vigilant during the 2030 Census that we have another seven years to gather data on as predictors of what the official count should roughly be?

I don’t understand the constant need to indulge in worst case, catastrophic, doom and gloom as one’s preferred operating mindset. For sure be cognizant of risks and identity and implement measures to mitigate or preferably eliminate those risks. Make a solid plan, that’s reasonable. That’s prudent. That’s what responsible people do. No problem with it.

What’s not reasonable and IMO incredibly unhealthy is to live your life in fear and doubt, paralyzed into inaction or giving up because you’ve allowed yourself to be convinced that it’s hopeless to try and win before the battles are even fought. That’s a surefire recipe for losing designed by people who want to have a ready made excuse for their losses.

They should lose their representation they know they cheated

But hey, all those illegals will be voting dem with fake citizenship, so , what the hell

Voting doesn’t matter anyway, only cheating by harvesting the vote and machines that count only one way

Isn’t there some State prosecution of election fraud going on in Harris County right now following the election audit directed by the State of TX?

I saw an item about that but didn’t bookmark it. Didn’t seem to be extensive, and there’s always a little fraud around Houston. The problem in Dallas seems a little more interesting, where they apparently used uncertified software in some of the voting machines.

This is the sort of thing we should concentrate our efforts on. There’s plenty of low hanging fruit out there that needs to be addressed. Voter registration list maintenance is very straightforward. The ‘motor voter Act’ requires the States to remove the invalid registrations.

In States that use signature match v driver license # for absentee ballots the statute normally sets out who can conduct the validation and how the validation occurs. When elections officials simply decree that they will use a method that the Legislature didn’t authorize then all absentee ballots accepted under the unauthorized decree are invalid.

Just as with every other interaction with govt bureaucracy the paperwork must be filled out correctly. When individuals choose to create more potential for having their ballot rejected by using an absentee ballot v in person voting they should not be upset when their ballot gets rejected over a paperwork error. Vote in person and eliminate all those provisions instead of making the trade off for convenience.

As far as the gains from California to Washington, some of it is job driven. My oldest daughter and her late husband ran a company that repaired those big cranes that load and unload container ships. He was a wizard at it. They were based in the San Francisco Bay area, since they could not conceive of living in the Los Angeles [actually Long Beach] area. As California became crazier and as the Port of Oakland declined they decided to move elsewhere. Their choices were either Portland or Seattle. They ended up moving the company [and staff] to Portland, not because it was particularly desirable, but that was the better place for their company. When he passed, I brought her home. Don’t know where their employees ended up or if they stayed.

As far as the shift in Congressional Districts, that makes several assumptions. First, that there will be kinda sorta honest elections ever again. Second that the next census will be even marginally honest [remember the Bureau of Labor Statistics and the 10,000% deliberate mis-statement of new jobs just before the election?]. Third, that a Leftist regime would reapportion Congress to its own detriment.

It is there plan to force all the conservatives out of their states. Think about it.

Comrades Cuomo and Hochul (or is it Frau Hochul?) were very open about this as their goal.

Who’s leaving the blue states and moving into the red states, those who are more leftist or more rightist? The outmigration from CA and other left leaning states into more conservative states might have a negative effect on the overall political complexion of the receiving states. Areas that were slightly red are now going purple thanks to the people coming from the nutsy areas. That’s what concerns me.
.

I recall watching a news video about six months ago and believe it or not, they had details showing Washington gained resident from (head scratching moment) California. Yup, to escape COVID tyranny and dystopian rule.

A family from Oregon moved into a new house built a couple of blocks from us here on the Treasure Coast. He displayed a full front lawn of GOP candidate signs along with his Oregon Ducks flag.

The Dems have won ten straight gubernatorial elections in Oregon, while the Republicans have now won seven straight here in Florida. You can draw your own conclusions.

Population growth in WA may make some sense. WA is relatively sane outside the Seattle metro area. Much of it is basically Western Idaho.

No state income tax, either, though the state grabs taxes though other methods.

When you can get your opposition doing ads *for* you, you tend to win.

Consider Micro$ft’s marketing, to the advantage of anyone else. “Oh, databases are a thing. I wonder what’s a good one, to, you know, use. This SQLServer thing says — there’s better options on literally every criteria, outside being from Micro$oft, integrating with their crap, being one tiny deep-discount line item in their hegemony into your company.”

How’s that IIs working out? Now their browser is based on Other People’s Tech. But you gotta have one becasue they spent two decades telling you that.

NY State as Micro$oft — you’re locked in, and you’ll like it.