Energy Dept. has Given Over $10 Million to Green Energy Company Connected to China ‘State-Owned Entity’

Energy Dept. has Given Over $10 Million to Green Energy Company Connected to China ‘State-Owned Entity’

“Instead of handing millions of taxpayer dollars to a Chinese-backed company, the president should be encouraging American energy production and American energy independence” 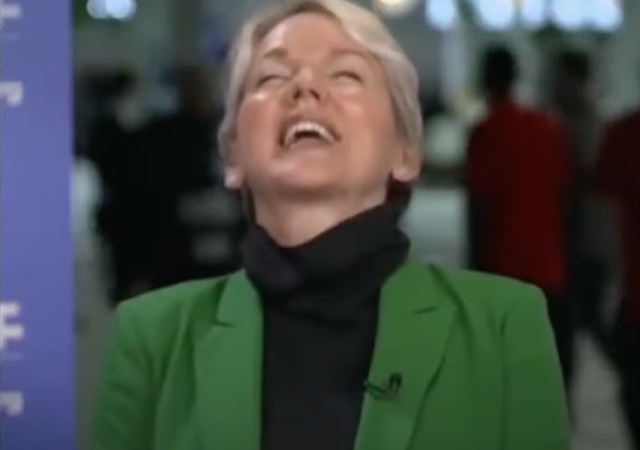 One of the most troubling aspects of Biden’s presidency is his blind devotion to green energy. From day one, Biden has treated America’s energy policy like a problem that needed to be solved and only made things worse.

Now we are learning that much like the Obama administration, Biden is playing favorites with energy companies, and at least one of them has uncomfortable ties to China.

President Joe Biden’s Energy Department funneled millions of dollars to a green energy company in the months after the company partnered with a Chinese state-owned entity that it acknowledges could face business-crippling sanctions.

Carbon capture company LanzaTech, federal spending disclosures show, has received more than $10 million in grant payments from the Biden administration since April 2021, when the company announced a partnership with Sinopec Capital—the clean energy investment arm of the Sinopec Group, a Chinese state-owned oil conglomerate also known as the China Petrochemical Corporation—to “debut an international market of new energy and new materials.” LanzaTech has acknowledged in SEC disclosures that its association with Sinopec, which China has used to purchase oil from U.S.-sanctioned nations such as Russia and Iran, could jeopardize its bottom line…

LanzaTech’s partnership with Sinopec was not the first time the company aligned itself with a Beijing-run entity. In June 2018, LanzaTech entered into a joint venture with Chinese state-owned steel giant Shougang Group to build an ethanol plant in China’s Hubei province, one of the company’s three plants in the communist nation. LanzaTech has also raised millions from CITIC Capital, a subsidiary of China’s largest state-run conglomerate. Still, the company’s relationships with Beijing did not stop the Biden administration from sending LanzaTech millions of dollars for green energy projects such as “low-cost sustainable aviation fuel.”

For Arkansas Republican senator Tom Cotton, Biden’s support for companies such as LanzaTech shows that the Democrat’s “green energy agenda is stamped with the words ‘made in China.'”

“Instead of handing millions of taxpayer dollars to a Chinese-backed company, the president should be encouraging American energy production and American energy independence,” Cotton told the Free Beacon.

This is more of the American last type of policy that so many of us have come to expect under Biden.

Meanwhile, as if all of this wasn’t bad enough, Biden’s Energy Department is also trying to infuse the progressive concept of ‘equity’ into energy policy. Energy Secretary Jennifer Granholm recently gave some remarks about breakthroughs in fusion energy. See if you can spot the buzzwords here:

.@SecGranholm: Fusion energy will be "equitable … diverse and inclusive" pic.twitter.com/2gr6iegRdY

The college campus-ification of America is nearly complete.

Imagine if this happened under Trump and the State in question was Russia. The fucking media would be blowing its load over itself in excitement.

But here we are today where the State media is busy pleasuring itself while looking in the mirror.

As the saying goes, “figures don’t lie, but liars figure.” The power required to activate the lasers was 100 times the output of the fusion reaction and the lasers can only fire once a day. Don’t know how that can be defined as a break thru. Commercial fusion power is still decades away as it has been for the last 50 years.

Gee. Sounds eerily similar to the stats on pollution saved by using batteries vs. the pollution caused by mining lithium for them.

Why not? We obviously don’t need the spare cash here.

When are people going to wake up to the fact that “climate change” is a total scam, and “green energy” pork is nothing but money laundering?

Solyndra 2.0, but orders of magnitude larger.

Hunter’s Laptop tells you all you need to know about Brandon and China.

I wouldn’t expect any better from the treasonous pedophile-in-chief or any of the deviant retards he employs.

That picture represents what all of DC is doing : laughing at the people.

The solution I have in mind would get my comment removed.

Your solution was fine as long as the threat was respected. Now that disrespect rules the conversation and the threat is glorified all day in popular culture the only thing left to do is lie.

And we’ll probably get every bit s much return for this money as we did from investing $500M in Solyndra.

China gets is payday back, what a surprise

Biden and most of Congress is owned by China.

Dems and the Biden Admin are sure spending our money overseas. The inflation figures the government tell everyone is false as the cost of gasoline, food, clothes, and other things are way higher then that. The country has $32T is debt so we should not be sending any money overseas and cut our costs to the UN to $1. No money for any illegals and cut all federal spending.

Boy, China sure is reaping the rewards of all that money Biden, Inc was paid.

Green energy? I’ve got mountains of green energy to give the lady! Has she ever ridden a trebuchet even as far as a football field? What a rush!

This looks a lot like Biden repaying his paymasters.