The Chinese people are struggling to find relief, as everyone is being hit with highly contagious variants causing cold- and flu-like symptoms all at once. 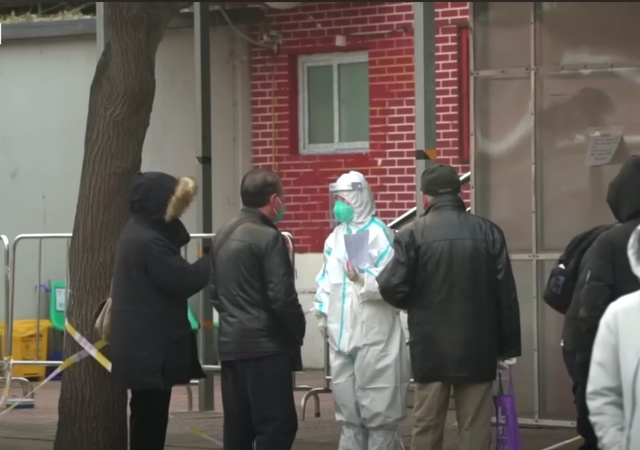 I recently noted that China’s Great Wall of “Zero Covid” was crumbling rapidly.

Now more reports indicate that the Chinese government is fully embracing the realities of handling the uncontainable virus, as I discussed during my review of the Russian Flu.

To begin with, China has stopped reporting asymptomatic cases of covid. As always, it also neglects to highlight covid deaths.

China’s National Health Commission (NHC) will as of Wednesday stop reporting new asymptomatic COVID-19 infections, as many people without symptoms no longer participate in testing, making it hard to accurately tally the total count, it said.

There were no new deaths, the same as the previous day, keeping fatalities at 5,235.

The nation also deactivated a state-mandated mobile app used to track the travel histories of a population of 1.4 billion people…but only after a ton of personal data had been collected on the activities of its citizens.

The app that identified travellers to COVID-stricken areas will shut down at midnight on Monday, according to a notice on its official WeChat account.

The app has collected a huge amount of personal and sensitive information and the data should be deleted in a timely manner, Liu Xingliang, a researcher at the Ministry of Industry and Information Technology, was quoted by state radio as saying.

When such apps were launched three years ago, critics expressed concern that they could be used for mass surveillance and social control of the population.

The Chinese people are struggling to find relief, as everyone is being hit with highly contagious variants causing cold- and flu-like symptoms all at once.

Residents have also complained of long lines at pharmacies and cold medication selling out. Agence France-Presse reported a black market had emerged for rapid tests and some medications being sold at inflated prices by “dealers” whose contacts are being shared on social media groups.

Online healthcare platform 111.inc had begun selling Pfizer’s oral treatment, Paxlovid, on the retail market, after it was previously only available through hospitals. But sold out within half an hour of it being reported by media, according to Reuters.

It wasn’t clear how many boxes – priced at more than $400 each – were sold, or when they would be restocked, but Pfizer told Reuters it was “actively collaborating with all stakeholders to secure an adequate supply of Paxlovid in China”.

Businesses across the nation are dealing with massive numbers of sick employees.

Anecdotally, in cities like Beijing and Wuhan, many workers and their families have succumbed to COVID, although official case numbers have fallen to under a fifth of a Nov. 27 peak as China now conducts much less testing.

“More than half of our staff in the mall and the hotel are positive,” said a senior executive at a firm that manages one of Beijing’s largest retail complexes.

The executive, who declined to be identified, said the mall was still open with remaining staff splitting into two teams and only one team working a particular shift.

The US Mission in China indicates that there is a reduction in non-emergency services in some areas, and further disruptions are possible as the country goes rapidly from “Zero Covid” to “Full Covid.”

The good news for the Chinese is that after 4-6 weeks, herd immunity should be in good shape. The bad news is that the virus will be back in more waves as new variants begin to arise, and China’s surveillance game has never been stronger.

Meanwhile, Sweden laughs at us all.

Despite lockdown hysteria during peak Covid, Sweden ended up recording one of the lower death tolls thus proving the feasibility of anti-lockdown policies. pic.twitter.com/KAgByiEkz8

Aren’t they supposed to have a vaccine before they deploy the biowarfare?

I wonder what their flu numbers are?

It appears COVID actually brought som one back from the dead in Norway.

*Someone. Sure would be nice to have an edit feature.

Bio warfare boomerangs. May these variants wipe out the CCP.

I think they are going for full herd immunity now because they fear worse variants are coming. They know Omicron is mild. Someone is going to cook up a MERS-SARS2 hybrid in a lab and unleash it. Probably some actor in a war will do it.

Absolutely NOBODY actually believes that China EVER had ‘zero covid’.

They’ve been lying about it from day 1, and jackholes like Fauci just pretended to believe it because they wanted to lockdown the country.

Dr. Birx said nobody believes anything coming out of China right now on national TV. Funny, that’s been wiped away. My searches lately for things I know happened have substantially degraded in quality. It’s time to move on from DuckDuckGo.

DuckDucKGo exposed itself as a steering engine a la Aphabet/Google, Yahoo, Bing, with or without government mandates. That said, bias is intrinsic, prejudice is progressive.

If the CCP were serious about the health of their people, they could buy the kits, giving them to each diagnosed person and that person’s contacts. Then they wouldn’t have to seal up health people in whole buildings, and watch them die if something catches fire.

If only you could legally import said kits into the US.

So, take the dumbest strategy to it’s extreme then act surprised when it doesn’t work., THEN, you do the opposite of flattening the curve, making certain that the death count will increase massively among the vulnerable populations. It’s like they got the absolute worst of both worlds. I’ll bet the communists here will want to emulate this to the tee.

If you know a far worse variant will emerge from a lab in Ukraine, Iran, or who knows where else, then going for full herd immunity now makes sense.

NYeT. Never. When the WaPoo hits the fan, and not even then. The illegitimate regimes in Kiev and Wuhan-style labs in Ukraine are beyond scrutiny.

The State has a compelling cause to elect planned parent/hood (i.e. principal at-risk cohort) in the woke… wake of gender dysphoria forced by planned parenthood ethical prescriptions that selected female babies… fetal-babies.

Because, of course, it can’t be cold and flu viruses causing these symptoms.