Border Crisis: Over 73,000 ‘Gotaways’ in November, Another Record High

Border Crisis: Over 73,000 ‘Gotaways’ in November, Another Record High

A border patrol agent explained why the numbers keep growing: “No support. No backup. No leadership.” 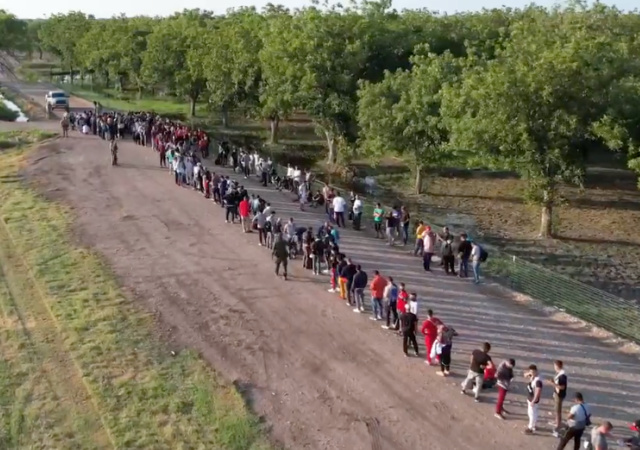 Fox News reported that over 73,000 “gotaways” snuck by the border patrol in November, a record high.

At least 2,400 illegal immigrants avoided the border patrol every day in November.

The “gotaways” are illegal immigrants “detected by other forms of surveillance but not caught.” The number does not include “those who are not spotted.”

President Joe Biden’s administration has seen record numbers at the border since January 2021, and none of them are worth celebrating.

A border patrol agent explained why the numbers keep growing: “No support. No backup. No leadership.”

The numbers show the Biden administration will keep setting records in FY2023.

A court overruling Title 42 might make the problem worse. The government used Title 42 “to expel a majority of migrants” because of COVID.

Senate Majority Leader Chuck Schumer finally admitted the end game out loud: “We have a population that is not reproducing on its own with the same level that it used to. The only way we’re going to have a great future is if we welcome immigrants… get a path to citizenship for all 11 million [illegal immigrants].”

Schumer might not get his way even though the Democrats will keep control of the Senate.

Arizona Sens. Mark Kelly and Kyrsten Sinema, Montana Sen. Jon Tester, and New Hampshire Sen. Maggie Hassan demanded answers from Mayorkas about how the administration will handle the end of Title 42 and a possible migrant surge.

Rep. Kevin McCarthy, who might become speaker when the new Congress convenes, told Mayorkas to resign or face possible impeachment.

“He cannot and must not remain in that position,” said McCarthy during a border visit. “If Secretary Mayorkas does not resign, House Republicans will investigate every order, every action, and every failure. We’ll determine whether we can begin an impeachment inquiry.”

The “letthemgetaways” far outnumber the “getaways.”

Fortunately that number will never be known—for if it were known we would all have a heart attack and die.

That’s an important distinction. We need to stand with our fellow Americans who are performing beyond the call of duty in perilous times, good for Americans, good for others, too, when they realize immigration reform is not a viable substitute for emigration reform.

The Dodd decision allows the States to create alternative abortion policies than the previous 50 years which would significantly impact the replacement rate of our native born population. Somebody needs to clue Schumer, the d/prog and their chamber of commerce allies in about that.

The 1-2 compromise (“Fetal-Baby”), inspired by the 3/5 compromise to mitigate progress.

That said, there is mystery in sex and conception!? And underage girls raped in darkness can still cross the border to abort, cannibalize, sequester “burdens” in sanctuary states.

No photo op there for sure

Made him the “man”

It would be nice if we had the wall we were promised.

America is not viable… laments, of all people, Schumer, we need immigration reform.

Why even comment anymore? Present estimation is that 1 in 10 people are here illegally. They won’t be leaving. This is a unified Western Globalist plan that has turned the UK into a minority white and Judeo-Christian country while creating Eurabia. The only question is who finally benefits from the success of Cloward and Piven?