Biden Preaches Unity at Christmas, Thinks Everyone Has Forgotten His Red Sermon

Biden Preaches Unity at Christmas, Thinks Everyone Has Forgotten His Red Sermon

“too often we see each other as enemies, not as neighbors. As Democrats or Republicans, not as fellow Americans. We’ve become too divided.” 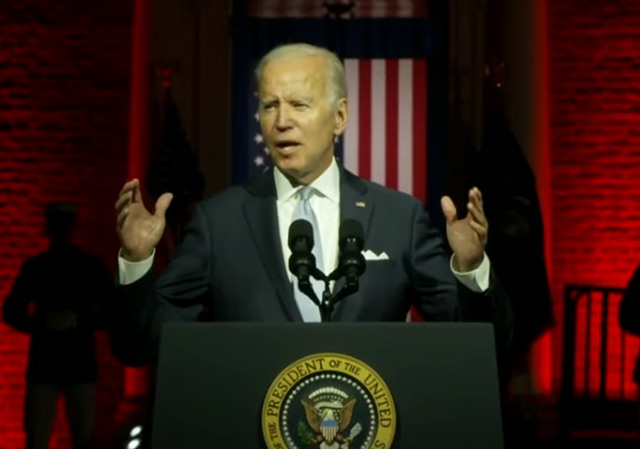 Joe Biden is apparently very concerned about how divided we have become politically, as a people. That’s nice. Has he forgotten about his ‘red’ speech, in which he accused half of the country of being fascists?

His new message seems too little, too late.

President Joe Biden is calling on the country to “spread a little bit of kindness” this Christmas season in hopes of easing the partisan tensions plaguing U.S. politics.

Biden donned his “uniter-in-chief” hat during his annual Christmas address, delivered from the White House on Thursday, and stated that “Christmas has always been the season of hope.”

“The messages of hope, love, peace and joy: They’re also universal. It speaks to all of us,” he continued. “This Christmas, let’s spread a little kindness.”

Biden specifically said that over the past few years, “too often we see each other as enemies, not as neighbors. As Democrats or Republicans, not as fellow Americans. We’ve become too divided.”

That’s quite a contrast from Biden’s speech in September, isn’t it?

"Donald Trump and the MAGA Republicans represent an extremism that threatens the very foundations of our republic," says President Biden in a rare prime-time speech https://t.co/YbYbUHwXpt pic.twitter.com/RBm88Rn9r2

Now he is concerned about anger.

BIDEN: "Our politics has gotten so angry…" pic.twitter.com/jXZizWXsqo

Yes, we’re so divided, Joe. How did that happen?

That was the most demagogic, outrageous, and divisive speech I have ever seen from an American president. Joe Biden essentially declared all those who oppose him and his agenda enemies of the republic. Truly shameful. pic.twitter.com/ZcJX2BbZlt

A speech about the “soul of the nation” which looks like it’s made from hell pic.twitter.com/l5v1LAA0WW

Ironic optics for a speech centered on accusing the opposition of authoritarianism. pic.twitter.com/vX82v7FwFx

This image will be shared throughout history of the most evil and worst President in U.S. History. pic.twitter.com/WYdqVjAo9r

Forgive me if I don’t rush to unify with a president who basically accused half of the country of being Nazis just a few months ago, Christmas or not.

When you refuse to fix real issues but pound the table on existential crap we need a new government. We could have had that if enough people would have vetting candidates early last year. Voting for the letter behind the name is not vetting.

Voting for the letter behind the name is not vetting.

I’ve been preaching that for decades.

Wouldn’t t matter they got the cheat down. They are always going to win and even when they lose. , the republicans are actually democrats and push their policies, like the Omnibus

So don’t even bother to vote? Is that your “winning” strategy?

Why lend legitimacy to their fraud?

Great plan. They won’t even need fraud. They can claim that they get the majority of the vote… and they won’t be lying.

Lots of ammunition and defending my home from the communists.

“Lots of ammunition and defending my home from the communists.”

So you don’t have a plan except to hunker down and hope they’re stupid enough to try and take you alive? They’ll cut your power, cut your water, cut your sewage, and wait. Or they’ll just burn your house down with you in it.

I asked you what your plan was, and all you could come up with was that? Let them take complete power, and then wait your turn to die? You’re useless.

Did you have a better idea? Don’t even mention elections, they’ve perfected cheating those. So when a peaceful solution is impossible, the alternative is the only way. Any communist that comes on my property uninvited won’t walk back off, and there aren’t any invited.

You can be sure that any more proactive plans anyone here may have won’t be shouted recklessly into the glow.

While it is likely true that folks would be imprudent to list out a plan it is equally true that without the disclosure of the plan we don’t really know if:
1. They have a plan
2. Whether the plan is workable

Realistically, outside of catastrophic circumstances which none of us should hope for, the only workable plan is to fix our own families and community institutions Then work with like minded people Statewide to fix their State govt and institutions.

How many people via Rona Mania have come to know the name of their County Health Officials, what their powers are, how they are selected and which other elected officials appoint them? Same for School Boards. People are finally paying attention instead of being distracted by daily life. The real question is how long will the voters continue to pay attention? How long before they get bored and return to watching their favorite TV shows? How many never got involved because they foolishly listened to someone telling them it was too hard or too uncertain or too unlikely to even try?

The doom and gloom brigade telling us elections won’t work due to reasons have already chosen to be defeated. Those who refuse to fight have lost in the own mind before they lift a finger. The d/prog love that defeatism because it makes their victory easier to achieve.

No one is going to save us. We must not refuse to work towards saving ourselves. There is no white knight riding in to do the work of defending us and defeating our opponents for us.

Most people find it hard to vet candidates when the Intel agencies are manipulating the elections via their control of the press.

John Adams: “Our Constitution was made only for a moral and religious People. It is wholly inadequate to the government of any other.” IMO Brandon is a nasty piece of work, who managed to leave Christ out of his Christmas message.

I’m not religious and I live by high standards of ethics, not “morals”. Yet, the Constitution is VERY much for me, and with the exception of some of the Terrible Teens in the Amendments, I am very much for it.

The Democrats call for bipartisanship whenever Congress is controlled by two different parties. Note that bipartisanship means bribing Republicans to pass Democrat legislation.

Biden’s call for “unity” is as tempting as Oster’s call for “COVID amnesty” was.
Fuggemall.

I read his garbage message, it was a political propaganda trying to be religious as thin as it could be

Make no mistake about it, this guy is a vile, nasty piece of sh*t and he always has been. He invented the modern-day practice of ‘Borking’ Republican SCOTUS nominees. He’s tarred half the country as terrorists, including mothers who are upset that proggie freaks are trying to convince their children to cut their genitals off.

Anybody who tries to convince you that he is a ‘uniter’ is either a liar or a moron.

Nope, there will be no unity under that illegitimate pedophile. There are no discussions of values with people who have no values.

McConnell then chimes in that some people just don’t understand how important HIS leadership and HIS ideology is to working with the Dems. Suppressing MAGA would mean he can continue directing the GOP in HIS direction. Too long in D.C. … too long ruling rather than representing the great unwashed…. those that don’t understand D.C. politics.

How about draining the poison from DC? I’m certain that at least 95% of Congress deserves to be behind bars. Probably even some that deserve to face a firing squad.

And, last I looked, there’s no ripe or lamp post shortage.

Fascist isn’t in essence The Maximum Leader, it’s the bundle of aligned like interest. Der BidenGaffer doesn’t need to make policy sense, run the govt, or even his own White House. He’s a figure head holding cultural space for the mission, mechanism, and messsage.

This time they selected a guy who will biologically self-remove at the right time — a new level of cynicism.

Joe has dementia. However, his teleprompter can’t inspire unity when it writes off half the country.

“President Joe Biden is calling on the country to “spread a little bit of kindness” this Christmas season in hopes of easing the partisan tensions plaguing U.S. politics.”

Regarding the headline: Are we ready to call “Biden … thinks” an oxymoron yet?