Ducey began the project to fill in the gaps in the border wall. He wanted to stop more illegal border crossings, which have been straining the state. 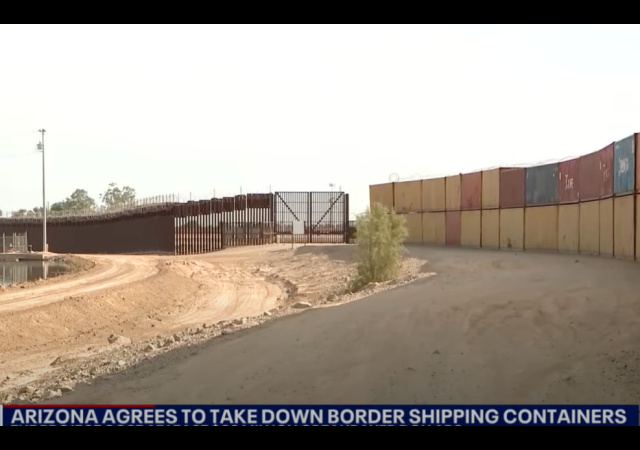 Arizona Gov. Doug Ducey agreed to dismantle a border wall constructed from shipping containers to settle a lawsuit with the Department of Justice.

Ducey began the project to fill in the gaps in the border wall. He wanted to stop more illegal border crossings, which have been straining the small towns along the border.

The DOJ filed the lawsuit a week ago:

After a two-week standoff between protesters and construction crews building a border wall made of shipping containers, the Department of Justice filed a lawsuit Wednesday against Arizona, accusing it of trespassing on federal land.

The lawsuit asks for “immediate injuctive relief prohibiting” the state from continuing work on the wall, which federal officials say is being built on federal land without the required permits or authority.

Ducey agreed to stop building the wall and remove the erected containers by January 4.

“Arizona agrees to maintain its cessation of activity on National Forest System lands within the Coronado National Forest for any purpose relating to installing shipping containers along the international border (where ‘installing’ includes, but is not limited to, movement of equipment, staging, roadwork, welding, and installation of concertina wire),” according to the court document. “In moving shipping containers, equipment, and construction materials to cease its installation activities, Arizona will confer with representatives from the U.S. Forest Service for safety purposes and to avoid and minimize damage to the United States’ lands, properties, and natural resources.”

As Mark Steyn says…when the Repubs win they are in office… when the Dems win they are in power. Using the force of the leviathan to crush their state opponents. The Supreme Soviet has spoken.

When your government refuses to protect you. What good is it and why allow it to continue? That is the government’s only reason to exist.

This was always a stunt designed to do four things:
1. Show that an effective barrier can be built quickly
2. Demonstrate the deterrence value of a barrier
3. Draw National attention to gaps in our border deliberately left by the Biden WH and d/prog
4. Force the Biden DoJ to go on record to dismantle the barrier and clearly reveal their priorities don’t include security along our border

From that perspective it was successful. The most pro border security /anti illegal immigration President we have had since Eisenhower was unable to get a border wall fully built during his term. It’s going to take more than a President, it will take electing a critical mass of folks to Congress who will support border security.

Your statement is partially correct. Trump did ask for the $ in his budget for a border wall then Ryan and McConnell sent him a budget without the funding. That’s very true and was disgraceful, IMO.

It’s also true that Trump chose not to invoke his veto power on the budgets lacking his requested funding for the border wall. In fairness there were lots of reasons for that decision not to use every weapon at his disposal to fight for the funding.

Doing so would likely have either broken the back of the DC establishment, fractured the r party coalition or resulted in a stinging defeat if his veto was overridden. At the end of the day Trump did choose political expediency over making a principled stand on securing the funding by using his veto power in his first budget request.

CommoChief,
Part of your above comment was shared on Instapundit tonight at about the 8:15 pm mark…
https://instapundit.com/

Trump couldn’t choose to die on every hill. Which is what it would have taken.

Build the Wall was THE signature campaign promise of DJT. That was an easy concept to sell and for voters to grasp. That’s the major reason reason people voted for him.

Your suggestion that DJT was correct to abandon his pledge to build a wall is completely unserious. Trump is gonna have to explain why he chose not to fight the establishment to deliver on his promise in order to win back skeptical voters.

Cool. Thanks for pointing it out. I rarely go over there anymore so I had no idea. Even a blind squirrel finds an occasional acorn so I promise not to let it go to my head.

“But when a long train of abuses and usurpations, pursuing invariably the same Object evinces a design to reduce them under absolute Despotism, it is their right, it is their duty, to throw off such Government, and to provide new Guards for their future security.”

So the containers are on federal land (apparently), and the state didn’t get the proper permits.

Not easily solved. The state can’t issue itself the permits. It needs to beg the feds for them, and the feds don’t want this so they’ll say no. End of story. The state can’t do it because it doesn’t own the land.

Pile them up on Mexican land on the far side.

Build the wall along the inside (US-facing) of the border of the federal land.

Our constitution defines out borders by mets and bounds. Theirs says they must purchase lands from the state in order to claim/use them. I’m betting the fedguv has no such receipts for this particular land.

The Founders specifically included “domestic enemies” for a reason.

Our govt, particularly the feds have not been for us for some time. Look at the rhetoric, scolding, demanding, extorting, exprpriating from us, for the benefit of international order, other countries, people far and hostile, other economies, etc.

Our federal govt is run to extract from us, for the benefit of not us, with the administrators collecting carrying charges for their trouble, while patting themselves on the back for their good works.

The pan-national answer always seems to be around $100 million a year coming from mostly the US, pushed through some new authority at the UN for the next 10 years to start. They’re not much for nations, except when it comes to identifying who gets stuff — not us, extracted from whom — us.

Ohh, I thought the Sundowner administration was all about the border being secure.
Fkin lying bastards

The election is over Ducey and his RINO crew no longer have to pretend to care about the border.

What are you talking about? What else could they do? They couldn’t fight this lawsuit because they were obviously in the wrong. They didn’t have any arguments to make against it. But they made the point loud and clear: the wall can be finished and the only one standing in the way is Biden.

Arizona must dismantle border wall and put up welcome mats immediately. Anything at all that would discourage an illegal alien from crossing the border must be removed and replaced with a happy face.

The welcome mats are included in the.Omnibus bill.

Welcome to America. Florida’s Oranges are over there and need picking. Thanks, Nancy P.

That said, emigration reform to mitigate progress at both ends of the bridge and throughout.

Where is the Arizona state border and what prevents AZ from putting barriers there?

It’s on federal land, and the federal government refuses to allow it.

At the very edge of the easements, plant land mines and claymores.

In addition to the “target practice,” of course.

He’s talking about the border between the federal land and land under state jurisdiction. The state’s wall doesn’t have to be at the international border.

That seems much more accurate….

States need to opt out of all the federal programs and give up the handouts.

That’s not a good idea been tried and didn’t work. How about instead of that we have an eviction instead? Tell the States like CA, WA, Oregon, Illinois and so on to GTFUO and create their own Nation instead of working to destroy ours?

Not from the USA, we’re the real USA, rather from the cabal of thiugs that has been running things for 50+ years. The deep state, the corporation. We need to secede from them and show them we are our own soveriegns and don’t recognize them any more.

America has become a mirror of a bad Blacklist episode

Acquire through acquisition or condemnation, the private land adjacent to the federal land and build the container wall. Can’t imagine private landowners being overrun by illegals would object.

Intersting that FedGov, who CANNOT LAWFULLY own or control that land, are fine with thousands of foreign invaders crossing that land they oughtn’t own/control but let a state GOVERNOR step up and DO something about the problem FedGov created and perpetuates, and they are of a sudden all knicker-be-knotted because “you are USING OUR LAND without paying the proper fees.. which are not legal for them to assess or collect.

Gov of AZ should stand firm. Let them sue, and show n court that FedGov have NO lawful “possession” of those lands. They rightfully belong to the State of Arizona.

Remember when the Federal gov’t was accountable to the states? Good days. The only Federal land which should exist is Washington D.C. Aside from that, the Feds should have to get permission from the states when they need to utilize land, not the other way around.
Alas, we’re far from the federalism which was originally intended, and there’s no going back.