There’s no indication so far that Hofstra did anything wrong, besides hiring too few non-white people and too few female adjunct faculty. 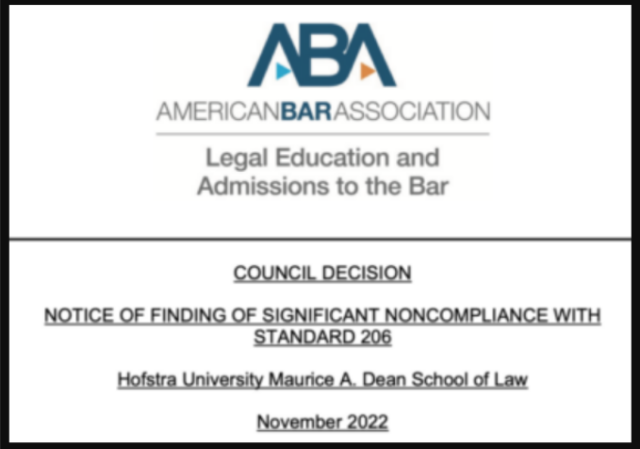 Law school accreditor the American Bar Association has found Hofstra University School of Law to be “not in compliance with Standard 206(b), with respect to full-time and adjunct/part-time faculty.”

Standard 206 is the ABA’s Diversity and Inclusion standard. Subparagraph 206(b) reads:

(b) Consistent with sound educational policy and the Standards, a law school shall demonstrate by concrete action a commitment to diversity and inclusion by having a faculty and staff that are diverse with respect to gender, race, and ethnicity.

What exactly did Hofstra do wrong?

The ABA has asked Hofstra to submit a written report explaining its failure to be diverse and inclusive, and to appear in person at the ABA’s August 2023 meeting.

The Law School has been asked to submit a report by March 31, 2023, and to appear before the Council at its August 17-19, 2023, meeting. The Council will consider the written report at its May 11-13, 2023, meeting. If the information provided in the written report demonstrates compliance with the Standard listed above, then the Council will find the Law School to be in compliance with the Standards and cancel the hearing.

The decision notice doesn’t say what Hofstra needs to do to be in compliance. Would the ABA find the school compliant if the numbers don’t change? Or is this a poorly-veiled threat to hire more “diverse” faculty fast?

With accreditors like this, it’s surprising that universities don’t approach all faculty searches these days with a “no white men need apply” attitude. Title VII of the Civil Rights Act of 1964, which prohibits employment discrimination based on race, color, religion, sex and national origin? American universities act as though they never heard of it. The Equal Protection Clause of the Constitution’s Fourteenth Amendment, guaranteeing that no state shall “deny to any person within its jurisdiction the equal protection of the laws”? Today, many state universities act as though it doesn’t exist. When it comes to treating all races equally, in 2022 America, some races are more equal than others (as Orwell would have said).

Hofstra should thank its stars that the ABA didn’t move forward (yet?) with proposed revisions to 206 that would have made the standard even more extreme. The proposal – which LIF President William Jacobson opposed in a comment letter – would have imposed illegal quotas by all-but requiring schools to hire faculty and admit students in the same proportion as their races and ethnicities are represented in the United States population as a whole. At some point, pushback against the proposed changes persuaded the ABA to drop its plan to move forward last summer, two and a half months before the Supreme Court revisited the legality of racial classifications in school admissions.

There are six black law schools which are accredited by the American Bar Association. None of them have encountered any difficulties for insufficient diversity.

The “logic” behind a requirement that each and every law school student body and level of employee staff have the same demographics as the Us general pop is ludicrous.

For instance, in the US the avg black pop is just over 13%. When choosing a college many students choose a nearby one, both for ease of travel and tuition assistance. 28 of the 50 states average less than 10% black. Majority of those are <5%. When you consider that only 6.6% of US lawyers are black – and <8% of applying YS law students are black, how is this even an attainable goal?

its (imho) idiotic feel-good nonsense to require demographic correspondence to the general pop for a specific employee sub pop.

What if they were just hiring the best candidates they could find?

The ABA is such a joke. Dropped my membership after the first year.

Ha! A not so fine line separating affirmative action and affirmative discrimination. DIE, indeed, but, not a wicked solution, not quite.

I must admit that my very first thought after seeing the header was something to the effect that they must have had a couple of white or Asian students or staff which knocked their score down below ABA standards.

Tilting at windmills to virtue signal. You would think these people had something better to do, something that furthers the field of law, not sociology and politics.

So at this point if I was looking for a lawyer Id be interested in anyone from this school on the thinking they haven’t been corrupted by Democrat thinking…yet!

If they cave and start admitting people solely on the basis of skin colour then my search for a half competent lawyer continues.

When looking for a lawyer, you should consider asking whether they are a member of the ABA. If the answer is “yes”, then you need to keep looking.

When are they going to show ANY benefit to all this “diversity?” The only “benefit” is to professional whiners and mau-mau artists. What was Moochelle doing for her $300K “salary” all those years? It’s a shakedown

This really is the point, isn’t it.

University budgets probably benefit from “diversity” in admissions, since this means “affirmative action”, which means admitting students who are less qualified and more likely to drop out before getting all the services they paid for with their tuition.

Wouldn’t it be delicious to have Hofstra University sue the ABA and win?
I mean, wouldn’t that kind of prove where the best lawyers are?

Wait til this gets to the NBA