Penicillin is the top medicine against bacterial infections. 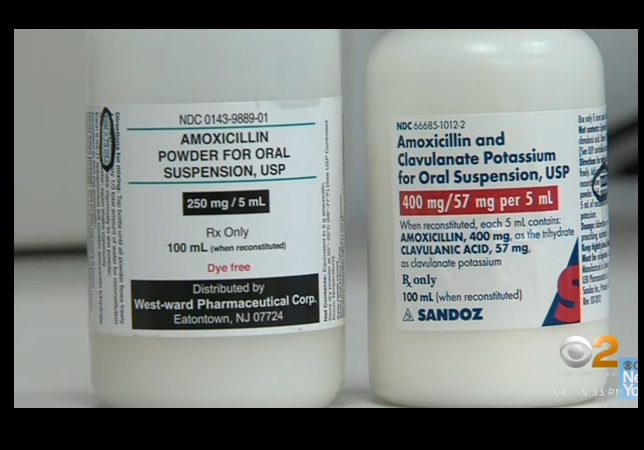 The U.S. Food and Drug Administration reported a nationwide shortage of the oral solution of amoxicillin, an antibiotic widely used for bacterial infections.

Amoxicillin, a popular antibiotic in the United States, has over 15 million prescriptions written each year. It is the first-line therapy treatment for many acute bacterial infections, according to the Centers for Disease Control and Prevention. It is commonly prescribed for children to treat conditions such as ear infections, strep throat, sinus infections, whooping cough, and urinary tract infections.

“The FDA is aware of some intermittent supply interruptions of amoxicillin products in the U.S., and is currently working with the approved manufacturers,” the FDA told multiple outlets.

In late summer, I noted a surge in the number of Respiratory syncytial virus (RSV) cases in children. It turns out that the main factor in the shortage is the widespread use of antibiotics to treat these infections.

The drug is used to battle secondary infections associated with  RSV.

One issue could be that the pharmacy has the drug in stock, but not in the strength needed for the prescription, so it may require some back and forth between the pharmacy and the prescriber, CNN reported.

“I think it’s going to be challenging for doctors and prescribers to give their patients a prescription that they’ll then be able to get filled, because pharmacies are going to have a variety of different strengths in stock, and you hate to have that delay of the back and forth, especially for an antibiotic they usually want to get started pretty quick. So I think it’s going to be a frustrating shortage,” Erin Fox, a senior pharmacy director at University of Utah Health, told CNN.

In the meantime, the FDA is working with manufacturers to prevent further shortages or reduce the effects of any delays, CNN reported.

Representatives of one pharmaceutical manufacturer indicate supply chain problems are also an issue.

Another company, Sandoz, told CBS2 they are seeing a significant increase in department resulting in “a supply situation” for some antibiotics, including amoxicillin.

“The combination of rapid succession of the pandemic impact and consequent demand swings, manufacturing capacity constraints, scarcity of raw materials, and the current energy crisis means we currently face a uniquely difficult situation. We are working with key stakeholders including governments to find ways to manage this critical situation,” Sandoz said in part.

They added, “We remain confident in our ability to supply these critical medicines long term and are on track to strengthen the supply reliability of our antibiotics currently low in stock.”

They are working on it with baby formula team…

Let in 5 MILLION illegals , use up American citizens diapers, formula and antibiotics

They are lying to us. The meds are going to Ukraine.

Why does keep feeling more and more like it’s all being staged?

Because it is. It’s all deliberate.

It’s not staged. The meds are going to Ukraine. The Adderal is to keep soldiers awake and the amoxicillin which is made is Israel as Sandoz is an Israeli company is going to the wounded and sick.

Note: RSV STANDS FOR RESPIRATORY SYNCYTIAL VIRUS. Amoxicillin does nothing to viruses. It may be used to prevent secondary infections, but that is strongly cautioned against unless the patient is particularly at risk

Seems the RSV “epidemic” (who knows if it is really an epidemic?) is being rolled out as the crisis du jour, to blame for everything, including shortages of a drug that is only used for bacterial complications of the RSVirus.

“… the FDA is working with manufacturers to prevent further shortages or reduce the effects of any delays, CNN reported.”

Well with FDA on the case I can now rest east at night.

Yep. They did such a bang-up job with the baby formula thing I’m aquiver with anticipation at their solving this one.

If wishes were fishes we could all have a fry….

The Amoxicillin shortage has been happening for a while now. It’s not new, it’s been going on for a few months now.

Maybe some of those labs that are being used to create more deadly forms of virus could be converted to make something useful.

The fruits of globalism at work. The global supply chain works until it doesn’t. Nations need the ability to source components domestically or from reliable partners. They need the domestic capacity to produce the precursor compounds and the final product.

Where are these drugs and their precursors manufactured?

If not 100% in the US, then why not? Haven’t we learned our lesson about the Chinese Communists and their desire to crush us under their boot?

We have, our overlords haven’t.

if you’re gonna insist on being The Ministry of Foods and Medicines, what works, and doesn’t is all on you. I can’t get the thing that we all know would help me. You insisted on being in charge — that’s on you. (Do not get me going on “off label” uses, health costs of slow / withheld approvals, manipulated thresholds for confirmation and label claims, and supply throttling.)

The failure to spin up drug precursor production during Orange Crush I — remember that one — illustrates both the systemic problems, and the mechanism of The Donald’s in office implementation failures. He didn’t realize who he was dealing with. The people you’re dealing with don’t need the deal on the table to work, for them to cash out. Indeed, it’s often better for them if it doesn’t.

Here’s the story, for those who forgot.
— Drugs not available because of supply interruptions for precursor chemicals, mainly from production in China.

— The Donald’s administration spun up funding / sponsorship for rapid supplyer development, building on chemical synthesis capabilities and infrastructure still present in the remains of Kodak, in Rochester, NY.

— Scandals ensued, from stock pre-running on the announcement.

— Nothing useful got done.

And here we are. Can’t get your shot for tonsillitis. The Donald were dealing with latter-day-Kodak corpse-grifters, feeding off what was built by others before them. I got heads’ up to go buy stock from a 20-year retiree, still connected to the swarm n exploit network. They spent all their time looking at where the next spasm was gonna land.

Based on his actions, The Donald thought he was dealing with people who would make their money by making things. These pitches are subtle — yes, there’s up side from making the new thing, but somebody else is gonna magically do it.

Wait, they need Constitutional authority for their Authoritah? Quaint notion.

Wickard v Filburn. It needs to be overturned as it is the root of much federal mischief.

Thanks–I looked it up. “An Ohio farmer, Roscoe Filburn, was growing wheat to feed animals on his own farm. The U.S. government had established limits on wheat production, based on the acreage owned by a farmer, to stabilize wheat prices and supplies. Filburn grew more than was permitted and so was ordered to pay a penalty. In response, he said that because his wheat was not sold, it could not be regulated as commerce, let alone “interstate” commerce (described in the Constitution as “Commerce… among the several states”). The Supreme Court disagreed: “Whether the subject of the regulation in question was ‘production’, ‘consumption’, or ‘marketing’ is, therefore, not material for purposes of deciding the question of federal power before us…. But even if appellee’s activity be local and though it may not be regarded as commerce, it may still, whatever its nature, be reached by Congress if it exerts a substantial economic effect on interstate commerce and this irrespective of whether such effect is what might at some earlier time have been defined as ‘direct’ or ‘indirect.'”[2]

The Supreme Court interpreted the Constitution’s Commerce Clause, in Article I, Section 8, of the Constitution, which permits the U.S. Congress “to regulate Commerce with foreign Nations, and among the several States, and with the Indian Tribes.” The Court decided that Filburn’s wheat-growing activities reduced the amount of wheat he would buy for animal feed on the open market, which is traded nationally, is thus interstate, and is therefore within the scope of the Commerce Clause. Although Filburn’s relatively small amount of production of more wheat than he was allotted would not affect interstate commerce itself, the cumulative actions of thousands of other farmers like Filburn would become substantial. Therefore the Court decided that the federal government could regulate Filburn’s production.[3]”

Yep. That one’s been a trojan-horse for whacky tobaccy criminalization, also.

“General welfare.” The latter especially is an expression of motivation and intent, used as authorization they constantly work to drive trucks through.

Recent rulings by The Supremes against the EPA and ATF have implications for overreach. Net: “That isn’t what the legislature meant when they said ‘navigable waters’, ‘pollutants’, and ‘fire arms.”

What’s the other one that works with this overreach by re-definition; Chevron, as in “Chevron Deference.”

Net, anything you can express using words found in the authorization must be within their authoritah. (Commerce clause, general welfare, privacy penumbra.)

And, whatever the agency says is their business, the courts have to defer to the agency’s opinion.

Yet more incompetence to pile onto the pedophile-in-chief. There’s no job too big or small for that old retard to f*ck up.

BTW, as a tangent, if you have to take strong doses of antibiotics for some reason…
Make sure you help your gut bacteria regrow by eating fermented things like sauerkraut*, kimchi, kombucha, etc. They’re a lot tastier than pills and tablets. (Blecch.)

(* Make sure it’s fermented and not cooked. There’s no good bacteria in cooked sauerkraut.)

Or there is the modern ‘high tech’ approach where they ‘harvest’ your gut bacteria and make little capsules out of it. Then when you’re done with your anti-biotic regimen you consume the capsules to re-grow your own personalized gut flora. Yeah, think through the details of that and see if it doesn’t make you retch a bit like it did me.

Once I got past mushrooms, bleu cheese, and buttermilk, I lost that particular gag reflex.

I’m having flashbacks to reading “The Making of a Surgeon” by Nolen.

First the baby formula shortage, which has been going on for more than a year, yet hasn’t been resolved. Now, a shortage of amoxicillin? Does anyone have ANY confidence that this will be resolved in less time than the formula shortage? Calling for competence! Anybody out there?

They can’t make energy better — as in less bad — and energy is the easy one.

it’s like they’re trying to screw things up to distract, displace, and discipline the unruly population. Naah. They’re not that organized. I hope.