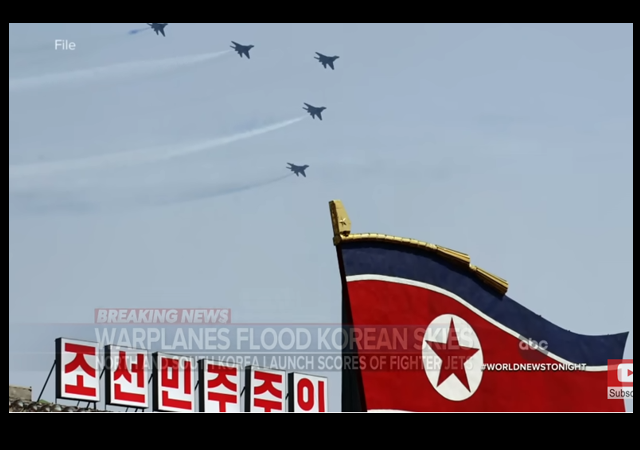 Another hot spot continues to heat up.

Just a few days ago, North Korea lobbed 23 missiles (included a suspected ICBM) into the nearby sea, including one that landed less than 40 miles from the South Korean coastline.

It is being reported South Korea scrambled dozens of jets after tracking about 180 flights by North Korean warplanes inside North Korean territory.

South Korea’s Joint Chiefs of Staff said the North Korean warplanes were detected in various areas inland and along the country’s eastern and western coasts but didn’t come particularly close to the inter-Korean border.

None of the planes breached the South Korean military’s virtual “tactical action” line 12 to 31 miles north of the Koreas’ land and sea boundaries for monitoring purposes to give the South enough time to respond to provocations or attacks.

South Korea still scrambled about 80 of its own warplanes, including an unspecified number of F-35 fighters. There weren’t any immediate reports of clashes.

After Thursday’s suspected ICBM test, the US and South Korea announced they’d extend the drills for an extra day until November 5, a move denounced by a North Korean official as a “very dangerous and false choice,” according to state media.

Later, after meeting with his South Korean counterpart at the Pentagon, US Defense Secretary Lloyd Austin accused North Korea of “irresponsible and reckless activities.”

“We’ve said before these kinds of activities are destabilizing to the region potentially. So we call on them to cease that type of activity and to begin to engage in serious dialogue,” Austin said.

Remember, those of you who support Putin that this is your ally and you need to support them to the hilt.

What on earth are you babbling about?

You should do more shots before posting. I’m sure you’ll be even more articulate and interesting.

The repeated, ever-increasing military drills by N. Korea and by China set the stage for war. The drills become so frequent that they become “normal” and their targets become complacent, believing it is all just a show. Then the war begins.