North Korea Launches a Barrage of Missiles; One Lands within 40 Miles of South Korean Coast

North Korea Launches a Barrage of Missiles; One Lands within 40 Miles of South Korean Coast

23 missiles launched may have included an ICBM. 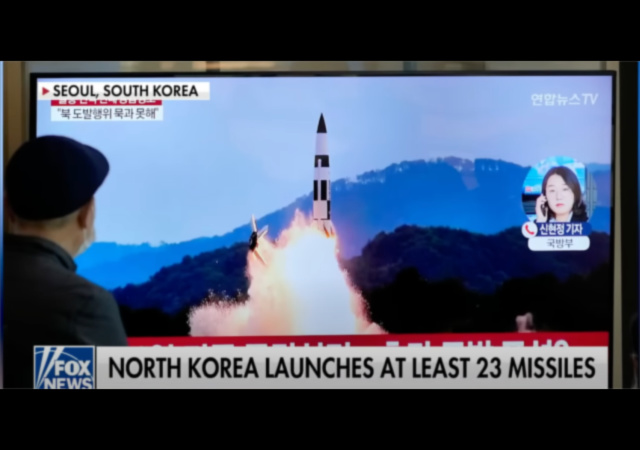 North Korea was back at it again, firing at least 23 missiles into the ocean, including one that landed less than 40 miles from the South Korean coastline.

The ballistic barrage made for the largest number of North Korean missiles ever fired in a single day — and the closest a missile from the North had landed to the South since the Korean war.

The missile landed just outside of South Korea’s territorial waters, but south of the Northern Limit Line, an oft-disputed maritime border between the two Koreas.

“President Yoon Suk-yeol noted North Korea’s provocation today was an effective act of territorial encroachment by a missile intruding the NLL for the first time since [the two Koreas’] division,” Seoul said in a statement.

At least 2 missiles passed over Japan, triggering warning alarms. One of the missiles was suspected to be an Intercontinental Ballistic Missile (ICBM).

Japan’s Defense Minister Yasukazu Hamada said one of the North Korean missiles reached a maximum altitude of 2,000 kilometers (1,200 miles) and traveled about 750 kilometers (460 miles) before his military lost track of the weapon.

The Japanese government initially feared that the suspected ICBM would fly over its northern territory, but later revised its assessment, saying there were no overflies.

Hamada said the missile “disappeared” from Japanese radars in skies above waters between the Korean Peninsula and Japan. Choi Yong Soo, a South Korean Navy captain who handles public affairs for Seoul’s Defense Ministry, didn’t offer a specific answer when asked whether the military believes the launch might have failed with the missile exploding in midair, saying that the test was still being analyzed.

The office of Japanese Prime Minister Fumio Kishida broadcast alerts through television, radio, mobile phones and public loudspeakers to residents in the northern prefectures of Miyagi, Yamagata and Niigata, instructing them to go inside firm buildings or underground.

And artillery rounds were blasted into the buffer zone.

Warnings were issued for residents in the Japanese prefectures of Miyagi, Yamagata and Niigata to shelter in their homes or go underground.

Pyongyang also fired more than 100 rounds of artillery on Wednesday into a buffer zone established in a 2018 military agreement with South Korea.

“Our military can never tolerate this kind of North Korea’s provocative act, and will strictly and firmly respond under close South Korea-U.S. cooperation,” South Korea’s Joint Chiefs of Staff said on Wednesday.

Only t0ok two years into the next administration for Trump to provoke North Korea into this kind of aggression.

I thought he was better at that.

This is what happens when you put a weak, spineless pedophile into an office designed for a man.

Not to mention Biden…

I guess Susan Rice’s request for a distraction got through

As a reminder, China/Xi control North Korea 100%. China controls the NK military. Missiles are fired at the direction of China.

Trump knew all this and used the Chinese hiding their control to wrest a bit of it away. During the Trump administration, the NK puppet met directly with South Korea and the American president for the first time. Peace was the subject and now it is war.

The left/marxists want chaos because the American people are easier to mislead during times of chaos. This is all a part of the marxist plan. China owns biden and all the democrats and most of the top republicans.

Little known fact – munitions and missile/rocket motors go bad on the shelves eventually so he could just be getting rid of old stock and trying to impress people while he’s at it.