“Seniors are getting the biggest increase in their Social Security checks in 10 years through President Biden’s leadership,” the Biden White House tweeted Tuesday. 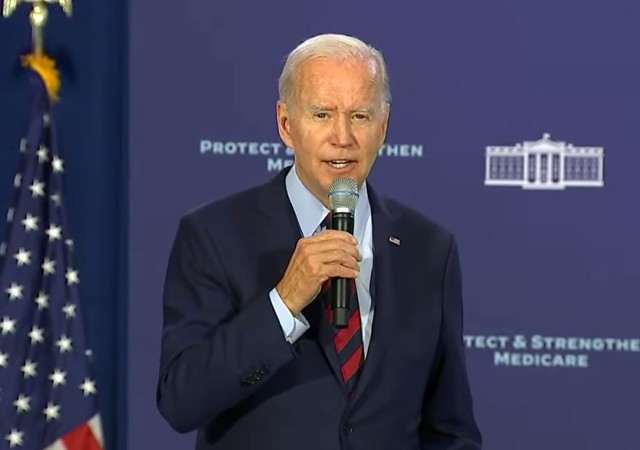 As we’ve discussed before, all too often, fact checkers will run interference for Democrats regardless of the actual facts because they see themselves as an extension of the Democratic party apparatus.

But every once in a while a whopper comes along that is so egregious that not even the most apologetic of the Democrat apologists can stand by and let it slide, which is what happened this week when the White House Twitter account made a false claim Tuesday about Joe Biden’s supposed “leadership” leading to the cost of living adjustment (COLA) seniors are set to receive in their Social Security checks starting in 2023.

In a since-deleted tweet, here’s what the White House posted:

The White House credits Joe Biden’s “leadership” for the biggest increase in social security checks in a decade, which is due to the high cost of living caused by his 40-year high inflation crisis.

As the BidenLs Twitter account correctly pointed out, the increase is actually coming not because Joe Biden declared it so but because Biden’s disastrous policies have led to rising inflation rates, which is an automatic trigger for the COLAs.

Other Twitter users also pointed this out, which led to Twitter’s contributor-based “Birdwatch” fact-checking mechanism (which was put in place nearly two years ago but which is being used more in the Elon Musk era) adding a contextual note directly underneath the tweet:

At some point after the note was added, the White House deleted the tweet and didn’t replace it with a different one:

On the same day, Joe Biden gave a speech in Florida on the issue of protecting Social Security and Medicare, where he made a similar claim:

“And on my watch, for the first time in 10 years, seniors are getting an increase in their Social Security checks. So, checks are going to be up and Medicare payments are going to be down.”

The combination of both the Tweet and Biden’s statement during that speech proved to be too much to tolerate for the normally Democrat-compliant fact-checkers at PolitiFact, which gave him a “Pants on Fire” rating:

Biden said, “On my watch, for the first time in 10 years, seniors are getting an increase in their Social Security checks.”

In reality, Social Security recipients have received an inflation adjustment for nine of the past 10 years. The adjustments are based on a key inflation measure, as mandated by a 1972 law.

We rate the statement Pants on Fire!

FactCheck.org also dinged Biden for the lie, though they softened it by saying what they think he “meant” to say:

It may not have been clear to the audience, but what Biden meant was that “for the first time in 10 years” Social Security payments would increase while Part B premiums would decrease. He has made that point before. On Oct. 13, for instance, he said of seniors: “For the first time in 10 years, their Social Security checks will go up while their Medicare premiums go down.”

But Social Security payments have gone up every year except one over the past decade. And those increases had nothing to do with presidential actions.

CNN fact-checker Daniel Dale got in on the action as well, though he also softened his a bit by suggesting Biden’s and the White House’s claims were simply missing “critical context”:

But his boasts leave out critical context: Biden doesn’t explain that the reason the 2023 increase will be unusually large is that the inflation rate has been unusually large. Nor was that context included in a misleading post from the White House’s Twitter account on Tuesday – a post the White House deleted on Wednesday after it was widely criticized and Twitter affixed a fact-check to it.

In addition, during a speech in Florida on Tuesday, Biden falsely claimed that the 2023 increase in Social Security payments will be the first increase in 10 years. In fact, there was an increase in every year of the Trump administration and the first two years of the Biden administration.

And the New York Times wrote:

The tweet, which had been posted on Tuesday, was removed without explanation a day later after it had been skewered by critics and contradicted by a new Twitter feature that allows users to fact-check erroneous assertions. The automatic 8.7 percent cost of living increase that Social Security beneficiaries are receiving is a result of inflation running at a four-decade high, not a policy achievement enacted by Mr. Biden.

What would have made the White House’s tweet correct? Adding one word: Failed.

And Biden’s remarks to the attendees of his Florida speech would have been more on the mark if he’d said something like, “Under my failed leadership, for the first time in 10 years, seniors are getting a large increase in their Social Security checks.”

Failed. A word that perfectly sums up Joe Biden’s presidency.

The Dems’ sacrificial scapegoat has no idea he is being led to the slaughter.

Lefties are merciless and ruthless. However, he deserves whatever they have planned for him.

Passing the buck is indeed leadership with minority returns.

“Failed. A word that perfectly sums up Joe Biden’s presidency.”

Well, of course, that all depends on what his goal was. I don’t think his goal was to make America great again.

Pull out everything they claimed President Trump “lied” about, cross out his name, and put in Biden, and you will have a more accurate accounting of this disaterous regime.

Too much work! Just lean back and say, “Orange Man bad.”

Replacing Russia with China and Ukraine would help

The MSM got the memo: Brandon is on the outs. Hang him.

With Twitter shifting back towards a neutral setting the news cycle accelerated the timeline. Usually the d/prof have 48-72 hours to tell lies and make false claims before the pushback begins. A d/prog makes some BS claim then the undercurrent v that BS builds on social media and alt media until it reaches a point it can’t be ignored by media because people are already aware from other sources. Then the media reluctantly issue weasel word reporting and tepid fact check to correct the record. By this time the average person has moved on so it limits the fall out.

In this example it was in real time, no long delay. The major media players then had to cover the conflict between an obvious falsehood and the community fact check on Twitter or sink deeper into the arms of the d/prog. Now, where there is nuance or complication to provide cover the media would have held out longer but here there was a black and white call and they didn’t have any way to justify not covering it or from applying their own fact check without losing more credibility.

We shouldn’t underestimate how much of an impact Twitter moving towards a neutral position is going to have.

Nice analysis. Twitter was the machinery for setting the insta-conversation in the virtual public square, and capturing the first couple news cycles around any event.

Even the useful idiot hordes migrating away from The Twit, drags in the place of platforms for setting the conversation. You gotta watch Bug Jack Baron, or you’ll be unprepared for the talking-query of the day.

Thanks. I rate the chance of d/prog actually leaving Twitter anytime soon as about the same as their threats to move to Canada. The adulation, recognition they get along with the utility of Twitter to communicate to a broad audience is too much to leave.

Every empty threat, like to leave, decreases the value of their next tantrum.

Not everyone remembers. Some prefer to believe anyway. But some remember, come to understand, and act accordingly.

FYI – Biden Inflation is going to empty the Social Security Trust Fund. And, when it is empty, and the system hits Pay as You Go, everyone takes a 20% Cut In Their Check.

This 20% cuts is grandfathered into the Original 1930’s Social Security Act. It happens automatically.

If the system is not modified by extending the retirement age, everyone will take that 20% cut.

No worries, the government has nice little retirement communities to move us into in lieu of ss payments. They will even feed us, oh joy!

Come on guys, He’s just reading it like it says on the teleprompter.

Emboldened by the “air cover” they are always guaranteed from the presstitutes, Democrats invariably indulge in larger and larger “hits” of outright prevarication until they eventually croak themselves.

Remember to vote on November 8 — “OD Day” for America.

I can’t wait for the Democrats Propaganda Ministry to toss him, good chance a total Red Wave could be the tipping point.

“ And on my watch, for the first time in 10 years, seniors are getting an increase in their Social Security checks,” he said. “So, checks are going to be up and Medicare payments are going to be down.”

The only reason for the reduction in 2023 Part B premiums is because of the huge overcharging that occurred all this year, which the administration knew about back in April:

“About half of the larger-than-expected 2022 premium increase, set last fall, was attributed to the potential cost of covering Aduhelm — a drug that battles Alzheimer’s disease — despite actuaries not yet knowing the particulars of how it would be covered because Medicare officials were still determining that. By law, CMS is required to set each year’s Part B premium at 25% of the estimated costs that will be incurred by that part of the program. So in its calculation for 2022, the agency had to account for the possibility of broadly covering Aduhelm.

Things have changed, however.

Several weeks ago, CMS officials announced that the program will only cover Aduhelm for beneficiaries who receive it as part of a clinical trial. Additionally, the per-patient price tag that actuaries had used in their calculation last year was cut in half, effective Jan. 1, by manufacturer Biogen — to $28,000 annually from $56,000.

The deleted tweet is actually truthful. Biden’s “leadership” has contributed greatly to inflation, which resulted in the COLA.

The vile and mendacious Dumb-o-crats are spewing a lot of these brazen prevarications, lately. They’re also claiming that crime is allegedly down, a brazen and dishonest use of statistical omission. In some areas, the crime rate may technically be down, because Dumb-o-crat prosecutors aren’t charging arrestees.