Police Seek Tips From Public in University of Idaho Murders

Police Seek Tips From Public in University of Idaho Murders

“This in a way, took our innocence.” 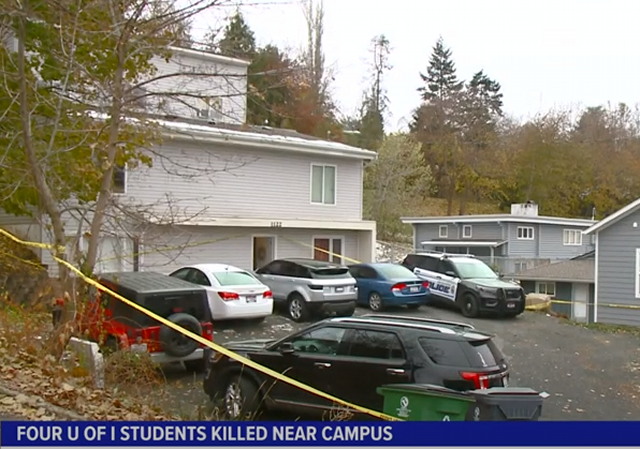 This is such a horrific case. Hopefully, the police will catch a break soon.

No tip is too small, police say as they investigate Idaho student killings and vow to increase presence after holiday break

Police in Idaho will be working through the Thanksgiving holiday on their investigation into the killings of four University of Idaho students that has yet to reveal a suspect or a murder weapon, according to officials.

Four students – Ethan Chapin, 20; Kaylee Goncalves, 21; Xana Kernodle, 20; and Madison Mogen, 21 – were found stabbed to death in a home on November 13 in a grisly crime scene that police continue to comb over.

The town of Moscow, which houses the University of Idaho’s main campus, has not faced a murder since 2015, and residents and students have been deeply affected by the brutal killings.

Some students left town early ahead of the holiday break and professors canceled classes last week over increasing concerns from the lack of a suspect or suspects being identified. The size of the university’s security force has also been increased, according to school officials, and faculty have been asked to prepare remote learning options.

Despite initial reassurances that the public was not at risk, police have since clarified that any ongoing threats to the community cannot be ruled out and have asked those in the area to remain vigilant for the safety of themselves and others.

“Maybe we’ve should, as a community, have always been doing that,” Moscow Police Capt. Roger Lanier said Wednesday at a news conference. “This in a way, took our innocence.”