Another flip for the GOP. 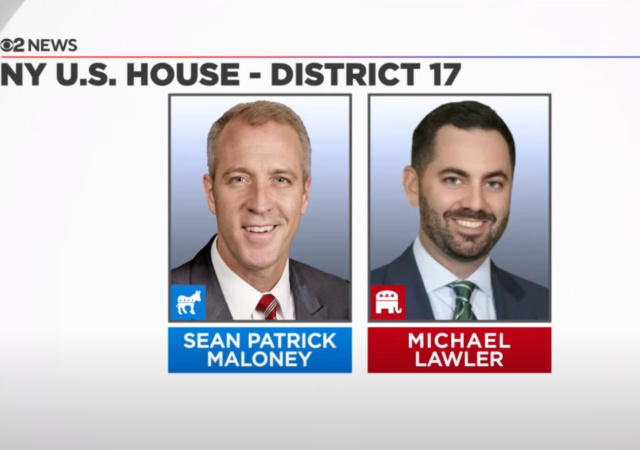 After New York redistricted the state, Maloney tried to run in a new district, considered “a slightly more Democratic area.” He represented the 18th district for over a decade:

Mr. Maloney survived a primary challenge, but had been scrambling to adapt to the contours of a new district. And as the general election race progressed this fall, Mr. Maloney’s fortunes seemed to falter, leading to the very committee he leads pouring hundreds of thousands of dollars into campaign ads in the closing weeks.

It did not work, as Mr. Lawler rode a wave of discontent and traditional midterm strength by the party out of the White House into a major win. The race in the 17th District was one of three in the Hudson Valley region that were considered competitive, despite New York being a deeply liberal state where registered Democrats outnumber Republicans by more than two to one.

Republican congressional leaders in New York, including Representative Elise Stefanik, the third-ranking Republican in the House, have been pushing the state party to the right, embracing some of the policies and rhetoric of former President Donald J. Trump.

Lawler concentrated on the economy and crime while maininting a “moderate campaign.” He distanced himself away from Trump, too.

and fully enjoy the salt from said product as well!

Zeldin running as well as he did helped pull some folks across down ballot by increasing turnout. Running a competitive candidate in Gov and Senate races makes a difference down ballot.

Lock it in, and mock it in.

This is a game of inches. Keep what you got, and take the next one.

When R candidates won races, but the D campaign chair got flipped, it wasn’t the party campaign apparatus doing it.

To bad the governor survived the election.