Something is rotten in the Garden State – especially in its schools. 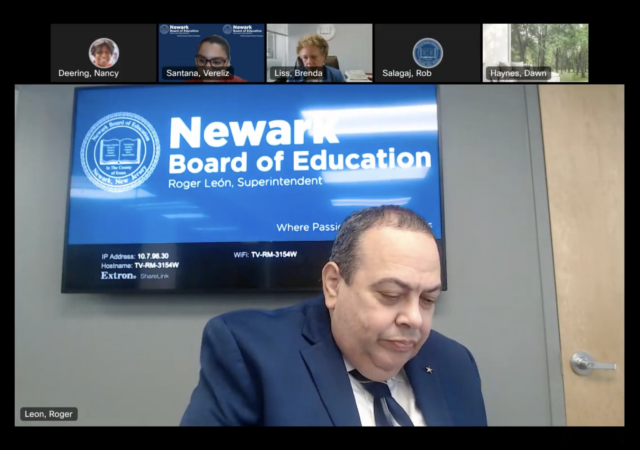 Something is rotten in the Garden State – especially in its schools. In the last three years, school board members or the school board itself in three separate school districts have openly expressed anti-Semitic beliefs, abused their positions to preach hatred of Israel, or adopted curricular material designed to indoctrinate children to hate Israel. Meanwhile, anti-Semitic assaults and other expressions of anti-Jewish hate have shot up in New Jersey.

The Board of Education of Newark, New Jersey, recently added an anti-Israel book to its mandatory curriculum. The book, A Little Piece Of Ground, by Elizabeth Laird with Sonia Nimr, was added to the sixth-grade curriculum for the 2022-23 school year. As described by Barnes & Noble:

Written by Elizabeth Laird, one of Great Britain’s best-known young adult authors, A Little Piece Of Ground explores the human cost of the occupation of Palestinian lands through the eyes of a young boy.

Twelve-year-old Karim Aboudi and his family are trapped in their Ramallah home by a strict curfew. In response to a Palestinian suicide bombing, the Israeli military subjects the West Bank town to a virtual siege. Meanwhile, Karim, trapped at home with his teenage brother and fearful parents, longs to play football with his friends.

Boy playing soccer – good! Mean Israelis in tanks – bad! You can get the idea from the book’s cover art: 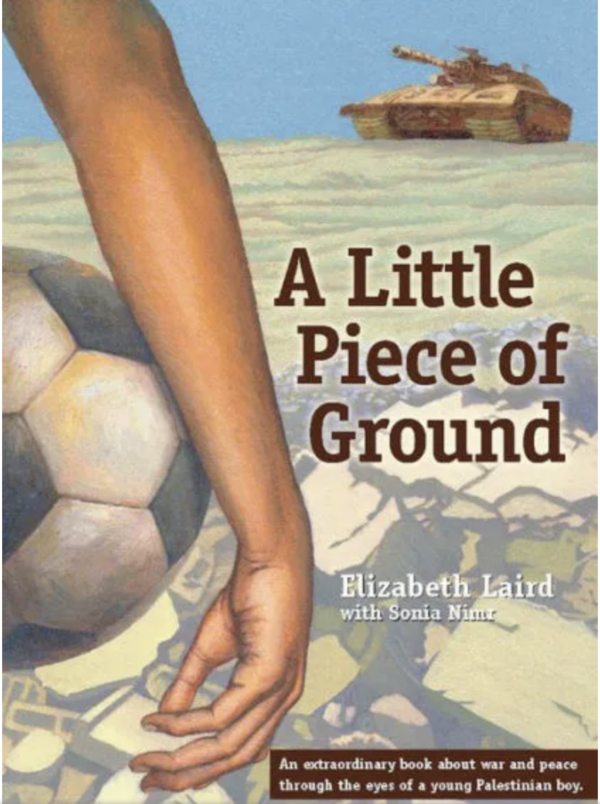 According to a statement the Jewish News Syndicate received from the Zionist Organization of America (specifically, from its National President, Morton Klein, and the Director of its Center for Law and Justice, Susan Tuchman):

The book is filled with misleading anti-Israel statements and outright lies… Instead of building understanding of a complex subject, fighting prejudice and encouraging tolerance, this book will poison impressionable children—with little if any knowledge about the complicated Middle East conflict—to hate Jews, Israelis and the State of Israel.”

On the surface, Laird’s book is a story about Karim, a Palestinian Arab child living in Ramallah, a city located in what is commonly referred to as the West Bank. Readers see the world through Karim’s eyes and experiences. But Laird is clever, repeatedly sending the false and outrageous message to her young readers that Israelis are heartless and cruel, that their goal is to humiliate Palestinian Arabs and make their lives a misery and that Jews are stealing other people’s land.

The ZOA letter quoted several problematic characterizations and passages from the book. For example, the book describes Israelis as “the enemy,” “occupiers” and “animals.” Problematic passages include: “[T]he Israelis won’t be happy until they’ve driven us all out and grabbed every inch of Palestine for themselves,” and that Israeli soldiers are “playing with us. They’re the cats and we’re the mice.”

The school district’s response to questions about the decision to add the book was, if anything, more worrisome than the book itself. Newark Board of Education’s Acting Director of Communications Nancy J. Deering said that the move is “in alignment with New Jersey Student Learning Standards,” and that the district’s plan calls for a curriculum that “elevates historically marginalized voices, strengthens and sustains a focus on the instructional core and provides opportunities to learn about perspectives beyond one’s own scope.”

LIF reached out to Ms. Deering and asked whether Newark’s mandatory curriculum includes any content providing an Israeli perspective. Deering did not respond to LIF’s efforts to reach her.

Sadly, this incident comes as anti-Semitism has been increasing in New Jersey. Sometimes the anti-Semitism presents as anti-Israelism, sometimes not. Both forms have been openly expressed by fairly prominent individuals within or close to the New Jersey school system.

For example, in May 2021, Clifton Board of Education commissioners Feras Awwad and Fahim Abedrabbo exploited their positions to engage in vitriolic speech against Israel while on a school board meeting conducted over Zoom. This was during Israel’s response to rocket attacks against its civilians in Jerusalem and elsewhere. Abedrabbo (who heads the board’s Diversity and Equity Committee) and Awwad accused Israel of apartheid, colonialism, and of training American police to oppress black people (a scurrilous calumny dubbed “deadly exchange”).

A former member of the Englewood Board of Education filed an ethics complaint against the Clifton School board, Passaic County, and Awwad and Abedrabbo, but it was dismissed. The complainant filed an appeal, which is pending before the New Jersey Superior Court, Appellate Division.

Instead of offering sympathy or condolences following the attack, Jersey City school board member Joan Terrell-Paige took the opportunity to condemn “brutes of the jewish community” in a Facebook post. Paige’s post also questioned whether the attackers may have had “a message” to send. Rather than being universally condemned, Terrell-Paige found support from community residents and from Congressional candidate John Flora. She neither resigned nor was forced out of her position, retiring at the end of 2021 with flowers and tributes.

There have been some prominent attacks this year, too. For example, on April 8, 2022, New Jersey resident Dion Marsh allegedly assaulted four visibly self-identified Jews, three of them with a car. He also stabbed one of the three with a knife.

Another person threatened violence against New Jersey synagogues earlier this month, according to FBI reports. An 18-year old New Jersey man, Omar Alkattoul, was arrested on November 10 and charged with sharing on social media “a manifesto containing threats to attack a synagogue and Jewish people.” According to the complaint, Alkattoul’s manifesto expressed anti-Semitic beliefs and asserted that the author acted on behalf of ISIS. Facebook had an account in the name of Omar Alkattoul, which is currently unavailable. A wiki page on historica.fandom.com has a picture of someone who may or may not be Alkattoul. The defendant is a senior in New Jersey’s Sayreville High School.

The FBI has received credible information of a broad threat to synagogues in NJ. We ask at this time that you take all security precautions to protect your community and facility. We will share more information as soon as we can. Stay alert. In case of emergency call police. pic.twitter.com/e64XSmQvNc

How many sixth-grade Newark students read well enough to be affected by the book?

You’re in ten percent territory now. But U kin B shure the rest cun text da hell outta an iphone.

I think you missed the point. This is how bigotry and hate start. What do you think it was like in grade school in Germany in the 1930s?

For the most part, so called Palestinians are just the lowest of the low Arabs. They are dredges of humanity. What is so sad about this is it is self inflicted, a collective irrational psychoses. They intentionally indoctrinate their children, ensuring that they will pretty much live useless lives. For the most part, they are justly and universally scorned, including by most other Arabs.

However, your point is quite valid and not well known.

What everyone overlooks is that after the 1948 war and the 1967 war, the arabs blocked the palenstians from migrating out of israel/palestine to a large degree due to the racism of their arab countries, Jordan and Egypt in particular – simply because the other arab countries did not like the palestians.

The Gasa strip shares a border with egypt which is blockaded – for a reason.

I do not think that other Arab countries are racist when it comes to these people, They understand that the group is collectively trouble, that they are lazy, stupid and warped beyond redemption. They do not change for the better because they murder anyone advocates for change.

Liberal Playbook: Never take blam e when you can blame others and there are always others to blame.

Newark Public Schools have long been a hot mess. Low achievement, low graduation rates, high dropouts and all of the other bad indicators. I worked admissions at a couple of colleges in NJ and while we saw someone who graduated out of Newark as having good survival skills and maybe some grit, we also knew instinctively they needed heavy remediation.
Bill Gates and Oprah Winfrey and one other billionaire (forgetting who) dumped millions into the system for new science instruments and computers, many of which were stolen out of the box. The NJEA made sure that the union got a heavy cut of the action. These financial gifts didn’t move the needle on test scores or grad rates one iota.
They spend about $18k per student in Newark and get almost zero ROI (US average is $15k per student). It’s very sad and such a waste of human potential. But Newark is the intersection of more social pathologies than I can count, and this is just one of them.
But, hey, they can get out the pro-Palestine propaganda. Who needs English and maths?

So, on the upside, since this is Newark Public Schools, few if any of the students will pay attention. They’ll blow off the assignment, or drop out, or let it go in one ear and out the other because they need to get back to the weed, the video gaming, the streets.
Wow, I’m jaded and cynical today.

So, this is worse than anything Kyrie Irving did, yes?

Much like “Police are hunting down unarmed black men” is a cruel and destructive fairy tale, too.