Another possible pickup for the Republicans. 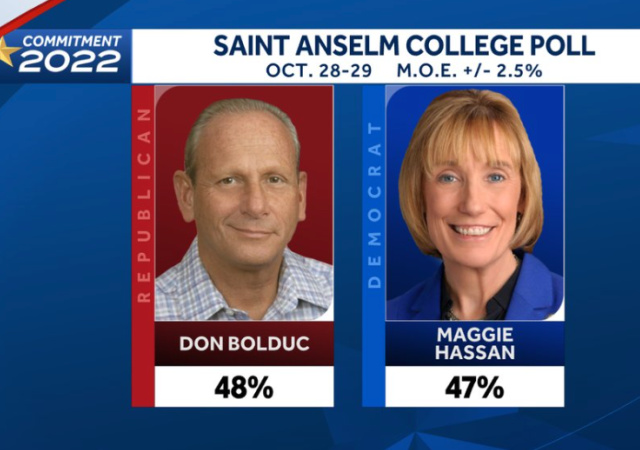 The numbers are interesting. Those who pay the most attention to the election prefer Bolduc over Hassan, 51% to 45%.

Hassan takes those who pay little attention to the election, 63% to 31%.

Hassan and Buldoc are tied with the undeclared party registration voters, 45% to 45%.

Bolduc dominates Hassan with those swing voters in the party identification column, 50% to 31%. However, 12% of those people are unsure. 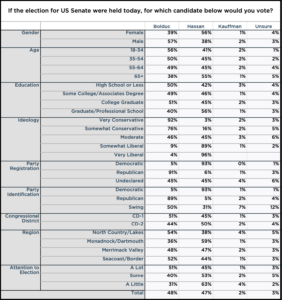 He screwed Blake Masters in AZ as well, and those are the ones we know about.

McConnell may just find himself short on backers when leadership voting time comes (I Hope).

I think that is a timely idea.

It’s possible that McConnell doesn’t get the nod as leader. That’s a tough ask though. More likely would be a core of eight to ten r Senators who actually believe in Tea Party/MAGA/Populist Right policies with another twenty five or so who decide to lean into those policies to avoid being roasted back home.

So not quite business as usual but not revolutionary either. Basically an end to show votes other than to embarrass d/prog in purple States and to force Biden to veto legislation that would be politically popular with most of the public.

I think that if Murkowski loses then McConnell will NOT be leader again.

The RINO core that always votes with the Democrats to screw us over is only about 15 strong, and at the end of the day, they are more concerned with their own political careers than McConnell’s. Their support of him in the past has been mainly because he kept them from facing any actual conservative primary challengers. That time is at an end – he cannot STOP the primary challengers, and they don’t care if they get funding from him and Romney’s niece or not, a huge amount of conservatives have woken up to the scam of donating to the GOP itself and are now giving to the candidates.

If Murkowski loses then I think you will see all the RINOs jump ship on McConnell because continuing to support him may very well cost them their own seats.

16-17 Senate seats will be running for re-election in 2024 and the momentum is with MAGA. I think the chances of McConnell running may be a toss up. If his running creates a deep divide, he just announce he is not running for re-election and step down. Or maybe there would be enough senators fearing their own seats to persuade him not to run.

A lot of his supporters will be retiring as it is so his days are numbered and his influence waning fast. And the way he wasted money this time around in an effort to defeat the MAGA senators who won anyway can’t be comforting to those who will be “going along to get along” with what may very be a MAGA majority of younger senators. Thune, Cornyn, Graham, and their ilk will be gone soon too. Time to go Turtle.

Cornyn is the heir apparent to McConnell’s role as leader of the bloc of establishment Senators that McConnell has cultivated. Just like McConnell, he’s an incumbent Senator from a red State who is personally far less ‘conservative’ than his electorate. He’s been groomed for the role.

This year will see several more Senators elected who are less establishment and more populist right. It won’t be enough, IMO, to push McConnell out as Majority leaders. It will be enough to shift his behavior towards adoption of some populist right policies.

2024 the d/prog are defending a much larger number of Senate seats, many in red and purple States. That’s where the real action is. Bring in another 8 or so populist right Senators to add to the total in 2024 and folks like Cotton and Paul have a role in setting the agenda.

The very last thing McConnell wants is a Republican majority Senate that has a large enough core of Restorationists that he cannot yield easily to the Left,.

FiveThirtyEight estimated Republicans are favored to take back the Senate with 51 seats. The pollster appears to have shifted the Nevada race in favor of Republicans.

As race after race hits the wire with the same news, I get the same feeling I got when lie after lie fell after the heyday of COVID — that all of these truths were there long ago, but were being insidiously suppressed by the opinion-makers until they became too obvious to gaslight around.

You may be right. At the same time I don’t want to get my hopes up! But I have that feeling you have, too.

Hmm, with a week to go, things are looking more and more interesting.

Yet, the NYT said the Dems are leading , Oz is down by 4 to the Adams family look alike,

I think there is going to be HIGE cheating, I’m disgusted already

Volunteer time as a poll watcher or election monitor in your County or Precinct to deter shenanigans.

In the last decade or so, the pollsters have gotten real right near the end to protect their reputations, such as they are. Thus, now we see the real numbers starting to appear. Real Clear Politics has moved to R+4 in the Senate. I think if the R wins NH, then the R will win CO.

Also looking like the R just might pull it off here in WA State where I live, and OR is getting ready to elect a R governor for the first time in 40 years because of mass reaction against the shitshow in Portland. I’ll see it when I believe it, but it just might happen.

If the Rs get NH, CO, WA State senate and OR gov., they’ll be +50 in the House. That’s if the usual suspects don’t steal it. If the red wave comes in, watch the Ds blame it on racist Latinxes (is that the plural) who think they’re white.

I think NH is now a likely GOP pickup and hope that WA is as well. I don’t know about the CO candidate for Senate. I went to his campaign web site and the only thing that struck out as positive was he says he is for economic growth. The highlights of his positions are a promise to campaign against Trump and to introduce an amnesty bill for illegal aliens.

Not sure that he would be much help to the nation if elected but he may be better than the incumbent but that page made him seem much like a Romney or Cheney.

If he wins hope I am wrong.

Senator McConnell has many faults, as all of us have. At least those of us who are honest.

However, while all the Democrats and Left-wingers were rabidly attacking Trump for four years on false charges of Russian collusion, McConnell, working quietly and behind the scenes, with Trump and the Heritage Foundation’s support, changed the federal judiciary for the next 30 years by getting an incredible number of conservative Judges confirmed.

I have to ask you this question. What have you ever done in your entire life that has changed the course of American history to such an important degree?

If it wasn’t for some of the work I did to change America, you’d have no blogs to post comments to.

Pray tell, please let me know what you have done. All I have ever heard from you on the entire Internet is you posting comments.

My reply below was to you, I’d love to know your accomplishments in changing American history.

I’m one of the people who gave you an Internet to read my comments on.

Sorry. I didn’t know that you were Al Gore posting as henrybowman.

Unlike that liar Gore, I actually was one of the ones who did the work.
ARPAnet host #6, baby.

“Senator McConnell has many faults…”
The only thing you got right. McConnell does nothing but advance McConnell.

Remember when the R’s held the house, the senate and the presidency? It was just a few years ago, between 1016-2018. What did McConnell do? You don’t remember do you? Because he didn’t do anything worthwhile.

He kept the senate in session 24 hours a day, 365 days a year to keep Trump from making a recess appointment.

McConnell is owned by the chinese, sames as biden.

Is this Cocaine Mitch under an alias? What have you done yourself, Mr. History Changer Who Doesn’t Comment On Blogs Except When I Do?

I worked for a member of Congress, allegedly on our side. He didn’t fight except to advance his own career. This is default behavior in DC. None of them watch over America the way you pretend they do. Not a single one. I don’t care who you think is the most awesome person in Congress is. They care about themselves first. If America happens to benefit along with their advancement, so be it. Some may pull America in the right direction more than others, but none of them do it out of patriotic altruism alone.

McConnell has worked against people who seem (key word) to want to change how things are done at the federal level. Yeah, he was good with the judicial appointments. But instead of getting a big gold star sticker for going above and beyond, that sort of thing should be SOP for our side. It should be the bare minimum of what gets done every single time a (R) president is in office, not an anomaly that stands in contrast to the rest of this idiot’s damage.

By the way, McConnell was only able to send through so many judges because we had a president who was committed to the overhaul first. Does he have this same kind of track record elsewhere? McConnell lied about destroying Obamacare, he is too cozy with China, he thinks there was an insurrection on Jan. 6, he coddled Liz Cheney and Adam Kinzinger, he hated the tea party movement, he works against candidates in his own party because he knows they threaten his grip on it, he was silent on the raid on Trump’s house until forced to vomit up a useless statement, he does nothing about the border unless it’s Ukraine’s border. This is just off the top of my head. This jerk needs to be overthrown next year.

Nailed it. I would add that it is a false to assume McConnell was the only guy who would have gotten the Supreme Court and judiciary appointments. He was Senate Majority Leader. That was his job. Had a more conservative and less corrupt senator been SML, it’s not possible that they would have done the same or better on that issue alone? The only thing amazing about Cocaine Turtle is despite being so unpopular among his own party members, he managed to hold on to his power. Worth closer inspection.