Nancy Pelosi Claims Democrats Have “Always Been” Unifying The Country

Nancy Pelosi Claims Democrats Have “Always Been” Unifying The Country

“We have always been taking that step because we honor our oath to protect and defend the Constitution of the United States, and that should be a unifying principle for us.” 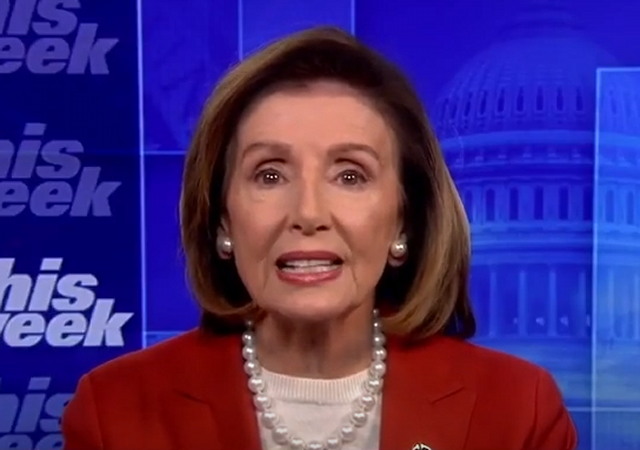 Nancy Pelosi recently appeared on ABC’s ‘This Week’ with George Stephanopoulos and claimed that Democrats have “always been” unifying the country.

OK, Nancy. Whatever you say.

In this episode of Democrats Say the Darnedest Things…

We’ve long known that soon-to-be-erstwhile Speaker Nancy Pelosi has been among the most brazen and shameless political hacks on Capitol Hill for decades. But now, a bit of reality seems to be seeping into her delusional head [sarc]. As a result, Pelosi appears to be considering stand-up comedy as her next gig.

Following a question on Sunday by ABC’s George Stephanopoulos about what post-midterms steps the Democrats should take to help bring the country together, Pelosi busted out a comedy routine:

We have always been taking that step because we honor our oath to protect and defend the Constitution of the United States, and that should be a unifying principle for us. Uh, with many of our bills we worked very hard to make ‘bipartisan, bipartisan, bipartisan,’ and while the bills were bipartisan, the votes were not.

Descriptors like “delusional” are overused in hyperbolic fashion, but what else can you call that?

Pelosi must have missed Joe Biden’s anti-MAGA speech in September.

It was so unifying.

"MAGA Republicans…embrace anger. They thrive on chaos. They live not in the light of truth but in the shadow of lies." pic.twitter.com/6N8QyIG0qX

How about the time in April that the DNC chair called Republicans fascists? Was that unifying?

This is just more gaslighting.

Pelosi knows what members of her party have said, but she also knows she’s not going to get challenged by former Bill Clinton staffer George Stephanopoulos.

Pelosi thinks the Botox is working too…or that her husband was actually assaulted….

She’s proud of the fact that Never Trumpers prefer her to Trump.

She speaks like a true command and control freak.

That’s because she has command and control over half of the plastic surgeons in this country.

But one fewer hairdresser.

Okay, Nancy…why not add a little dance routine to your comedy act? I suggest you perform it to “U Can’t Touch This” by MC Hammer.

In fairness the d/prog do tend to stay united. They duke it out and then support the nominee. They, at least, understand that winning elections is the only priority that matters. When you don’t achieve political power your policy preferences don’t get enacted.

They also pretty much only elect people who will vote in total lock step. Every now and again one strays, but it isn’t that often.

Communism only works when people are drones. The inverse of that is that drones are drawn to it. When you boil it all down, communism is really nothing but feudal monarchy except the monarchs dress in commoner drag in public and deny it.

You have to form a bloc or coalition to get things done. Going Maverick a la John McCain (which he wasn’t) but what Trump seems to be trying to do doesn’t work.

Trump has served his purpose, but he serves no one but himself by trying to split the conservative half of the country into factions.

You have to form a bloc or coalition to force other people to do what you want.
Conversely, a good example of a person who “gets things done” is Elon Musk.
He didn’t have to form squat… just chose to form a bunch of companies, which HE runs, not some coalition (as the woke whiners at Twitter learned too late).
And we have a choice to deal with him or not, there is no force.

Their secret: they spread the corruption money around. Unlike the GOPe, which hogs it for themselves:

Amen, nothing to be proud of staying United for that crap

Did they just change the definition of “unifying”, like they did for “recession”?

She means the parasite class, not the population.

Wrapping yourself in the flag is the last refuge of a scoundrel.
She reminds me of the Nazi that had to dig the graves of the GIs he killed, singing Yankee Doodle Dandy and saying “Fuck Hitler” in Saving Private Ryan.

Beat me to it.. I was just going to say “Nanshee who?”

To her it means we do what I want and you get nothing.

Hey, you missed the other big joke:

Like banning guns, allowing sustained invasions, giving EOs the force of law, and demanding that DC become the 51st state — protection like that.

Maybe I need to visit a skankier class of pornsites… I didn’t even know women COULD p* down your back and tell you it’s raining.

A world-class malignant parasite and embezzler.

Ummm, so botox does cause brain damage.. 😁

If Nancy sued botox, botox’s defense would be to show that she already had pre-existing brain damage.

Her counter argument would be, “Yeah, but look at what botox did to Joe Biden. I rest my case.”

The only thing the democrats unify is the communists trying to destroy the country.

Bosh. There isn’t one part of the Constitution that Nancy and her crew honors. If they had their way the Bill of Rights would be tossed entirely.

Don’t forget her main reason to breathe: steal money for herself and her hammer-fetished husband.

I remember when the Speaker tore up her copy of President Trump’s State of the Union Address. I did not understand that as a show of unity.

Well Joseph notes that La Pelosi the Wicked Witch of The West tore up Trumps SOTU address. I remember Pelosi smirking and carrying a big gavel strolling from a Congressional office building (trailed by a dozen of so Dim Congressmen) to go into the Capitol and gavel Obamacare into existence.

…..So long as you agree with them.

Nancy is full of dung.

What a repulsive, disgusting imbecilic old hag. One of the most despicable creatures ever to grift her way to power and fortune. Shuffle off, you worthless old crone.

— Unifying by finding common ground is one thing.

— Unifying by convincing and enlisting others is another.

— Unifying by driving out the wrongthinkers polluting the country’s precious bodily fluids is something quite different.

I think she spelled “volk” wrong: a collection which, by definition, if you don’t agree, you’re not in. So sloppy of her. If you’re gonna craft the grand unity, you gotta use the same terms, the one true way, every time.

As we say down south. She’s as full of crap as a Christmas Goose. Go have another drink Nancy. Get lost first chance you get, too.

Nancy Pelosi is one of the best unifiers of the Republican Party.
She is better at it that Donald Trump, Mitch McConnell, McCarthy or Cruz.

“Nancy Pelosi Claims Democrats Have “Always Been” Unifying The Country”
Eastasia, Eurasia, who the hell can keep track.