“I’m going to skin Darren Bailey alive, making sure he is still alive, and I’m going to feed his f——— family to him as he is alive and screaming in f——— pain.” 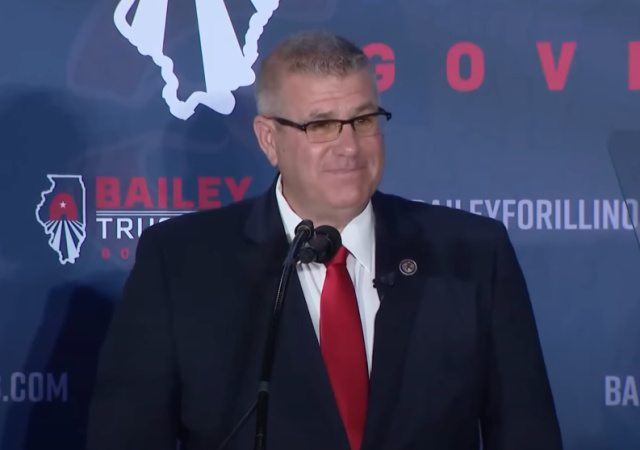 Will we see the mainstream media condemn this man? What say you, Hillary Clinton?

He faces “one felony count each of threatening a public official, telephone harassment and harassment by electronic communications, according to the Cook County State’s Attorney’s office.”

And yet the court gave Lennox $75,000 bail, electronic monitoring, and told not to contact Bailey or anyone associated with him.

A political ad set off Lennox. From The Chicago Sun-Times:

The voicemail in question followed a fight Lennox had at a Chicago bar after a political ad appeared on the bar’s television. The ad — and repeated ads he had seen during the campaign — made Lennox “angry,” prosecutors said, and a “heated argument” began between Lennox and his friends, leading him to send a voicemail to Bailey’s Springfield office, prosecutors said.

“I’m going to skin Darren Bailey alive, making sure he is still alive, and I’m going to feed his f——— family to him as he is alive and screaming in f——— pain,” prosecutors say Lennox said in the voicemail. He also made statements about abortion in his message.

He further said, “He is a piece of white a— racist s—-, and honestly if he doesn’t kill himself, I will. You know what? I know where he lives. I know where he sleeps. I know where his kids sleep. And I know the f——— school he works at,” prosecutors allege he said. Lennox also said “the candidate teaching all this mother f——— misinformation is going to die. So honestly he should just kill himself before anything else happens.”

The police said Lennox left the voicemail on October 28. The Illinois Secretary of State Police didn’t believe he was “a credible threat.” But the Illinois State Police investigated, forcing the hands of the Chicago Police to move in on Lennox:

In an interview with Chicago Police, Lennox allowed officers to see a Snapchat message he sent to friends, in one of which he bragged that he was a “political terrorist.” After telling a friend Bailey was on lockdown, he offered up three laughing face emojis, prosecutors said.
To another friend, Lennox wrote, “I feel so f——— accomplished,” Lennox said.

Police said Lennox admitted making the threats. He was arrested at 10 p.m. Monday at his Chicago home.

Bailey has extra security detail after requesting it “from the Clay County Sheriff’s office, as well as Illinois State Police.” Authorities put “schools affiliated with Bailey and his family were also placed on soft lockdown.”

Thanks for the info. Nothing about this on the local news or paper in western Illinois. Always amazing how one sided the the media continues to be.

It’s in the Chicago Tribune:

“I’m going to skin Darren Bailey alive, making sure he is still alive, and I’m going to feed his f——— family to him as he is alive and screaming in f——— pain.”

I’m guessing black and Democrat, mostly because it was never mentioned, but “sentencing” was extremely lenient.

I dunno….the white liberal crazies that think everyone is racist (except them of course) are more common than you think.

This is why you don’t make assumptions:

Bonus points if the voters in Illinois know what’s coming in January when the SAFE-T act goes into effect. There are some not horrible LEO reforms but the elimination of cash bail for a long list of offenses is going to be very bad.

It’s time to arrest Rob Reiner and charge him for inciting violence.

To be honest, I am amazed that Leftist Lennox is being charged in Democrat ruled territory for threatening a Republican candidate. The idea of them arresting and charging Rob Reiner is fantasy.

It’s what he and his ilk wish for you and I.

Other countries may have such leverage, but he can build functionality to both enforce such laws overseas while simultaneously respecting free speech rights here. Pesky Bill of Rights.

Far easier for him to simply block the IP ranges of those countries and tell them to go f*ck themselves. Anyone that really wants in can use a vpn which he has no control over.

Not quite mom and dad’s basement because he lives in a luxury condo building on Lake Shore Drive. More detail from the court appearance. Lovely child. I’m sure his parents are so proud of him. https://cwbchicago.com/2022/11/lakeview-man-threatened-republican-gubernatorial-candidate-prosecutors.html

Drunk dialing: America’s cringiest tradition!
Brandon, Auntie Maxine, and Hillary can be proud of themselves — this terrorism is all on them and their rhetoric.

Is this a typo, or does such a bizarre organization actually exist?

About the Department Secretary of State Police
The Department of Police began service to the citizens of Illinois in 1913, as “Special Representatives” to act as “Automobile and Motorcycle Investigators”. It wasn’t until 1921 that Investigators were authorized compensation. Secretary Louis Emmerson also established a Bureau within the Office of Secretary of State to track stolen motor vehicles and motorcycles.

In 1957, Secretary of State Charles Carpentier created the Illinois Motor Vehicle Law, the forerunner of today’s Illinois Vehicle Code. The Investigators were also designated as Police Officers and Constables vested with the authority to enforce provisions of the Motor Vehicle Law. House Bill 802 also created what was known as the Anti-Theft Laws and vested the Secretary of State with the power to assign new identification numbers to vehicles having their numbers missing.

In 1971, the Division began an extensive Auto Theft Program. During the late 1970’s and into the 1980’s, the Division was actively investigating organized crime in the Chicago and East St. Louis areas. Many cooperative ventures were undertaken with local, state, and federal agencies. These efforts proved to be highly successful.

The 1980’s also saw a dramatic increase in drunken driving arrests by the Department. Federal grant money was used to enhance the Department’s efforts in alcohol related enforcement activity. It was during this period of time that the name was formally changed to the Department of Police. The Department received a new look with exterior light bars on the squad cars and redesigned door emblems.

Throughout the mid 1990’s, the Department sustained its efforts in the regulation of the motor vehicle industry, motor vehicle theft investigations, license and title regulations, security at Secretary of State facilities, as well as the Capitol Complex.

In January of 2005, the General Assembly passed a Supplemental Appropriation establishing a Capitol Police Department within the Secretary of State. This police force is assigned to the nine buildings comprising the State Capitol Complex. Its primary function is to ensure public safety, identify and mitigate threats, detect criminal activity and prevent loss of property within the Capitol Complex.

Tradition, Service, and Dedication
Tradition — is the value by which we maintain our direction. Tradition drives us toward the accomplishment of our other values. Tradition assures our consistency in our everyday operations and service to the people of Illinois.
Service — is the value by which our performance is judged. Service and accountability to each other and the citizens becomes our most basic mission. When we demonstrate respect for human life, compassion and loyalty to our values, we perform to the level of service expected by the citizens we serve.
Dedication — is the value by which we strive to maintain all other values embodied in our state and federal constitution. Dedication to honesty, truthfulness and fairness, demonstrates integrity and results in the trust the people of the state of Illinois have bestowed upon us.

I didn’t even know threatening a conservative was a crime since Obama was president. I know Garland thinks it is not..

If, like me, you are skeptical of the integrity of the 2020 vote count, WaPo and Brandon link you to the attack on Pelosi. Nothing like this scapegoating will happen with Brandon regime supporters.

And things like the WaPo headline are used by the FBI and DoJ to set investigation priorities.

Not a word in most of the Illinois newspapers