It’s tight, and Democrat challenger Mandela Barnes could still squeak out a win. 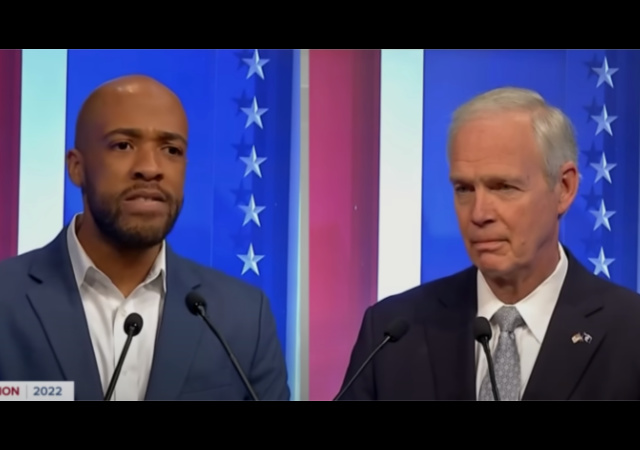 The Cook Political Report changed the Wisconsin Senate race from toss-up to Lean Republican just days before the election on November 8:

We are making one final shift in our ratings — a contest we have admittedly struggled with over the past few months. Wisconsin is moving from the Toss Up column to Lean Republican. We realize this comes as the Marquette University Law School poll showed a tightening of the race, with GOP Sen. Ron Johnson now only up two points over Democratic Lt. Gov. Mandela Barnes — down from a six-point lead last month. However, the national climate gives the incumbent the slightest of edges, while Republicans have pummeled Barnes on crime. Many national Democratic strategists we talked to closely watching this race concede those attacks have worked, and aren’t optimistic given the worsening political environment. Johnson started the cycle out underwater, but the Marquette survey shows him more even among favorables, with -3 compared to -4 for Barnes. Johnson is also winning independents by 7 points.

Democrats say they are enthused by early turnout numbers for Barnes, but heavy turnout on Election Day from Republicans could erase that. The Marquette survey showed Johnson at 50, and other surveys have shown him close to that number. Republican private polls have Johnson with a slightly larger lead but still close for such an evenly divided state. Nevertheless, we ultimately believe this contest needed to be in a separate column from our other Toss Up races. We give the slightest edge to Johnson, but it does now represent the most winnable race in the Lean R column for Democrats and would be a sign they are poised for a good night if they are able to flip this seat.

The group has the Arizona, Georgia, Nevada, and Pennsylvania races in the toss-up column. If those go to the Republicans, the party would have a 53-47 majority.

They still have the New Hampshire race “Lean Democratic” but admit the race between incumbent Democrat Sen. Maggie Hasson and GOP candidate Gen. Don Bolduc has become too close:

And there is renewed worry among Democrats about New Hampshire Sen. Maggie Hassan despite the weakness of her challenger, retired Army Brig. Gen. Don Bolduc. Public polls have shown Bolduc consolidating even skeptical Republican voters, and some Democratic polls have shown a similar tightening. This race, where most polls in the state close at 7 p.m. ET, could give us an early look on Election Night whether there is a larger Republican wave. If Hassan is in trouble, it’s hard to see Democrats holding on to other, more endangered incumbents. Nevertheless, we are keeping our rating at Lean Democratic.

The move almost mirrors the latest forecast from RealClearPolitics, which predicts the Republicans will have 54 Senate seats.

RCP forecasts Bolduc to win New Hampshire, a pickup for Republicans along with Nevada and Arizona, and the party keeps Pennsylvania.

Both places predict Georgia will likely go to a December 6 runoff between incumbent Democrat Sen. Raphael Warnock and GOP candidate Herschel Walker. But the Democrats do not have President Donald Trump’s cries about a rigged 2020 election in Georgia, which Cook believes caused a low turnout two years ago:

We have long anticipated that the Georgia Senate race between Democratic Sen. Raphael Warnock and former UGA and NFL football star Herschel Walker will go to a December 6 runoff if neither candidate hits 50 percent. If Democrats flip Pennsylvania and then Republicans win Nevada, it’s deja vu to 2020, and control of the Senate comes down to overtime in the Peach State. That is a scenario that Democrats don’t believe will work in their favor this time again after being saved by then-President Trump’s election denials and efforts to overturn results that depressed turnout two years ago. If Senate control is on the line, Walker could have a slight edge. If it is not, Walker — who has been beset by scandals and domestic violence allegations — may struggle to turn unenthused Republicans back out. However, we also now see a scenario where — driven by potential large margins of Gov. Brian Kemp in his rematch with Stacey Abrams — Walker could win outright if it is an outstanding night for Republicans.

I’m from Wisconsin and I can guarantee that Milwaukee and Madison will be voting with dead people.

It always leaned Republican. The pollsters are trying to save face.

From what I have been able to perceive over the years, which might be wrong, Johnson seems like one of the best citizen statesmen we have, someone who probably had no idea how bad it was until he got there, then decided to roll up his sleeves and get to work
No wonder some would do whatever they can to get rid of him.

Videos of mudslides as they begin to break loose have uncanny similarity to our daily news of the last two weeks.

The gratuitous crap about the Georgia runoff in January 2021—which went Democrats’ way because they kept doing everything they supposedly hadn’t been doing in November 2020—is just one giveaway.

With so many polls showing “leaning Republican” and with every race showing the Republican candidate having the momentum, Angry Grandpa is sure going to have his work cut out for him if he plans on howling “Republicans stole the elections!”

McConnell’s head is spinning as all of those “weak Trump candidates” are heading for a clean sweep. Surrender Mitch!

Ace made an interesting observation about ALL pollsters now changing their calls in favour of Republican because their accuracy is measured on their final polls close to election day and NOT their polls conducted leading up to election day.

And now we are in final poll territory and suddenly all these poll results that have firmly been in Democrat favour for
Months are only now just suddenly ALL changing in favour of Republicans.

I would bet on Johnson with a wave at his back. The independent voters are breaking heavily for r which ie helping fuel the wave.

Cook nearly always seems to fudge one category to the left in every race.

After the last couple of years I am baffled that anyone would vote for people who did it to them.

Spread the field. Every race, every issue, every time.

Spread the field. Every race, every issue, every time.

It’s a burden and a bother to contest the politics every time. We’d rather be living our lives. BUT, when they’ve shown they’ll leave us no room, no part of life our own, we have literally nothing to lose.

Pushing back may buy us a little space to live our lives in.