“In every school, students are REQUIRED by the regime to take part. Regime supporters burn US flags and chant “death to America”.” 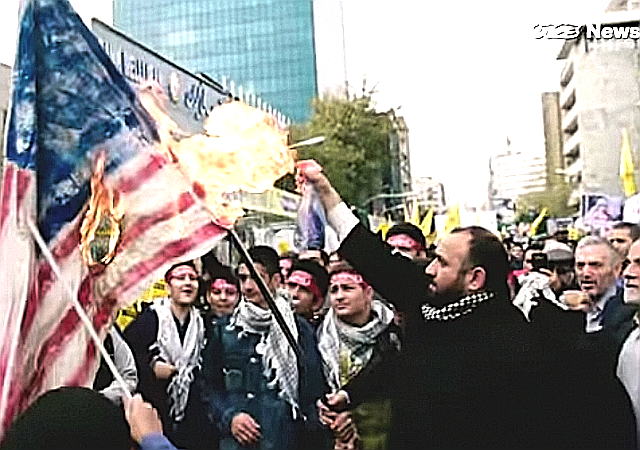 The regime-backed rallies on Friday marked the events on November 4, 1979, when an angry and well-organized Shia-Islamic mob, instigated by their leader Ayatollah Khomeini, broke into the U.S. Embassy in Tehran and held 52 U.S. diplomats hostage for 444 days.

Today in Iran is "Student Day" a regime holiday celebrating the Islamic regime's takeover and hostage taking at the US Embassy in 1979. In every school, students are REQUIRED by the regime to take part. Regime supporters burn US flags and chant "death to America." #iranrevolution pic.twitter.com/rvkmRtjQ5c

Friday’s rallies, which coincided with the weekly Islamic day of prayer, were used to incite hatred towards America and its Western allies.

Demonstrators loyal to the regime, including burqa clad women, screamed “Death to America!” and “Death to Israel!” as they marched in processions, media outlets report. “Participants also played songs which described the US as a manifestation of Satan,” German public broadcaster DW News reported.

Iran on Friday marked the 1979 takeover of the U.S. Embassy in Tehran as its theocracy faces nationwide protests after the September death of a 22-year-old woman who was arrested by the country’s morality police. Meanwhile, activists in southeast Iran claimed security forces killed at least 16 people in protests there.

Iranian state-run television aired live feeds of various commemorations around the country, with some in Tehran waving placards of the triangle-shaped Iranian drones Russia now uses to strike targets in its war on Ukraine. But while crowds in Tehran looked large with chador-wearing women waving the Islamic Republic’s flag, other commemorations in the country appeared smaller, with only a few dozen people taking part.

Those at the commemoration also waved effigies of French President Emmanuel Macron and Saudi Crown Prince Mohammed bin Salman. Signs and chants from the crowd called out: “Death to America! Death to Israel!”

This demonstration of vile hatred towards the U.S. is not an occasional outburst, but a defining feature of the Iranian regime. The weekly Friday prayers in Tehran, often led by the country’s Supreme Leader Ayatollah Khamenei, are ceremonially accompanied by chants of “Death to America.”

While Tehran staged anti-American rallies, protests against the Mullah regime entered their 7th week despite a deadly crackdown by the Islamic Guard (IRGC) and other regime-loyalist militia.

On the anniversary of the US embassy hostage taking in Iran, today the regime called on students to take yo the streets to chant “death to America”.

An estimated 227 people have been killed by regime forces, including 40 minors, an Iranian rights group revealed Thursday.

Thousands of Iranians have so far been arrested for taking part in the protests.  “About 1,000 people in Tehran have been charged in connection with the anti-government protests that have engulfed Iran, the city’s chief prosecutor says,” the BBC reported earlier this week. “Authorities have not said how many have been arrested nationwide, but rights activists have put the total at 14,000.”

The uprising was sparked on September 16, when a 22-year-old woman died in the custody of Iran’s Sharia-enforcing Morality Police. The woman was accused of violating the country’s mandatory Islamic hijab, or headscarf, laws.

Women, particularly young girls, who refuse to wear hijab in the wake of the protests, are in the crosshairs of government forces.

According to media reports this week, a teenage girl in southern Iran was beaten to death by security personnel for allegedly tearing a picture of Khomeini, Iran’s former Ayatollah.

“An Iranian girl in middle school was beaten to death after police officers found a torn-up photo of former Iranian Supreme Leader Ruhollah Khomeini in one of her schoolbooks, local news outlet in the Sistan and Baluchestan Province Haalvsh reported on Sunday night, the Jerusalem Post reported Monday.

Could be said about everyday American schools!

“In every school, students are REQUIRED by the regime to take part. Regime supporters burn US flags and chant “death to America”.”

I thought “death to America” was a Democrat motto…..

Death is an anachronistic hope and label. Abortion is a liberal work of art, socially progressive, and humane by industry standards that oppose transhumane treatment of other classes of murder, rape, therapy, cannibalism, rites, diverse “burdens”, etc.

These Iranian “celebrations” remind me so much of the “spontaneous” celebrations/”peaceful” protests/riots that the Democrat socialists manage to have.

I wonder if they still have to pay the “protesters” or if they are sufficiently brainwashed to just go out on orders. The media seems to fall into the latter category with the Dem talking points.

The main difference between Iran and America is that, when they celebrate in Iran, the stores do not get looted.

Let’s make peace, give them everything they want, and enforce zero conditions of that peace.

These are the same people still killing women on the street for wearing the wrong hats?

I still think that we should
beat Iran thoroughly, followed by drones with machine vision looking for those fancy rag heads and terminating them.

Well, they do seem quick to sell killer drones to Russia of use in Ukraine….maybe a taste of their own medicine might be in order.

A day of state sponsored Islamic rage. Which differs not one bit from every other day.

Perhaps the U.S. Gov’t would be smarter suppling arms to Iran rather than the Ukraine