“The structure was set ablaze as protesters celebrated a symbolic victory over the Iran’s regime.” 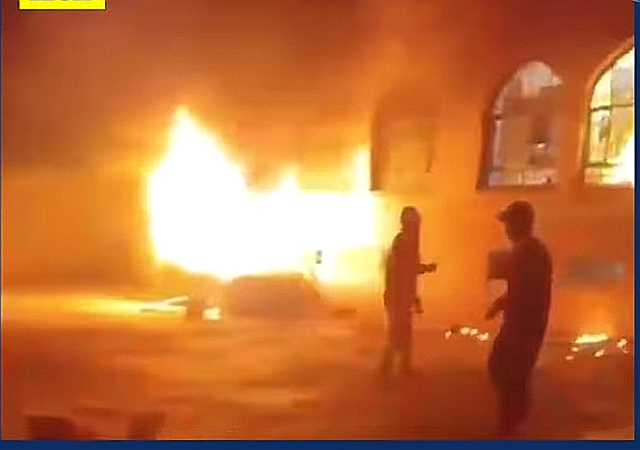 Days after Iran sentenced anti-regime protestors to death in a bid to quell the raging unrest, protests have intensified across the country. On Thursday, protesters set fire to the ancestral home of the Islamic Republic’s founder Ayatollah Khomeini as the anti-regime uprising entered its third month, media reports said.

“The ancestral home of Ayatollah Ruhollah Khomeini that has functioned as a museum to the late Supreme Leader was set on fire by anti-regime protesters who continued their nearly two months of defiance against the hardline rule of Iran’s theocratic rulers,” the German public broadcaster Deutsche Welle reported.

“The structure was set ablaze as protesters celebrated a symbolic victory over the Iran’s regime,” the broadcaster noted.

While the Iranian authorities tried to cover up the incident, the French news agency AFP confirmed the news, reporting, “The house in the city of Khomein in the western Markazi province was shown ablaze late Thursday with crowds of jubilant protesters marching past, according to images posted on social media, verified by AFP.”

The BBC reported the fire at Khomeini’s home:

Protesters in Iran have set fire to the ancestral home of the founder of the Islamic Republic, Ayatollah Ruhollah Khomeini.

Images posted on social media show part of the structure in the city of Khomein being set ablaze. News agencies have verified the videos’ location, but regional authorities denied there had been an arson attack.

Ayatollah Khomeini is said to have been born in the house, which is now a museum that commemorates his life. (…)

Social media videos from Khomein show dozens of people cheering as the fire breaks out. An activist network said the footage was taken on Thursday evening. (…)

The fire at his ancestral house is one of the latest incidents in a wave of nationwide demonstrations directed at his successor, Ayatollah Ali Khamenei, and his government.

Khomeini, who led Iran’s Islamic coup which ousted the country’s monarch Reza Pahlavi in 1979, continues to inspire Shia and Sunni jihadist groups across the world.

Khomeini instigated the 1979 seizure of the U.S. Embassy in Tehran and the subsequent hostage-taking of 52 U.S. diplomats for 444 days. In 1989 — five months before his death, Khomeini issued a death fatwa against author Salman Rushdie for writing a novel deemed insulting to Islam and prophet Mohammad. The 75-year-old writer was stabbed multiple times as he attended a literary festival in New York this August.

Protestors in the city of Khomein have burned down the childhood home of the late Ayatollah Khomeini, founder of the country's current theocracy. The symbolic significance of this move against the most revered figure in the Islamic Republic cannot be overstated.#MahsaAmini pic.twitter.com/vmoJfj3NAX

The burning of Khomeini’s home in central Iran highlights how security forces loyal to the regime are losing control of the streets despite a deadly crackdown. Hundreds of Iranians have been killed and thousands arrested for daring to defy the regime.

“At least 388 people have been killed and more than 16,000 arrested, according to Human Rights Activists in Iran,” The Associated Press reported Friday. “Rights groups accuse security forces of firing live ammunition and bird shot at demonstrators, and of beating them with batons, violence captured in numerous videos circulated online.”

Good. Wonder if the owners had insurance. Mutual of Baghdad?

A symbolic victory fit for a promo.

I assume that the White House will shortly issue a statement offering to pay for the restoration as a gesture of goodwill to the Mullahs.

It was the will of Allah

Wow.
Shit’s gettin’ real.
Wonder if shit will get real over here someday?

Maybe the people of Iran will succeed in in exterminating their oppressors, and in the process save themselves from the wrath of people outside Iran? That would be great if they succeeded.

When you kill enough of them long enough, even “mostly peaceful” protests become less so.