“Prior to the debate, an individual in the crowd gathered outside attempted to punch the General and was quickly apprehended and arrested.” 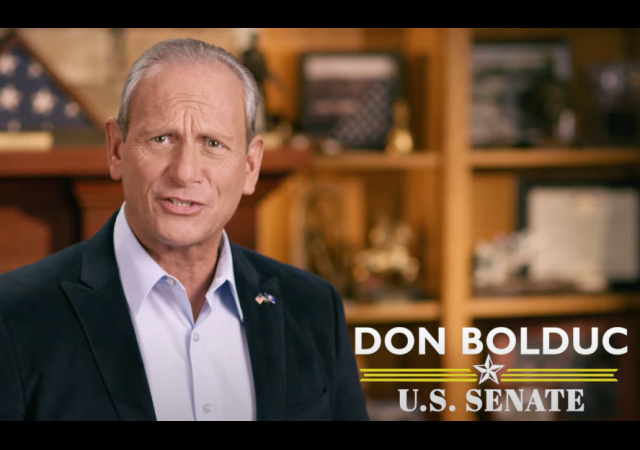 “As the General said on stage tonight, it’s time to lower the temperature of the political discourse in this country. Prior to the debate, an individual in the crowd gathered outside attempted to punch the General and was quickly apprehended and arrested. We are grateful to the quick response from law enforcement on the scene,” said a Bolduc campaign manager.

The Bolduc campaign spokesperson referred further questions to the Goffstown Police Department. Boston 25 contacted the department but were advised to call back Thursday morning.

Bolduc brought up the attack in the debate:

Bolduc referenced the altercation near the end of the debate, when he and Hassan discussed the brutal attack on House Speaker Nancy Pelosi’s husband at their San Francisco home.

The GOP Senate nominee said “it’s a sign of political problems. Republicans and Democrat, that fuel issues with people that get them to the point where they are just so upset at an individual that they strike out at them. Happened to me outside just before I came in. Right. This is wrong and it needs to be stopped.”

Disgusting behavior. We saw this same libertarian party activist get aggressive with our campaign volunteers at this debate and the last. #NHSen #NHPolitics https://t.co/BzaFzpjNsi

Here is the video of "First Amendment Auditor" Joe Hart being arrested for allegedly assaulting @GenDonBolduc before his debate with Maggie Hassan in Manchester tonight. They do this routinely, and it's how they make money on YouTube. https://t.co/vAkI6HETPV @Cernovich

On Wednesday, authorities charged a Chicago man for threatening IL GOP gubernatorial candidate Darren Bailey. Now Bolduc. Yet all we hear about across the MSM is the attack on Paul Pelosi.

Thank goodness Pelosi is going to recover. Violence is never the answer. I just wish the MSM would give equal coverage and outrage on all attacks and threats on politicians.

The New Hampshire senate race is much closer than many thought and could be a significant part of the predicted red wave.

RealClearPolitics gives Hassan a 0.5% average but ranks the race as a toss-up while projecting a GOP pickup.

The Cook Political Report has the race as Likely Democrat.

Violence is never the answer.
You need to speak to Robert Heinlein about this fallacy.

Political violence is a bad idea because it creates a cycle of tit for tat violence or worse an escalation designed to provide a more permanent solution.

That said, properly measured violence in retaliation/response being applied to those who instigated the violence certainly has a place in the range of options. We don’t always need to choose violence bit everyone should always consider that your opponent does have that option.

IOW, as my Father told me ‘don’t let your alligator mouth overload your hummingbird ass’.

That sounds cool but IRL a disproportionate use of force is likely going to land you in jail. My advice is don’t choose violence if it can be avoided. Try and de-escalate but given no alternative then it’s the other guy who chose violence so what follows is on him.

IF a Dem was making this claim, I could safely say they were lying.

If we’re listing examples… the guy who got on stage with Lee Zeldin was wielding a deadly weapon inches away from the candidate at a formal event.

So another “MAGA Republican” attacked another Republican? This is what the media spin will be.

Looks like the assailant is a prog incel who goes around inciting people in order to drive clicks to his Youtube channel.

Too bad the General’s handlers didn’t tune this c*nt up like Chappelle’s did to the man that bum-rushed him on stage a few months ago.

These keyboard warriors need to get a real, physical taste of violence. Then they’ll understand that words are not, and can never be, violence.

I think most will calculate the odds and think, :Well, it happened to him, so it’s less likely to happen to me.” We’ll need to hammer a few of them before they figure out the tide has turned.

Let’s wait until all the facts are in before we describe the assailant as a man. We don’t yet know how Ze identifies.

A core tenet of libertarianism is the zero-aggression principle. So I have to wonder if this guy is a “Libertarian” in the same way that David DePape is a “Q/MAGA Republican?” A libertarian throwing the first punch is like a Muslim breakfasting on Jimmy Dean.

I’m wondering what the aftermath of the election will look like. With every leftist from the President to Hollywood celebrities declaring that if the Democrats don’t win big we’ll become Nazi Germany, I won’t be surprised to see a major chimpout.

Of course the rioting will again be in Blue cities; once again the “progressives” fouling their own nests.

Is anybody keeping a running tally by party affiliation?

It’s tough because the media outright lie about the perps’ politics. Every “right-wing” spree shooter turns out to be either an incoherent socialist or a straight-up mental case, and the effort needed to get past the deliberate smoke every time is not insignificant.