FL Dept. of State Tells DOJ That Federal Election ‘Monitors are Not Permitted Under Florida Law’

FL Dept. of State Tells DOJ That Federal Election ‘Monitors are Not Permitted Under Florida Law’

“the presence of federal law enforcement inside polling places would be counterproductive and could potentially undermine confidence in the election.” 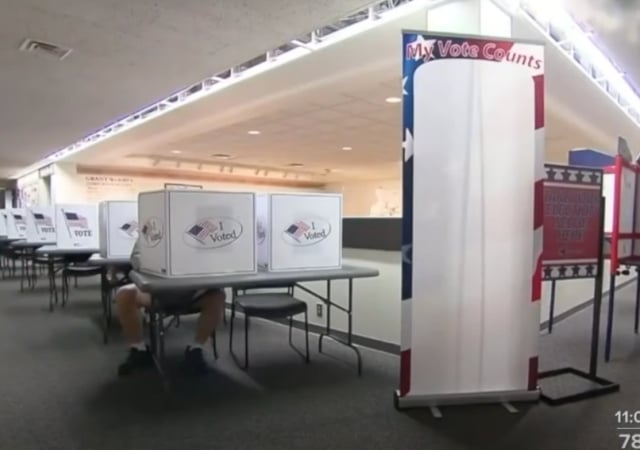 The DOJ announced it would send “monitors” around the country to ensure the election goes smoothly. Yeah, okay.

“Section 102.031(3)(a) of the Florida Statutes lists the people who ‘may enter any polling room or polling place,'” wrote Brad McVay, general counsel at the Florida Department of State. “Department of Justice personnel are not included on the list.”

McVay pointed out that the letters sent by the DOJ did “not detail the need for federal monitors” in the counties targeted by the DOJ.

If the statutes list included DOJ officials, then the DOJ would have to provide specific evidence as to why the monitors needed to enter the polling place.

Without proper evidence, “the presence of federal law enforcement inside polling places would be counterproductive and could potentially undermine confidence in the election.”

The DOJ letter to the counties provided “a non-exhaustive list of federal elections statutes as the basic for this action without pointing to any specific statutory authorization.”

The state asked the DOJ “for specific authorization” but officials did not answer.

McVay told the DOJ it has his phone number. He also assured them that the Florida Department of State will have “its own monitors to the three targeted jurisdictions.”

Florida Department of State to DOJ:

“federal election ‘monitors’ are not permitted inside polling places as it would be counterproductive and could potentially undermine confidence in the election.” pic.twitter.com/I3TdaozUxG

“not detail the need for feral monitors”

Though that implies the existence of domesticated monitors.

Domesticated after a trip to the vet “to get tutored “?

A favorite Far Side scene!

Feral is about the right description.

It is not cool to point out a typo.. but this one is wonderful!!!

I made a living pointing out typos (and poor grammar, wording, etc.) It was cool for me.

Same here, it’s okay to point them out. (especially super funny ones like this)

Point out typos to [email protected]

TheFineReport.com in reply to StillNeedToDrainTheSwamp. | November 8, 2022 at 3:05 pm

Merrick Garland is a very frightening individual. I’d equate him to Heinrich Himmler, and I’m not exaggerating. The only difference at this point is that Garland hasn’t had the opportunity to go the distance that Himmler did.

You mean, swallow cyanide in the bunker?

Himmler didn’t have the unfettered power that Garland does, he was answerable to Hitler.

Garland doesn’t seem answerable to anyone or anything.

Now, I’d like to see Florida arrest any federales they catch, and perp walk them, complete with handcuffs.

Some red Arizona counties have plans to assign sheriff’s deputies to “escort” the DOJ clowns and tell them when and where they have to get off as sheriffs (not feds) are the supreme law in the counties. No luck getting deep blue Penzone to do that in Maricopa.

DOJ says that in order to maintain fair elections they must send monitors to make sure Republicans do not interfere by attempting to watch blue vote counters do their work.

The sad part is that was the case for many decades in effect. The National Republican Party was enjoined from sending monitors and staff by a Fed Judge. The guy kept it place for four decades. It lifted in 2021 when the the guy died and the Judge who inherited the case relented but not until after the 2020 election.

The d/prog are big mad that no consent decrees to have federal monitors exist. Big mad that the Shelby County case ended mandatory oversight and ended many States and a few counties from having to ask permission from the DoJ to run their elections.

The National Republican party has done a good job in fighting back with lawsuits to try and counter d/prog who want to alter the elections laws. Filed 80+ cases. They spent $ to train poll watchers and elections observers. They worked to build a law fare network to to get volunteer Attorneys in swing States and contested CD available on the ground to immediately challenge d/prog shenanigans.

This is the first election cycle the National Republican party is even able to do these things at scale in four decades. It’s a heavy lift and the muscle memory has atrophied. It will get bigger and better as it moves forward into the Presidential election cycle. It still takes folks willing to volunteer to become poll watchers and observers from the areas where the d/prog have had free rein for so long.

Take your federal goons and go f*ck yourselves.

States have a nullification power over fedgov,

No, they don’t. Nullification is just as much a fantasy as gold-fringe-on-the-flag stuff, or sovereign citizen stuff.

They tried it in Missouri as well and got told to stuff it.

If Federal law allowed it, it should be done everywhere—not just in places where Democrats want to control the narrative.

The Fed has targeted 24 states and sent monitors. Only two states have pushed back. Every republican run state needs to tell them to pound sand because you can bet your ass this will be used for future elections. “State X’s voting laws are so racist, the Federal government had to monitor their elections” complete with pictures.

“Every republican run state needs to tell them to pound sand…”

Only quibble –
The GOPe may be leading the scam.

The monitors will show up with suitcases of, um, “monitor aids,” which they will unpack at 3am.

I really think a number of LI commentators (not the writers) want the GOP to lose. Barry posts “The GOP may be leading the scam.” The Fine Report posts that “the GOP leadership is in on the scam.” Here we are, on election day, and these idiots are telling you not to vote because the Republicans are leading the scam on our elections today for the Democrats to win. So f—ing pathetic.

They should just stop noticing things! And if they do notice, they sure as hell shouldn’t SAY they noticed. Geez.

I think the Trump faction does not trust republican swamp critters any more than they trust Dems, I am one fits that description.

The FBI is under the DOJ.
The FBI has shown itself to be an arm of the Democrat party.
They cannot be trusted to be in the room where votes are counted

Shame they had to try to send in the admitted Feebs.

It seems President Brandon has fewer Black Panther friends than President Obama, and his AG wingman.