According to a report, Hartsfield is also facing charges connected with a GoFundMe 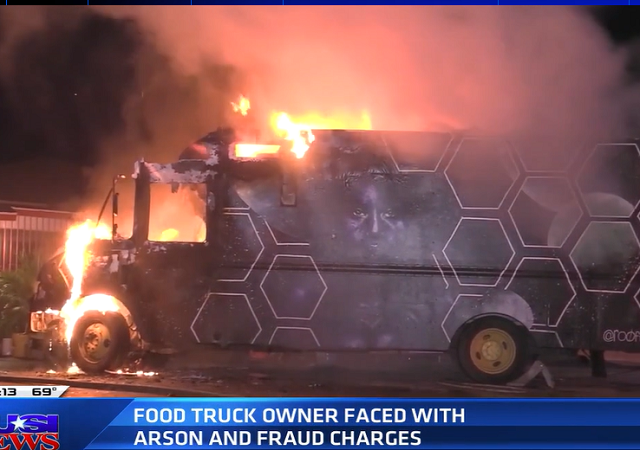 A vegan food truck vendor claimed that his food truck was vandalized, a noose was left on the truck, and his truck was ultimately set ablaze.  Avonte Hartsfield, who is black and gay, claimed that there should be hate crime charges filed when the culprit was found.

Police investigated and Hartsfield has been charged with arson and insurance fraud.

In October 2021, KUSI News and many other media outlets shared a sad story about a vegan food truck.

The owner, Avonte Hartsfield, then claimed that he would have to permanently close his “Rollin Roots” food truck after a series of what he said were arson attacks against him.

. . . . Harstfield also said the attack on his food truck was a hate crime, as he is black and gay.

But just over a year later, the facts have come out.

Tuesday, Hartsfield was charged with both arson and insurance fraud in connection to the fire that destroyed his food truck.

According to KUSI, Hartsfield also set up a GoFundMe and is facing grand theft charges as a result.

Hartsfield quickly set up a GoFundMe with a $100,000 goal. The GoFundMe description read, “My food truck (Rollin Roots) was burglarized and vandalized multiple times. Throughout the ordeal I’ve had my power chords cut, my office and truck broken into and items stolen, there was a noose hanging from the door to my office, and finally on October 3rd my truck was burned down completely. The police are in the middle of investigating at this time but no witnesses have come forward and there doesn’t look like much hope for holding anyone responsible.”

I have long-since reached the point where all so-called “hate crimes” are considered fraudulent until proven otherwise.

Just looking at most of the “victims,” your first thought is, “I can’t imagine anyone cares enough about you either way to make the effort.”

The demand for hate crimes, far out strips the supply.

I have posted on ALL the “HATE” crime fakes that I’ve read that until the PUNISHMENT for a FAKE “hate crime” is EQUAL (don’t the left want EQUITY) to a REAL hate crime then this crap will continue. When some liberidiot can make outrageous claims and commit a HATE CRIME then they will continue to do so! And REALLY, when a black person makes a CLAIM of HATE CRIME because they are “black and gay”, is that not an unjustified attack on WHITE and STRAIGHT?? The IMPLICATIONS are there! Juicy Smollehh should face the same punishment that two REAL white guys would face, but he won’t – BECAUSE!!! And speaking of the Juicy, shouldn’t he be in prison???

Isn’t it strange how the demand for hate crimes always far outstrips the supply?

But are the authorities going to accede to his request and charge him with a hate crime? It meets a definition- a crime designed to create racial discord….

That is not the definition of a hate crime. An intent to create discord is not an element.

A hate crime is a crime committed because of the victim’s (real or perceived) race, sex, etc.. The exact list of “etc.” varies from state to state. In California the list is: (1) disability, (2) gender, (3) nationality, (4) race or ethnicity, (5) religion, (6) sexual orientation, and (7) association with a person or group with one or more of these actual or perceived characteristics.

This character didn’t burn his place down because of his own race or sexual orientation. So it’s not a hate crime.

NO, he blames anyone who is NOT BLACK OR GAY! The indications are that some RACIST or Anti-gay person did this so by definition (yours), HE TARGETED someone BECAUSE of THEIR RACE or SEXUAL orientation!

I disagree that he “targeted someone” because of their race. If he can’t point a finger at a single person or identifiable group of people (i.e., that gang over there, or that biker group there) then there’s no real targeting.

However, he most certainly did what he did with an eye on the “identity” of the perpetrator – his own self!

This character didn’t burn his place down because of his own race or sexual orientation.
Actually, Milhouse, he did precisely that!

And of course, had I scrolled down a little farther, I would not have needed to post above. Good minds, as they say….

Not at all. Aggrieved groups must always lie to give justification to their grievance because ain’t enough white prior sound to give it to them.

“Throughout the ordeal I’ve had my power chords cut”
Van Halen you ain’t, Bunky.

The noose was a nice touch, though.

Here’s a class project: in the past 30 years or so, have there been any “hate crimes” that have involved a noose that actually turned out to be real? Eliminate all the cases where nobody was ever fingered one way or the other. Because right now, off the top of my head, I believe that a noose has a perfect historic record of being associated with FAKE hate crimes.

That’s because the noose is an invented hate symbol. Only would-be victims think it’s a hate symbol; actual haters don’t use it.

“”there doesn’t look like much hope for holding anyone responsible.” “”

Hey there, Avonte, I’ve got some good news and some bad news…..

Who the heck eats at a vegan food truck??

He would have been more successful if took the BLM route….they made millions and never spent a dime on blacks.

I was going to post the same thing. Meanwhile, in my state we have a chicken wing truck which only operates three days a week and almost always sells out.

“ Who the heck eats at a vegan food truck??”

They don’t call em “roach coaches” for nothing…

Evidently not enough of them or the guy would have been successful and not needed to “find a way out”! Really, how many GAY VEGANS are there???

Even if it wasn’t fake, vegan food sucks. If I was on the jury of someone accused of arson by lighting up a vegan food truck I’d vote not guilty.
Or as Marie Antwonetter used to say – “let them eat bugs”.

Lol….I disagree slightly as I’ve actually had a food truck that served soul vegan food and their mac and “cheese” was delicious. It wasn’t mac and it wasn’t cheese but it was awesome.

Other than that, though, yeah, this guy can rot.

Justice gets served against a hoaxer…now do ALL of the college hoaxers too. They shouldn’t be immune from prosecution just because they are entitled tuition-borrowing brats (that want someone else to pay for it).

Fake noose is better than no noose I guess. Someone please inform Brandon about this fake noose.

“Avonte Hartsfield, who is black and gay, claimed that there should be hate crime charges filed when the culprit was found.”

I think he should get his wish.

That was meant to be an uptick.

He about to become a lot more gay now.

“Throughout the ordeal I’ve had my power chords cut,”

As an audio engineer I can assure you: When you suck that bad at guitar, we turn you down or off in the house mix… 🙂

The moment when you realize that a “vegan food truck” is not a viable thing.