“A huge fire broke out at a prison in the Iranian capital, Tehran, on Saturday night, after nearly a month of protests over the death in custody of Jina Mahsa Amini.” 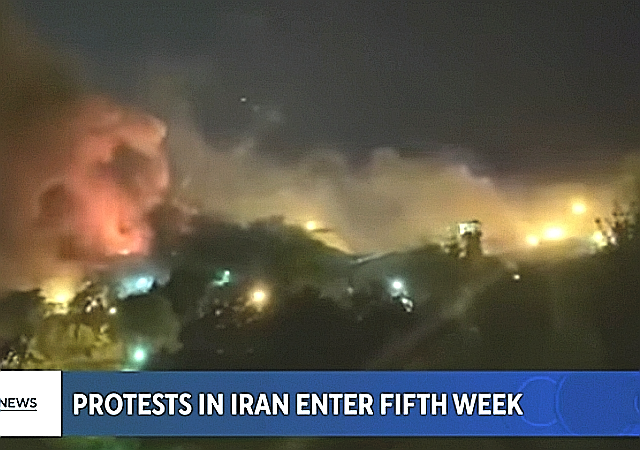 At least eight inmates were reported killed and 61 injured in an uprising in Tehran’s high-security prison as the anti-regime protest enters its second month.

In a video shared on Twitter, loud screams and gunfire can be heard as flames from the prison fire light up the night sky. In another video, Tehran residents were seen cheering the inmates from a distance — with a woman on top of a vehicle waving her headscarf — a sign of irreverence and protest against the Shia-Islamic regime.

“A huge fire broke out at a prison in the Iranian capital, Tehran, on Saturday night, after nearly a month of protests over the death in custody of Jina Mahsa Amini,” the German broadcaster DW News reported.

“Online videos posted to social media appeared to show smoke rising from the city’s Evin prison, which holds political prisoners and dual nationals. Gunshots and chanting can be heard in the background,” the news outlet added.

The infamous Evin prison in Tehran is on fire. Gunfire heard. This is big. pic.twitter.com/oC0coITH6B

The blaze at Evin prison broke out on Saturday night as nationwide anti-government protests sparked by the death of 22-year-old Mahsa Amini in police custody entered their fifth week. (…)

Flames and thick smoke could be seen rising from the prison in the capital city on Saturday night. In online videos, gunshots and explosions could be heard in the area of the prison.

State media said the blaze was extinguished after several hours and no detainees escaped.

Authorities have attempted to put space between the events in the prison and the ongoing protests, while state media has offered conflicting accounts of the violence.

The Evin prison, notorious for torture and mistreatment of inmates, is reportedly being used to detain hundreds of protestors who participated in the ongoing demonstrations. According to the BBC, “Hundreds of those taking part in anti-government protests which have swept the country for the past month have been sent to Evin prison.”

Women are waving the hijab in the air near Evin prison pic.twitter.com/k26Nc9Hjek

Tehran has unleased the Islamic Guard (IRGC) and regime-loyalist militia to crush the nationwide unrest.

However, the military crackdown has failed to quell the protests. “Meanwhile, protests continued overnight, including in neighbourhoods of Tehran.,” the BBC reported Monday morning. “In video from the north-east district of Narmak, chants of “Death to the dictator” – a reference to Iran’s supreme leader – among others can be heard in the dark.”

The unrest against the Shia-Islamic regime was ignited following the death of a 22-year-old Iranian woman, who the country’s Morality Police detained for violating Sharia-mandated hijab law.

Since the protests started on September 16, more than 250 people, including 21 children, have been killed and close to six thousand arrested, rights groups estimate. Last week, the movement spearheaded by women and students was joined by the industrial workers, reaching the regime’s critical oil and gas industry.

What’s the ratio of political prisoners to actual criminals among the inmate population? Anyone know?

I didn’t see reports making that kind of distinction.

Evin is where regime keeps high-profile dissidents, including foreign nationals accused of subversion.

Going by the reaction of the protesters, they see prison uprising as part of the movement.

I’d rather give money to support this uprising than continuing to fund Ukraine (if I had to choose.)