Chloe Cole: “”I want to hold the adults that put me in harm’s way accountable because what happened to me is horrible…” 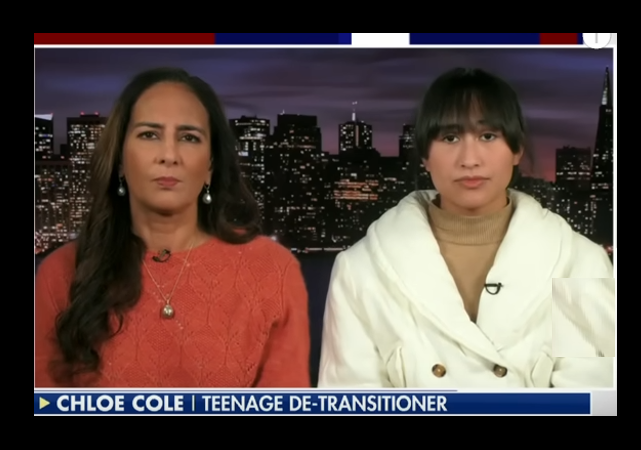 During the hearings weighing the ban, one of the most moving statements came from Chloe Cole, who began detransitioning at 16 and is battling the push for “gender affirming care” for minors. Cole noted that she was very feminine as a young girl, but exposure to the internet and leftist victim-glamorizing helped mislead her to opting for the surgeries and treatments.

She is now suing the doctors who provided the treatments.

Chloe Cole said she launched legal action against the doctors to hold them ‘accountable’ for removing her breasts and pumping her full of puberty blockers.

The 18-year-old also told how she was ‘devastated’ by the operation and fears she will now never be able to bear children.

She transitioned to a male aged 13 after telling her parents she was ‘distressed’ with her gender and consulting medical professionals.

Cole, from Central Valley in California, had the life-changing surgery when she was just 15, before regretting it and de-transitioning a year later.

Now she said she was suing the doctors who performed on her and slammed them for letting a child make such a important decision.

Cole’s goal is to attack the practice through lawfare.

“I want to hold the adults that put me in harm’s way accountable because what happened to me is horrible, but it also didn’t only happen to me, that’s the worst part. It’s happening to children all over the U.S., all over the West, and it’s spreading all over the world,” she said.

“I want to be able to create a precedent for other people who have been in my situation to find justice themselves.”

Attorney Harmeet Dhillon outlined the case against the doctors, telling host Tucker Carlson they are bringing forth a medical malpractice suit. Cole is being represented by non-profit organization the Center for American Liberty.

“Our website at libertycenter.org has the letter, a very detailed letter that details all of the medical symptoms that Chloe has and the medical malpractice. And frankly, the mutilation that was perpetrated by these medical professionals,” Dhillon said.

There used to be a long process for transitioning, back before it was “the thing to do” – I don’t know much about it, but I DO know that it involved a few years of ongoing therapy, eliminating other possible causes of the disphoria, and a full lifestyle transition for a year or more before they would even consider surgeries. It seems…..irresponsible….to shorten the time frame. Especially when dealing with children.

My grandpa cautioned all us kids, “Never stick your d* in crazy.”
Now doctors need to learn: “Never stick a d* on crazy (or snip a d* off crazy).”
And for exactly the same reasons.

Hey, kid! take a very good look in the mirror and ask yourself some questions starting with: did you go crazy and drive everyone else crazy telling them what you were going to do to yourself if you didn’t get your way?

Not this kids fault. The fault of many adult enablers who groom these children to act in a particular manner.

They started pumping her with puberty blockers at 8, testosterone at 12 and double masectomy at 15. How exactly is this the ‘kid’s fault’? At those ages a child has no understanding of long term consequences of medications. Her parents were told ‘do you want a dead daughter or a living son?’ by the school counselor and the doctors? I think the right people are being sued, although I would add in the school system?

An excellent illustration of how the legal industry encourages or even creates these messes and then plays off both ends to great profit.

I predicted years ago this was where we were headed as many children became adults and started screaming bloody murder over their abuse.

I thought my dad was over the top when he scowled at me for getting my ear pierced back in the 80s. Listen to your parents, kids!

My first thought was that you had an unreasonably old-fashioned dad, until I looked back at the header and realized you were a guy.

Today, they wear tricycle tires in their ears. Because it’s not like they need jobs or anything.

I have held a belief for years that the likes of Mengele are not at all rare. MANY are chomping at the bit to conduct experiments on their patients.

Someone in our family was not hitting puberty fast enough according to dear sweet mama, and the doc was more than willing to fill up that young family member with T shots and other things. Puberty hit fast, hard, and painfully. (It was not me…)

This just means music is only going to get worse. I thought we’d hit peak awful with the Ritalin-infused 90s ADD kids with their Pearl Jam and My Chemical Romance. Imagine how bad “de-transition grunge/emo” will be.

Not to mention Broadway entertainment. I’m not looking forward to the new wave of “Monologues.”

We all know why men take their wives to musicals.