Detransitioner Chloe Cole: My breasts were beautiful, now they’ve been incinerated for nothing. Thank you, modern medicine.” 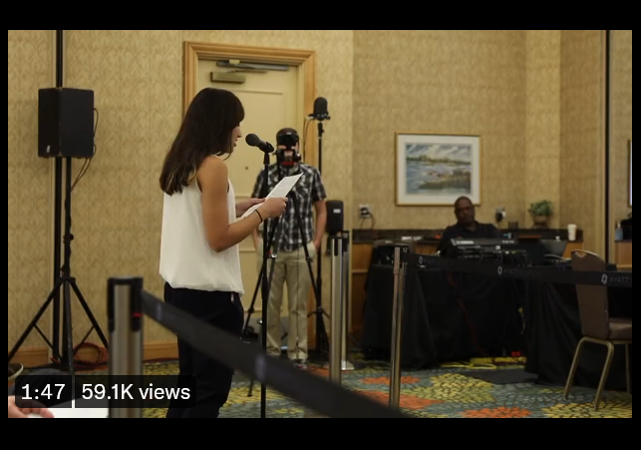 A joint legislative committee for Florida’s state medical boards has voted to advance a rule that would stop children under the age of 18 from receiving gender transitioning treatments.

“I believe that based upon the testimony that we’ve heard this morning and the materials in the portal, that the risk of puberty suppressing therapies, cross-hormonal therapy and surgery, those risks outweigh the possible benefits and that there is a lack of consistent, reliable, scientific peer reviewed evidence concerning the efficacy and safety of such treatment,” said Nicholas Romanello, a member of the state Board of Medicine who proposed the rule, according to Florida’s Voice.

If the rule is passed, minors already receiving the treatments would be allowed to continue if they were part of an Institutional Review Board-approved clinical trial at an affiliated university center.

The guidelines are clear and reasonable.

Earlier this year, Florida Surgeon General Joseph Ladapo requested that the Board of Medicine establish a standard for care for trans teens. The recommendation will now be passed on to the full medical board, who are likely to adopt the recommendation.

Legal Insurrection readers will recall that I recently did a health and safety assessment on puberty-blocking drugs promoted by Planned Parenthood. Prior to the vote, the committee heard a great deal of testimony from teens who are now detransitioning, because they regret their decision.

During the testimony, witnesses revealed that the effects of transitioning are not readily reversible and the use of drugs and hormones did produce side effects.

Advocates for the ban on trans care testified during the meeting, and included de-transitioners.

One woman explained that she was diagnosed with PTSD, OCD and even attempted suicide while using testosterone while she was living as a transman.

Since de-transitioning, she said her mental health has improved but she still has a disrupted menstrual cycle and other after effects.

‘But if I had gotten surgeries that I so desperately wanted as a teenager, that would’ve stolen this future from me.’

One of the most moving statements came from Chloe Cole, who began detransitioning at 16 and is battling the push for “gender affirming care” for minors. Cole notes that she was very feminine as a young girl, but exposure to the internet and leftist victim-glamorizing helped mislead her to opting for the surgeries and treatments.

“My breasts were beautiful, now they’ve been incinerated for nothing. Thank you, modern medicine.” My public comment at the Florida Board of Medicine meeting in Orlando today. pic.twitter.com/NUuouffjqM

Cole has also slammed Biden, as he recently expressed support for “gender affirming” medical treatment for transgender minors, which pressures medical professionals to affirm and not question a child’s gender identity.

…18-year-old Chloe Cole, who was born female and transitioned to male as a young teen before “detransitioning,” thinks Biden’s stance could lead more young people down the road toward irreversible medical treatments.

“What Biden was saying is dangerous,” Cole warned. “He’s trying to advocate for further experimentation on children.”

The California teen, who began identifying as a boy at age 12, started puberty blockers and testosterone treatment at 13, and had an elective double mastectomy at 15 to masculinize her chest. By 16, she regretted the surgeries, which she says were spurred by insecurities about her appearance and the influence of social media rather than gender dysphoria. She blames medical professionals for failing to question or prevent her rapid transition.

“I was failed by the system. I literally lost organs,” she told The Post in a previous interview.

Here is hoping Florida moves forward with the recommendation, and it is adopted by other states.

Let’s hope that this spreads like wildfire throughout all of America.

History will show that little girls who want to be boys are going through a phase. “This too will pass.”

Yeah, but what about affirming little girls who want to be princesses?

Studies have shown that 99% of little girls who want to be princesses when they grow up change eventually their minds. Meghan Markle disagrees and thinks the number is much higher.

[Above all, whatever else you might do with the patient] … first, do no harm.

First I blame the parents for this

Then I do blame the medical community

And the. The political monsters

The parents that allow or even encourage this, the schools and the medical community ARE the political monsters.

We won’t allow children to drink until they are 21, but we will allow prepubescents to mutilate themselves because they have been conditioned and groomed by social(ist) media, radical teachers/administrators, and “woke” “doctors.”

The leftists should be very proud. /sarc

The last brain function to gain maturity is risk assessment. That happens around 25. But, I’d push the ban to 21 from 18 if possible. Self-mutilation is not normal but …”anything goes” these days.

Technically, it is sex deaffirmation. If I can accept that I will never be a 7 foot tall black NBA star, then people ought to be able to accept their genetics about sex as well.

It is impossible for anyone to be changed into the opposite sec. It is a fact that a person’s gender is determined by their genes not anything else. Being unable to accept reality is mental illness. Society should embrace this mental illness we should develop a cure for it.

On thing we must to is refuse to use their Lexicon.

Gender Affirming Care – Would be therapy to treat their dysphoria. Not medical mutilation.

Gender Transition — Is a made up term that does not exist, you are born what your Chromosomes determine and there is no way to “transition” from that.

Gender is not “Assigned” at birth, it is observed and is based on the biological norm of the species.

Once upon a time (like this morning) the WHO defined Female Genital Mutilation (FGM) as the “partial or total removal of external female genitalia or other injury to the female genital organs for non-medical reasons”.

Now the WHO website has removed any mention of “gender dysphoria”. So I guess they cured it.

That’s progress for ya.

“She blames medical professionals for failing to question or prevent her rapid transition. ‘I was failed by the system…'”

Still offended by this outlook (largely characterizing the left) that all her troubles are someone else’s fault, and that her own contribution to the outcome is so minuscule as to not rate a mention.

‘But if I had gotten surgeries that I so desperately wanted as a teenager, that would’ve stolen this future from me.’

A different speaker, to be sure, but one much more fairly apportioning the real-world responsibility.

What’s next? The tattoo parlor is to blame because they should have known how much I was going to regret my tattoo/piercing 20 years down the road? John Doe Chevrolet shouldn’t have let someone as irresponsible as I am buy a fast car? The gun dealer should have known how unstable I was and refused to sell me a gun?

Oh wait, the last one isn’t next — the legal requirement for a gun dealer to be able to read your mind has been in place for decades.

Anyone under 18 should not be prescribed puberty blockers or hormone therapy.

This is not a reasonable rule. There are legitimate uses for puberty blockers, e.g. for children who are entering puberty too soon.

PS: Anyone over 18 should definitely not be prescribed puberty blockers!