China will also not pay “climate reparations” with cash. 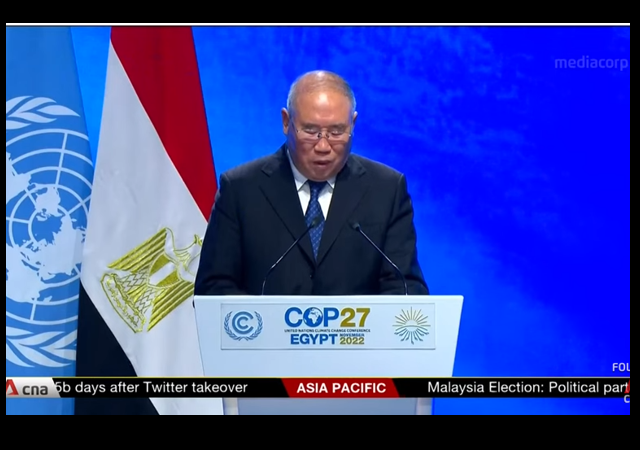 Say what you will about China, but it definitely maintains a “China First” stance when dealing with elite globalists.

Take, for example, what Chinese officials are reportedly doing at the 27th Conference of the Parties (COP27) in Egypt. They may be forcing the globalists to abandon the ridiculous pledge to limit global warming to 1.5°C (2.7°F), according to insiders to the negotiations.

First drafts of the pact to emerge from the United Nations Cop 27 meeting in Sharm El Sheikh, Egypt are expected to be issued tonight.

But the promise that the Earth will not be allowed to warm by more than 1.5°C (2.7°F) could be dropped, with China pushing for the wording to be dropped.

…China, the world’s largest greenhouse gas emitter by volume, is urging behind the scenes that countries should aim for 2°C (3.6°F) as it would require less drastic restrictions on its industry.

US climate envoy John Kerry has made thinly veiled digs that China wants to scrap the limit.

India is also not on board with the arbitrary number. Conference officials should have expected this sticking point, as the o 1.5°C (2.7°F) goal has been questioned since August.

…[A]t a G20 meeting in Indonesia in August, ministers were unable to agree a communique on climate change, as China and India were reported to have questioned the scientific feasibility of the 1.5C threshold.

Such are the differences between countries here, there are fears that the final document being drafted by the Egyptians may dilute or exclude the 1.5C goal.

“I have been worried that there seems to some kind of attempt to say maybe 1.5C is not achievable any more,” the former President of Ireland, Mary Robinson, told the Irish Times on the sidelines of this summit.

“That is not acceptable,” she said.

Mrs Robinson, who is chair of the Elders group of former political leaders, has released a statement with around 200 of the world’s largest businesses and civil society groups urging governments to align their national targets with 1.5C.

Finally, China has let it be known it will only be paying “non cash” climate reparations.

China would be willing to support a mechanism for compensating poorer countries for losses and damage caused by climate change, its climate envoy Xie Zhenhua said Wednesday at the COP27 climate summit in Egypt, but China later said that would not involve contributing cash.

Xie said China had no obligation to participate, but stressed his solidarity with those calling for more action from wealthy nations on the issue, and outlined the damage China had suffered from climate-linked weather extremes.

“We strongly support the claims from developing countries, especially the most vulnerable countries, for claiming loss and damage compensation because China is also a developing country and we also suffered a lot from extreme weather events,” Xie said, speaking through a translator.

Perhaps if China prevented the global humanitarian disaster that would occur if these policies were implemented, it might go a small way to making up for the covid pandemic it unleashed from Wuhan.

In a nutshell, China has been the best thing about the 2027 conference of climate alarmists.

The whole climate change thing would be funny if it wasn’t such a tyrannical power grab to re-distribute wealth.

It’s all a bunch of lies.

Few people realize that in the network of climate monitoring stations used for these ‘climate models’, the average station covers an area in excess of 12,000 square miles in size. So you’re right, the idea that they can even MEASURE ‘global average temperature’ with high precision is absolutely absurd. The whole thing is a house of cards built on a farcical foundation.

Data from the atmosphere over the oceans is even worse.

The same is true trying to ‘extrapolate’ data for temperatures 200 years ago.
Here in NC.

You had 3 to 5 stations that recorded temperatures 200 years ago, all it the Eastern part of the state. And, when you compare them to 2000+ cities and towns recording today, you have to extrapolate and makeup numbers for the other 1995 locations. If you are off tenths of a degree, it supports a warming event or an ice age.

Not only that. We have stations that were originally placed in the middle of an empty field that are now surrounded by an asphalt parking lot.

Geologically, the earth hasn’t yet “recovered” from the last ice age yet. Or so I vaguely remember being told in school back in the ’70’s; the earth was supposed to be warming and our activity put us at risk of plunging back into another ice age prematurely. Truth is that the climate is “supposed” to be ever changing. Yes, we affect things, just like every other organism on the planet (6th grade science concepts!) – the absurdity is the idea that we can “Prevent Climate Change. That may not be possible even after everthing goes up in flames.

China realizes that they are already communist and have all the power, and don’t want to distribute it anywhere but in China.

Besides, it takes a lot of air flights to get their “grad students and postdocs” over here for “research.”

I wonder what the “correct” global temperature is, and how they arrived at that number.

I think Douglas Adams said it is 42 but I can’t figure out if it should be in degrees Fahrenheit or degrees Centigrade. https://hitchhikers.fandom.com/wiki/42

Not so much redistribute wealth as to destroy it or at least destroy the ability to maintain a middle-class lifestyle in the West.

The oligarchs will be keeping their coastal estates and private jets. We will be ‘encouraged’ to live in small apartments in high rise buildings concentrated into a few mega cities eating a very different diet than our rulers and expected to be compliant and obedient drones .

Of course China wants this. It will continue unabated in Asia while America cuts her own throat.

Global Warming is a class war where the Elites are attacking the Middle Class.
Poor countries will never be given the chance to work their way out of poverty.

I never thought I would cheer for Communist China. Greta will not be amused though.

“Xie said China had no obligation to participate, but stressed his solidarity with those calling for more action from wealthy nations on the issue”

“The rest of you should indeed kill your economies so we can benefit from your weakness and stupidity.”

Xinnie the Pooh!! ROTFLMAO!! He hates that!!

A leader looking out for his nation’s best interests sounds like this.

The arrogance if mankind to think they can modulate the Earth’s temperature,is astounding

The utter ignorance of science and human hubris to think they should or need to is quite apparent to those not funded by government grants….

There are very very few of these people who actually believe these efforts will have even a miniscule effect on the climate. They are there to be part of the club, the IN Crowd, the cool kids and, of course, the ones with the most money.

In fact, they don’t care if it works, or who it hurts. They only care about being seen to be on the right side of history (to coin a phrase). They are sheep in wolves’ clothing.

I have said it for years. These climate activists can’t be taken seriously if they’re not willing to stand up to the biggest emitters of greenhouse gasses. The western world bears the brunt of their senseless policies while the East pulls ahead. If they truly believed this was a world ending catastrophe in the making, they’d be willing to do even more than simply ask China politely to stop polluting. But they are not serious people with serious ideas.

… but President-ish Biden apologized to these people for The Bad Orange Man’s pulling out of that same “agreement.”

The honesty to say “We ain’t doin that.” is apparently worse than sayin you’re in, the “Naaaah.”

Gee, if only there were an American politician who would step up and demand “America First” policies….

You can’t rely on China to save America.

They will just get cut in on the grift and carve out exceptions for themselves since 90% of it is a scam anyways.

This is basically their way of saying pay us to hush up.

Unlike our s0-called “leaders”, the Chinese aren’t stupid enough to cut their own throats.

The Chinese claim third world status which exempts them from wasting their money on Climate BS.

When asked, “How long will it be before China becomes a developed nation?” Xi said, “When the Ming Dynasty is restored.”

It’s working though. They’ve scared the shit out of the millenials and vulnerable old people. Seeing it myself every day.
People still scared over the wuflu, scared over globullschiff warming and other alarmist nonsense.
Fear is the only weapon needed. Scare the sheeple and you own the world.

the models that most closely agree with observations suggest anthropogenic warming will peak around 2070, and of course no one knows what natural variation will do

still, it’s hard to imagine future generations will not marvel at the foolishness of spending tens of trillions to cool an Earth barely warm enough to support human civilization by (at most) a few tenths of a degree