The reporter also asked Biden if Musk is a national security threat, but he ignored that part of the question. 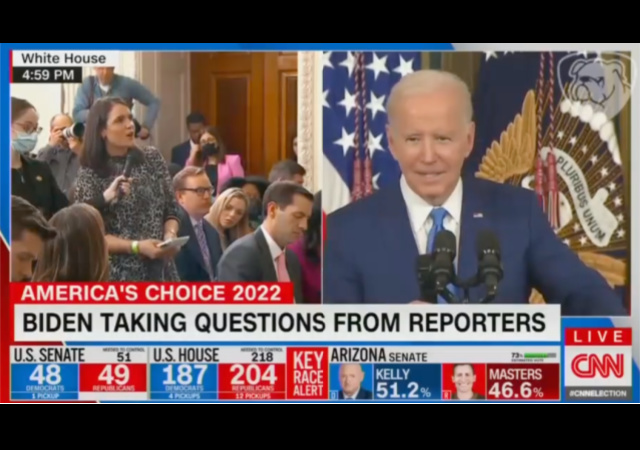 For some reason, Bloomberg’s Jenny Leonard thought it was a good idea to ask President Joe Biden if he thinks Elon Musk is a national security threat and someone worthy of investigating.

Biden ignored the first part but still. Come on. How about we investigate Hunter Biden’s connections to other countries? That’s a can of worms we should open.

Bloomberg’s @jendeben: “[D]o you think @ElonMusk is a threat to U.S. national security and should the U.S…investigate his joint acquisition of Twitter w/foreign govts, which include the Saudis?”

Who is going to stop him, McConnell? McCarthy?

We have to accept a few things here.

First, we have to accept our elections are utterly compromised.

Second, we have to accept we have a treasonous, corrupt madman in the White House.

Third: we have no hope for the future of living in a safe, free country until we secede.

Regardless Of Who’s Elected, Imperial Corruption Rules The Nation:

Elon Musk’s cooperation with other countries needs to be looked at.

But not Hunter Biden’s.

Get used to it, unless we secede.

EXACTLY…..we suddenly have to vet our unapproved-by-the-left job creators but our leftist politicians are immune from vetting.

Not to mention Brandon’s.

Many stories about them, like this one, exhibit two of the above-mentioned three deficiencies.

Cooperation with other countries is not a crime! There is nothing for the government to legitimately “look at”.

That is why I never paid any attention to the whole Russia hoax from the beginning. My attitude from the start was that I didn’t care if the allegations, as devoid of foundation or substance as they might be, were true; suppose every allegation made (not merely slyly hinted at) were true, Trump would still have been innocent of any crime, so it didn’t seem worth my time to even form an opinion on whether they were true. Of course eventually the truth came out that they weren’t, but it made no difference to me.

Yep. A citizen businessman or woman can work with whatever country they like as long is it not under economic embargo with the US. Even then, there may be some legal avenues to do business.

It’s chilling that Biden and his handlers even think this is worth commenting on. Are they going to go vet Warren Buffett or perhaps a non-citizen like George Soros next? or ever??

Are they going to go vet Warren Buffett or perhaps a non-citizen like George Soros next?
Hmmmm. We know they won’t. But does that open up the door for a newly Republican Congress to investigate those two? How could that be used to advantage?

As long as their business was not subject to ITAR restrictions, sure.

“There is nothing for the government to legitimately “look at”.

The same was true for Jan 6, I feel for those people, and want to see them free and extracting retribution. The same is true for a bunch of other people.

They can, and likely will continue their slimy attacks, at least until they have first hand experience with being in the same situation.

I would agree with you if the institutions had integrity but frankly they don’t.

If they had integrity than there would be no look into Elon Musk.

However they don’t so you could count on a very long and sustained fishing trip.

Show me the man and I’ll tell you the crime

Add to that the endless regulations which I am 100% sure Elon Musk obviously doesn’t have memorized (he is not a computer) there are ways a partisan DOJ are going to make life hell for him.

The “whole Russian Hoax” was BS from the start based on President Trump’s actions that were not in Russia’s interest.
1. Driving down oil prices via increased U.S. production.
2. Selling ABM systems to every allied country surrounding Russia (& China).
3. Browbeating NATO to increase defense spending.
4. Killing Russian’s in Syria.

The “Russian collusion” BS was used to create a new office in DHS, and that office was promptly turned towards surveillance domestic “election interference”, aka “opposition opinion and thought.”
https://foundationforfreedomonline.com/11-9-22.html

Imagine, you are a “journalist” on the White House beat, waiting months for a presidential press conference, and that is the question you ask the day after midterm elections? It was only topped (barely) by April Ryan’s obsession with race.

The Dumb-o-crat media lapdogs/shills/propagandists are all competing with each other to see who can be the most gleefully and dutifully slavish, obsequious and sycophantic lackey in service to the Dumb-o-crat agenda and Narrative (TM).

It’s utterly nauseating, but, par for the course.

Remember: the Nazis were ELECTED.

In other matters, please show these 3 hacks the door:

We just agreed on something. FWIW

He’s not what he seems

Jordan was great until he started taking Google money.

4. Lindsey “you have guns, use them!” Graham

“Nice social media company you have there — it would be a shame if anything were to happen to it.”
———-

Simply contemptible conduct from the dotard, who acts more like Idi Amin with each passing day.

Good description, might see a human leg or arm
Served at the next WH dinner.

In know you’re jesting, but, I’ll tell you that no act of depravity and evil from the vile Dumb-o-crats surprises me, anymore.

With these folks, squab.

Well-to-do lady, suggesting what she might serve at her dinner party: How does squab sound?
Reverend Jim: Coooo, coooo, coooo.

As a followup, Jenny Leonard asked Biden why he took a lid so early on election day.

Biden said, “I was afraid because, after his first mid term, Obama got shellacked. But when I stuck my head out this morning, I found out I only got a few drops of varnish on the back of my head,”

There’s Something About Brandon.

They still carry his water don’t they?

Dutifully, gleefully and obsequiously, without spilling a drop — as the media lapdogs/shills/lackeys perennially and predictably do, for all Dumb-o-crat apparatchiks.

Biden: “I think…[his] cooperation…w/other countries is worth being looked at”

Sure Joe, We’ll get to it right after we get done looking at the Biden family’s cooperation with other countries.

Did he encourage everyone to use TikTok instead?

Because the Chinese Commies are our friends and wouldn’t misuse all that data they’re collecting on US citizens who use it.

May be the ChiComs have a deal to share some of it with the Biden admin. Sounds about like something Hunter or Klain would arrange. While telling Garland to look the other way.

Does he not know about the the whole military and NASA contracts with SpaceX thing?

And there was that 5th crewed flight to ISS for NASA two weeks ago.
Our astronauts no longer have to hitch a ride with the Russians to travel to and return from it.

His puppeteers aren’t all that bright either.

With all due respect – which is none at all – up yours, Brandon.

I wonder how much thought Musk gave to the fact that his acquisition of Twitter was going to make him a shit magnet for every paranoid Marxist politician in the country?

Some I would think but FU money is a beautiful thing.

I think Hunter’s “10% for the Big Guy deals are very worth looking at.”

Joe is big mad because EM is not in the pocket of the IC.

America’s third Red Scare, “Are you now or have you ever been in favor of free speech in the United States?”

Whatever thingie you are operating, has to be “looked at” to ensure it’s in line with the grand govt coordination; the one with the will of the people figurehead making speeches translated from the original German.

Biden’s activities in Ukraine and China also need to be investigated and hopefully the new Congress will do just that.