A once lively shopping center now desolate due to safety concerns. 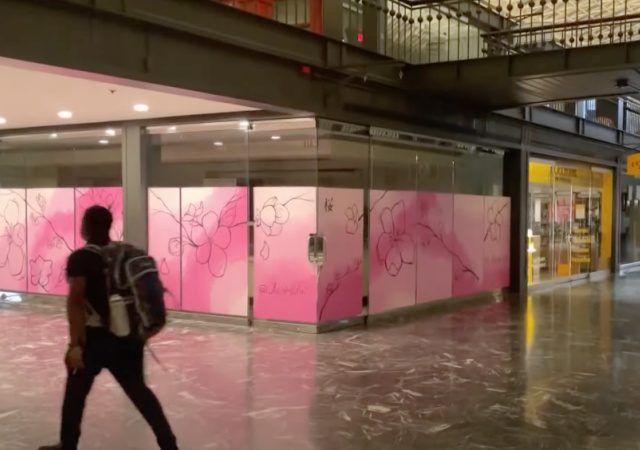 President Joe Biden will give a DNC speech at Union Station near Capitol Hill because “that’s where there was an attempt to subvert our democracy.”

Except we live in a republic that has democratic aspects.

But Union Station is a great spot because it emphasizes the worries of Americans that Democrats choose to ignore.

Economy, crime, and security. Homeless encampments used to surround the building, but the city cleared them out over the summer.

Union Station used to have an incredible shopping center. Most stores closed because of crime.

Joe Biden plans to speak from Union Station tonight — where crime is out of control pic.twitter.com/5o4vzgu5jl

Reminder: the Starbucks in Union Station, where Biden is speaking tonight, closed earlier this year because of out-of-control crime in a Democrat-run city. pic.twitter.com/hw4gCAbums

President Biden plans to deliver an address Tuesday night from Union Station in DC. This once-thriving shopping center is now practically a ghost town. I took this photo of empty stores on Saturday. pic.twitter.com/UqgMwxGOnP

Union Station was so bad in the 80s someone attempted to mug my dad there. When I moved a few blocks away in '99, it had a huge food court, shops, movie theater and thrived for the next decade or more. Now it's back to this — DC let this happen. https://t.co/v5y66LjWWU

Except for the violent out of control crime, it’s really a pretty nice place.

No, you gaslighting, senile old c*nt. The attempt to subvert our democracy is you and your Fascist goons coordinating with Big Tech to censor millions of us.

Maybe he’ll give another Hitler speech like at Independence Hall.

I hadn’t realized grandpa was going to yell at us tonight. Haven’t we been staying off the grass?

Obama isn’t having fun either. BUT perhaps that is a good thing he IS on the campaign trial. Why? Because he’s helping reducing the ODDS that Michelle will be on a 2024 ticket.

Pray that Michelle does NOT even think about running for the Oval Office…EVER!

I was just there yesterday. I didn’t go upstairs but the food court downstairs was desolate with only about a third of the franchises open. I got a chicken quesadilla at the Taco Bell served by a surly and frowny faced Latina. Instead of asking me “May I help you?” she said “Wadda you want?”

If Union Station doesn’t work out, he’s welcome to come out and give his address from our local Golden Corral Buffet. Nobody is using it for anything anymore.

Maybe Brandon will speak in front of a blue screen with a CGI generated thriving Union Station projected on it.

Better he wears a green shirt so they can project a nazi uniform on him. It would be more fitting.

Please. He’s a terrible president but hardly a Nazi

He calls me a terrorist, again and again. He’s a Nazi.

IDK man, Biden seems to be in favor of:
1. Using State agents to harass and intimidate those who disagree
2. Use of the State to punish political opposition
3. Indefinite pretrial detention for folks guilty of misdemeanor level offenses
4. Coordinate and Collude with media allies to silence dissenting voices
5. Insists that Rona continues to be an emergency, reauthorize his emergency powers
6. His DoJ has argued in favor of racial discrimination and racial segregation
7. His ‘ministry of truth’ was only briefly scuttled due to the choice to run it Scary Poppins
8. Multiple high level executive branch appointments for people who openly despise the Nation, its norms and traditions
9. Threatening to Nationalize the Energy Industry
10. Force taxpayers to pay off the Student debt of those who went to College and thus have much higher lifetime earnings on average

There’s more but that seems like enough. All that plus he wants to expand socialist fever dream ideas across the Nation which in simplest terms indicates he does in fact want to take Socialism National……which sounds a lot like someone who is a fascist of the Mussolini variety at best.

Clearly has his own propaganda ministry, and casual about “influencing” “private” action the regime prefers.

“Nice twit-space you have there, Elon. Would be a shame if anyone National Security-ed it out of operations. Or, you know, investigated every other operation of yours to death. How’s those launch approvals goin, BTW. Contra, for example The Zuckerbot. He gets it. ‘Don;t 230 me, bro!'”

Dark Brandon also does seem inclined to socialize everything at the national level. And unions. Be pro-union or it doesn’t matter how many more e-cars you’ve plugged in than anybody else: not the workers, you don’t count.

Of course the teachers unions will vote Brandon — they got paid for two years to not got to work; meanwhile industries not properly juiced in with The Big Guy’s crew got locked out, n shut down.

Let me connect the dots for the faux-dense. I know reasoning from definitions to conclusions is hard and uncomfortable, but go with me, here…

Fascist Ideology — From the metaphor of the strength of a bundle of sticks, applied in common purpose. One mission, everyone in line. With a symbolic head of the meaning / spirit of the Volk, who are the nation.

The Figurehead In Chief is fallling down on the “German” part, as well as stairs and bicycles, but I suppose “You ain’t American.” counts as a similar ethnic nationalism. Unclear whether 1/1024th-in-tent counts among the Volk or not.

I’ll take door #anything but this, thank you.

Speak for yourself. The pedophile is a nazi who tried to force people to take experimental injections that nobody needed that didn’t work anyhow.

A neat trick to pull would be the bustling background be stock footage from 1955. Men in suits and hats. Women in dresses. “Negro” red-caps carrying baggage. Then see who notices.

Oh Griz, how I sincerely long for such “good old days”, before the Communists took over.

You and me, both. I am firmly convinced that even with formal segregation we were more unified as a people than we are now. Let a fire, earthquake or flood take place, and we all came together. No hyphen-Americans.

It was also a time when the national attitude was that we could do anything we set our minds to do. Polio vaccine. The transistor. A practical jet airliner.

Entertainment was clean; the talent of the time was amazing.

Yeah, that worked out so well for a batshit crazy mayoral candidate here in N.O.

Bitch went to jail briefly and then upon release, “I feel like Nelson Mandela!”

Forgot to add. I knew it wasn’t the French Quarter, despite missing the Disney trashcan.

1. The streets are too wide.

2. The streets (and buildings) are too clean.

That was a pretty good Costello imitation.

Or homeless camps! Out of the cold wind for winter!

Predictions: after the midterms are complete (which may be delayed by a runoff in Georgia), Joe will pardon Hunter. He will then announce that he will not be seeking a second term.

They are going to have to peel his fingertips off the doorjamb of the Oval Office to get him out.

Dr Jill may glue her hand to the Resolute desk

Bruin, Meet me back at LI after Georgia election!

Noooo… he’ll borrow some crazy-glue from the the art vandals in Europe.

The media, DOJ and our tech overlords have already pardoned Hunter.

What are the odds of the Biden-azi DOJ to indict Trump for anything?

I’m reading about the odds of Trump’s announcement for a 3rd run..this Saturday or next Wednesday. I doubt it but that would be fantastic…sooner he does!

It was always too crowded for me. I’m sure I can get a seat in the food court now, Food may not be available so I’ll pack my lunch and leave my cash at home.

President Joe Biden plans to deliver another fervent warning on Wednesday about Republicans and the threat they pose to the future of democracy in the United States.

The president plans to talk about “preserving and protecting our democracy” and will “address the threat of election deniers and those who seek to undermine faith in voting and democracy” according to a media advisory from the Democrat National Committee.

This will be about as well received as Trump giving a national address on Comet Pizza. They have no idea how insane this makes them sound.

The insane never think that they are insane; it is always YOU who can’t understand.

And they cancel you to make sure you don’t spread your “misinformation.”

As we watched a senile Joe Biden angrily lie about and trash Trump and his MAGA base, the Democrats are following their playbook. They will always let you know who they fear the most by who they attack the most.

I’m old enough to have seen the “full cycle” in person at Union Station. Thanks Joe!

I saw this “Except we live in a republic that has democratic aspects.” in the above article. This isn’t the first time I saw this notion of describing our government.

The more I see this, the more I shake my head and detest it. I see this as an appeasement to the Democratic Party. Much like the Jews loving the word, “Liberal” because it translates to “Liberation” (aka freedom from the concentration camp).

The Spirit of Law claims that only a small “Republic” can be successful but Hillsdale College believes that an expanded Republic can work. The only way the Republic can work is for the country to believe in a Republic, which includes the founding principles and values. Remember the founding quote about the government can only be run by Angels?

This country keeps using the word, “Democracy” or “democratic aspects” and this is dangerous because it is an attempt to indoctrinate us, including our children, that a democracy or democratic aspect is good for us.

We must use the word, “Republic” without adding a “with” or “else” or “exception” clauses.

I pay no attention to his so-called “Speeches” because the format is the same regardless of subject so why inflict his voice on yourself? Our Republic is in danger because deranged types like Crazy Joe are among us.