He also showed support for the defunding of the police and ICE movements. 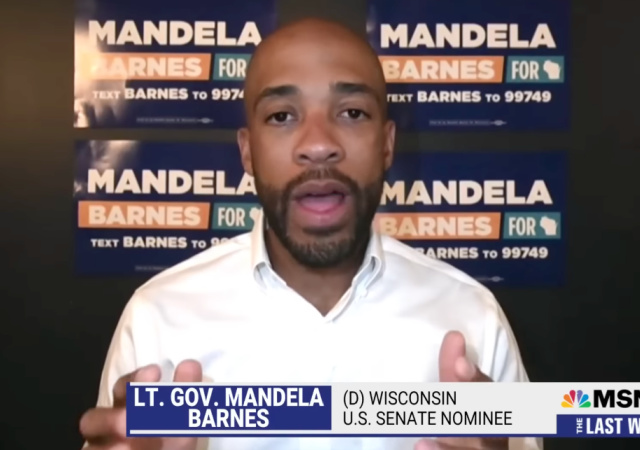 Why do the Democrats accuse Republicans of getting cozy with dictators worldwide? Rhetorical question.

I will never forget Pelosi visiting Assad in Syria when she first became Speaker of the House.

Barnes has also made numerous appearances on Russia Today, a Russian propaganda station.

“The issue of US govt oppression against blacks is a 100s year-old issue,” wrote Khamenei, adding the hashtag #BlackLivesMatter.

Barnes “liked” Khamenei’s post on Twitter and responded to the Iranian leader: “The first tweet of 2015 from @khamenei_ir is #BlackLivesMatter. Let that sink in. May This be a most wonderful year for you and yours.”

In 2017, Barnes compared black musician Tina Campbell to a slave because she supported Trump.

Barnes also bragged he did not “accept” David Clarke, the former Milwaukee sheriff, “as black” because he is conservative.

Guess the shackles are still on her feet after all. https://t.co/6Tr0HIuz8G

Barnes didn’t praise Syrian dictator Bashar al-Assad, but he wanted to become the “Dennis Rodman” of the conflict between America and Syria. Rodman has traveled to North Korea many times to, I guess, establish peace with the Communist kingdom:

Barnes also wrote several posts opposing any U.S. effort to oust Syrian president Bashar al-Assad in 2013, while the embattled dictator was massacring his own people and using chemical weapons.

“I’d like to pull a Rodman next. I should have hopped that fence to Syria when I had the chance,” wrote Barnes on April 9, 2013, a few weeks after Assad’s regime carried out a deadly Sarin gas attack against its opposition.

He also opposed efforts by the United States to aid the Syrian opposition after Assad’s use of chemical weapons.

“Seeing school administrators plead for more state aid, but seeing that our country is able to send weapons to Syria makes me more anti war,” wrote Barnes in June 2013.

Barnes said something similar about Saddam Hussein: “when you drop cookies, you get crumbs everywhere. Then you gotta get a vacuum, and that’s what happened when we removed Saddam.”

Barnes tweeted that he wanted to find a job at the U.S. embassy in Cuba. At a Civil Rights discussion, he admitted his father wanted to name him Muammar after the Libyan dictator Muammar Qaddafi.

In a recent ad, Barnes insisted he never said he wanted to defund the police and abolish ICE.

In multiple posts from 2018 uncovered by CNN, Barnes liked tweets that criticized the immigration agency and called to abolish them. He told a group that supported abolishing the institution in 2019 that the “wrong ICE” was melting and attended one of their “Abolish ICE” local rallies.

This week, Barnes pushed back on attacks on his record on criminal justice and crime, saying he wouldn’t be “lectured on crime” by Republicans, citing the January 6, 2021, riot at the US Capitol in which more than 100 police officers reported injuries.

Though Barnes has never outright embraced the “defund the police” slogan, he has on numerous occasions said he supports redirecting or decreasing police funding – even before the slogan gained popularity in 2020 following the murder of George Floyd by police.

In one 2020 interview reviewed by CNN, Barnes told a local Wisconsin public radio show that funding should go to social workers and a “crisis intervener or a violence interrupter,” instead of police.

Dictators seem to be optimal for third world states. There’s a lot of dictator-cost but at least they stamp out population factions killing each other, as in Saddam.

I’m sick of their lame adages like cookies and crumbs.
Who has a broom? His brothers cut off the electricity and his vacuum no longer works.

Seems he’s the one stuck on the plantation.

Wearing full ideological shackles, like so many of his misguided, victimhood-wallowing brethren.

With so called “leaders” like this fool, black America is doomed.

Black “leadership” has been malignant, corrosive and self-destructive for decades. Look at Al Sharpton’s vile incitement and Jew-hating antics from the 1980’s. Yet, the reprobate is still welcomed with open arms in Dumb-o-crat circles and is gifted a prominent media perch, instead of being shunned and made persona non grata. Same thing with the black Muslim converts and Jew-haters, vicious bigots such as Farrakhan. Why did narcissist-incompetent, Obama, feel totally comfortable burnishing his “street cred” with the black community in Chicago, by mugging for the camera with Farrakhan? Because the vile Dumbs elevate corrupt and morally rotten black “leaders.”

Named after Nelson Mandela, he won’t be happy until America becomes like South Afirica

“This week, Barnes pushed back on attacks on his record on criminal justice and crime, saying he wouldn’t be “lectured on crime” by Republicans, citing the January 6, 2021, riot at the US Capitol in which more than 100 police officers reported injuries.”

But he(?), as a BLM (Burn, Loot, Murder; bring lotsa money) booster, can lecture the Republicans on that inflated protest on J6.

Liar and a fraud. Or a typical Democrat.

IMO whackos we are seeing in the last few years is the natural progression of the d/prog echo chamber in academia, media and other elite institutions. They always had these divisive beliefs but kept them on the down low among themselves.

Obama and HRC with their bitter clinger /deplorable remarks in public turbocharged the transition. Today we have d/prog in open forums and in full public view supporting: Abortion after being born ‘make the baby comfortable’; burlesque theatre drag shows for kindergartens, books about sex in elementary schools, trans as normal, coddling criminals at the expense of public safety, govt funding for all sorts of failed programs while ignoring the basic functions and duties of govt.

The d/prog and media have embraced, empowered and enabled these frankly bizzaro positions as if they enjoyed majority support. They will pay the price this fall at the polls. It’s one thing to be tolerant of others and have a live/let live outlook. The d/prog reject that by demanding we conform to their beliefs by positive, affirmative actions to embrace their beliefs.

The d/prog let their freak flag fly to openly and the public in large measure was forced to view the reality of these policies and their impact. The choice is being forced to adopt this insanity or reject it wholly. There isn’t a middle ground because the d/prog won’t allow one. Now they will pay the price for that foolishness. It’s not beyond conceivable that the d/prog implode into a inter party battle resulting in a split of socially more conservative local d for the foreseeable future.

Silver linings are relics of the past.

They will express shock and outrage at the backlash

Let’s turn that into shock and awe.