Doing the safety assessment of histrelin acetate and leuprolide acetate that Planned Parenthood won’t do. 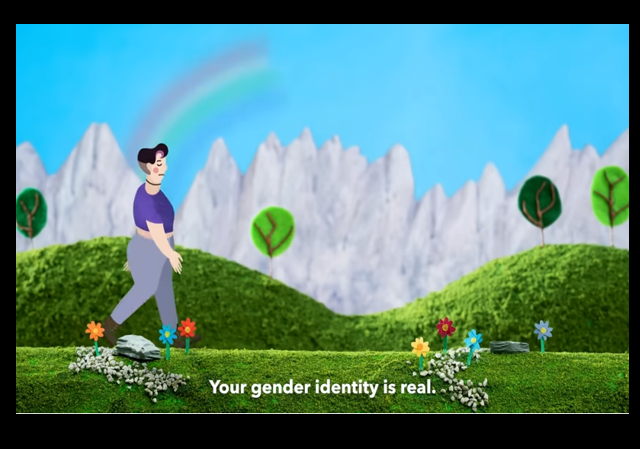 Last week, Planned Parenthood was widely criticized for a cartoon ad that touched upon the use of puberty-blocking chemicals, which the organization claims ‘work like a stop sign.’

Planned Parenthood claims in the video that puberty blockers – which block hormones testosterone and estrogen in the body – are safe and can allow teenagers more time to ‘figure out what’s right’ for them.

The video encourages kids to talk with a trusted adult, a nurse or a doctor.

‘Puberty blockers are safe and can give you more time to figure out what feels right for you, your body, and your gender identity,’ the organization claims. ‘You don’t have to have all of the answers right now.’

‘Your gender identity is real. You should be the one to decide what changes you want to make to your body,’ the ad continues.

Puberty blocker ad put out by Planned Parenthood, which tells children that they can get puberty blockers to “put their puberty on hold” pic.twitter.com/yjHXpevEMk

The ad made it seem like puberty blockers were as harmless as Tylenol. I thought it might be worthwhile to look at the safety of these compounds since Planned Parenthood does not seem inclined to provide all the information.

Using my background in chemical safety assessment, I dived deep into the known health effects of the following compounds that Planned Parenthood explicitly cited:

To begin with, many “experts” say that these drugs are safe and the effects are irreversible. These statements come from the British Columbia Provincial Health Services Authority:

There are no known irreversible effects of puberty blockers.

If you decide to stop taking them, your body will go through puberty just the way it would have if you had not taken puberty blockers at all.

Puberty blockers are considered to be very safe overall.

The gonadotropins cause the maturation of the gonads. These organs then produce and release the sex hormones testosterone and estrogen from the testes and ovaries. Histrelin acetate and leuprolide acetate prevent the pituitary gland from creating gonadotropins.

I find it difficult to believe that the shrinking of organs, and effects like bone loss, are either “safe” or “irreversible.” Tweaking hormonal biochemistry in someone’s body on that scale is likely to affect blood pressure, sleep patterns, weight, and many other impacts. Just ask anyone who has experienced significant changes in their hormone levels via menopause!

Indeed, the BBC Woman’s Hour reported an important change to the UK National Health Services website section on gender dysphoria: the NHS no longer says that puberty blockers are “reversible.”

“Little is known about the long-term side effects of hormone or puberty blockers in children with gender dysphoria.

Although the Gender Identity Development Service (GIDS) advises this is a physically reversible treatment if stopped, it is not known what the psychological effects may be.

It’s also not known whether hormone blockers affect the development of the teenage brain or children’s bones. Side effects may also include hot flushes, fatigue and mood alterations.”

Let’s take a look at the chemicals themselves. The Safety Data Sheet for histrelin acetate indicates that it is a skin and respiratory sensitizer and is harmful if swallowed.

According to the European Chemicals Agency, leuprolide acetate is “harmful if inhaled, may cause an allergic skin reaction, and may cause allergy or asthma symptoms or breathing difficulties if inhaled.”

If these were in the chemical inventory of my client, I would classify them as “Particularly Hazardous Substances.” The safety program would have to ensure employees using these chemicals have additional training and enhanced hygiene measures.

Now, safety data sheets for workers handling these compounds. What does the pharmaceutical literature say about the side effects of these two puberty blockers when used as a treatment?

Leuprolide acetate also has its own array of side effects:

I strongly suspect a teen would prefer not to bring on a case of acne. And these are just some of the many potential health effects of both blockers.

One last note in today’s hot science take. I am versed in this issue because I have to identify endocrine-disrupting compounds for regulatory purposes. There is a big push to remove them from the environment. Therefore, their use in industry is being increasingly restricted.

Why are groups like Planned Parenthood making them seem as harmful as children’s aspirin?

Sure! Go ahead and give a confused adolescent an array of dangerous pharmaceuticals with a frightening array of horrible side effects. Teen years are just not crazy or challenging enough! We could cook up reality TV shows with real adolescents actually taking this witches brew. How exciting would it be to see all those side effects in real time with real teens?

Doubling down on insanity, while the bribers of the democrat party (and much of the GOP) meet in their 5-year Congress to plot the takeover of the world.

The fact of the matter is there are no scientific studies that address the use of so-called puberty blockers in children. Why? Because it would be unethical and immoral for a scientist to conduct such experiments on children. And they would never receive approval from an Institutional Review Board.

Well, not exactly. Lupron (leuprolide) has been studied quite extensively in children in the treatment of central precocious puberty (when the pituitary gland decides to begin the process of sexual maturation in childhood, before the rest of the child’s body can catch up). In those applications, it appears that when the drug is withdrawn (generally at a time when the child would otherwise be entering puberty) the resulting course of development is to all appearances normal. Histrelin, which is newer, has seen similar usage, but the studies are less robust.

What has NOT been studied systematically is the off-label use of the drugs in halting normal puberty in children with mental illness, or the consequences to those children if normal puberty is delayed. That usage and the long-term consequences are unknown. It’s not as if, prior to the “consensus” regarding “gender-affirming” care, anyone did that.

We’ll likely see a new “consensus” emerge. Probably it will move from “it’s totally reversible” to “it’s not reversible, but that’s fine”, and eventually “it was a catastrophe and how could anyone do that?” But it will take a while.

You skipped the third step of the dance, which is, “here’s why all those negative side-effects are a good thing.”

Oh yeah. I always forget that one. “Permanent sterility means you don’t ever have to pay for contraception! Win!”

I had a niece who started puberty around 8th birthday. Meetings with parents, doctors, physiotherapist, teachers etc. concluded that she wouldn’t be able to handle puberty and her growth would stop. Each month she had a shot at the hospital and heart, liver functions would be checked. Stopped treatment at 13. My niece died suddenly in her early 20s, cause unknown. Did the blockers cause or contribute to her death? We’ll never know. But I do know she needed the blockers. Early puberty would have caused many problems physical, emotional and mental. My niece and others like her need this. Adolescents not wanting to face growing up do not, they need counselling.

Leuprolide, aka Lupron. Used to treat prostate cancer. I know. I was, and effect, chemically castrated for two years. The stuff takes anywhere from six months to about five years to wear off after that. It is not pleasant.

All I can say is, I’m thankful you survived big bear. That’s fur shure.

Now, I have a bunch of other junk to deal with.

Be healthy. Be happy. Live long and makes lots of posts for me to read.

But at least you still have your junk.

Don’t worry, folks, someone will be along shortly to inform you how you’re all mistaken and these chemicals are totally safe and 100% natural to boot.

Or they’ll just try to get your site shut down, because wrongthink.

Good article! However, I think you mixed up “reversible” with “irreversible” in a couple of places.

So ivermectin and other methods of dealing with covid were banned, cancelled, and the proponents harasses for “misinformation.”

Here we have demonstrable misinformation, and the government is supporting it.

The Dems are really mucking up the country and our kids.

“The Dems are really mucking up the country and our kids.”

That is the mother of all understatements.

And the pedophiles rejoice….

HOW did it EVER get this far?

They are completely lying

Completely amd they know it!

The idea that a child can block his growth spurt and then — hey no worries, you’ll just have it later — seems absurd on its face. And they never even bothered to try this on pigs or mice first just to see?

Also this “you should be the one to choose” trope, as if it was some other person choosing for you instead of your own body developing according to its own evolved processes.

It may be God choosing for you or it might be godless nature, but either way it is your own inborn nature, and nothing to do with The Patriarchy.

Soporific Woke mom: “Robin is starting to talk and I’m worried that his or her biological processes might be forcing this language thing onto hymmer without hymmer really choosing it. Like what if when hymmer grows up heeshie wishes heeshie was mute. I feel like I should put hymmer on brain-development retardation drugs.”

Planned Parenthood may not be able to kill the unborn without limit, these days, but they can help mutilate them once they are born. Good times.

“Planned Parenthood” is just another euphemism for Satan, they have carried his water from the beginning.

We’d never hear a peep from them again.

The same people that won’t drink from a plastic bottle will put their kid on puberty blockers etc. because an 8 year old says he is a girl.