“Any time you put more money into the economy, prices tend to rise.” 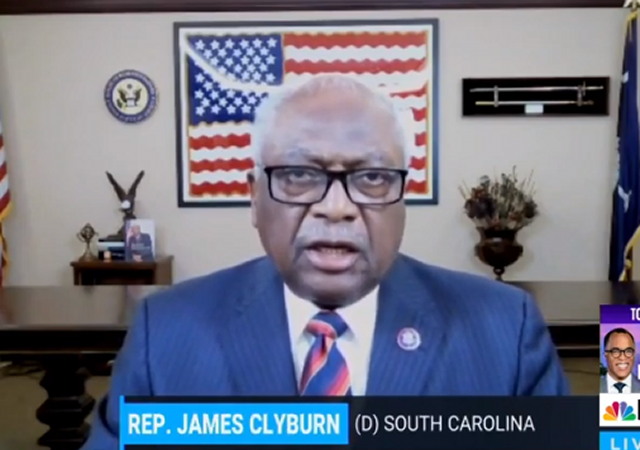 During an appearance on MSNBC this week, Rep. James Clyburn (D-SC) seemed to admit that Democrats knew that putting so much money into the economy through Biden’s recovery plan would cause inflation.

It’s a stunning admission, and it’s not clear that Clyburn knew how it would be interpreted.

Clyburn: We ‘Knew’ ‘Recovery Program’ Would Cause Inflation, ‘I Resent’ Those Who’d Rather Have Cheaper Gas than Jobs and Education

On Thursday’s broadcast of MSNBC’s “Jose Diaz-Balart Reports,” House Majority Whip Rep. James Clyburn (D-SC) stated that “all of us knew” prices would increase “when we put in place this recovery program. Any time you put more money into the economy, prices tend to rise.”

Clyburn also stated that President Joe Biden put kids back in school and has ensured schools are “getting fixed up for climate change” and said, “I resent people who feel that we would much rather not have jobs and education so long as we can pay ten cents less for a gallon of gasoline.”

Clyburn said, “Well, let me make it very clear, all of us are concerned about these rising costs. And all of us knew this would be the case when we put in place this recovery program. Any time you put more money into the economy, prices tend to rise. And we do know that price gouging takes place. … We knew that the moment we went to aid the Ukrainians, the Russians would do what they could possibly do to undercut this administration. So, they cut this deal with the OPEC nations to reduce the production of oil so as to drive the price of gasoline up.”

🚨 🚨 Clyburn says *every single* House Democrat knew their stimulus would cause record inflation and they did it anyway.

"All of us knew this would be the case… anytime you put more money into the economy, prices tend to rise."

Senate Republicans were quick to highlight this:

🚨WATCH: House Democrat Whip Jim Clyburn claims Democrats KNEW their wasteful spending would cause inflation — but they did it anyway. pic.twitter.com/ojiMf41MTj

Nick Arama of RedState says Republicans should run this clip on a constant loop from now to election day:

Dems Are Toast After Jim Clyburn’s Damaging Admission About Inflation

We’re now down in the final stretch of the midterms, and the top issue for Americans going into voting is — not surprisingly — the crushing inflation.

But now, House Majority Whip Jim Clyburn (D-SC) just made an admission that is going to do them in. He appeared on MSNBC on Thursday with José Díaz-Balart, who asked him about Americans’ concerns about the rising prices of everything. Republicans should run his response on a constant loop in every remaining ad between now and the election, particularly in battleground states. He admitted they knew all along rising prices would result from their “recovery” plan.

As long as their cut increases with inflation, it’s not a problem. /s

Trickle-down economics or redistributive change schemes, particularly with single/central/minority/monopolistic solutions, are primary forcings of progressive prices, recession, depression. and a general state of misalignment. Perhaps they can throw another witch, warlock… baby on the barbie to relieve our “burden”.

Rep. James Clyburn (D-SC): Living proof that the voters in his district have IQ’s 20 points below the national median.

He gave us Biden and he has no shame.

No great shock. Anybody with a room temp IQ knows that running the printing presses causes inflation. What shocks everybody is his admission.

Does this have to go down as the first honest remark by anyone connected to this administration?

Obviously, Clyburn got picked to be the sacrificial lamb to take the heat off the Dem mid-term candidates.

Wonder what he got in return?

How does that take any heat off the incumbent d/prog who voted for it or the d/prog candidates who have failed to condemn it?

Because it becomes an “asked and answered” to the media (and most Dem voters). No need to bring it up again by asking tough questions to current Dem candidates.

That is, in fairness, a common tactic of DC and does mostly work exactly as you describe. I don’t believe that works for a Nationwide problem hitting every household. Too much of an actual impact v some side scandal.

Of course the Biden WH knew they would be creating high inflation with their war on petroleum production & big spending. Inflation is always a deliberate policy decision by Govt and is the chief way all governments swindle their population for various political ends.

They can’t come in with a “save” for their voting base if the economy is strong.

Inflation saved jobs? 10 cents more for a gallon of gas? Cause and effect are foreign to them. The Russians never undercut the administration… this was self-inflicted.

Wasn’t it Ben Franklin who said, “They that give up essential fuel availability for a little temporary job and a poor government education will receive none of this bargain?”

Plus, with Biden offering “sweet deals” like “drill some oil or I’ll come after you with a haymaker” they think they can save on the govt side.

“Sales tax revenue just got itself a nice 10% boost.”
Of course, the additional money they get is worth 10% less, just like ours is. Wash.

Of course some of today’s lower value dollars go to pay principal and interest on govt debt. These dollars are worth less than they were at the time the obligations were created. So the govt debt holders are in essence getting back less money in terms of value.

What is that flag behind him on the wall? It looks knit or something.

All conservatives and Republicans should remember this statement and circulate this video .This is the Democratic agenda with no apologies whatsoever Gas and good prices can skyrocket as long as more money is spent on woke programs such as education and infrastructure