Supply chain issues, a global sugar shortage, and inflation combine to make a Halloween dark, full of terror, and devoid of treats. 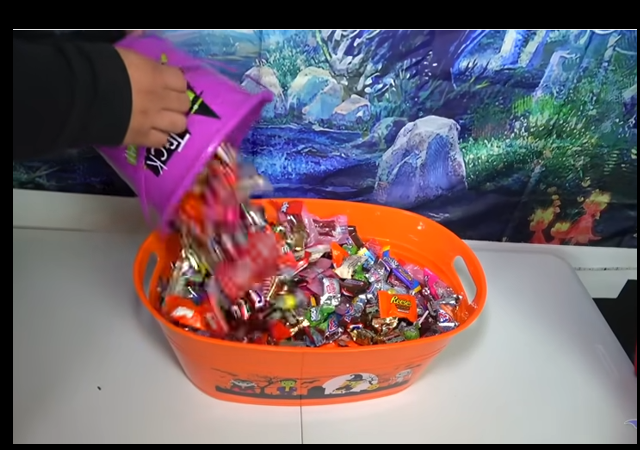 Autumn has begun, lawns are being decorated, and both the young and young-at-heart are deciding on this year’s Halloween costume.

Unfortunately for trick-or-treaters, the bags may not get as full this year as they have in the past, thanks to supply chain issues and inflation.

A potential candy shortage is looming this Halloween.

Aaron Lawry is an assistant professor of consumer science at Purdue University. He explains that the pandemic has hampered candy producers, such as Hershey’s, due to a sharp increase in demand. This can also coincide with continued supply chain issues and rising inflation.

Supply chains for candy are a lot more complicated than you’d realize. So, it is true that the candy is ultimately made in a factory somewhere in the middle of America,” Lawry said. “But, the ingredients come from all over the world; the milk fat, the palm oil, the cacao. Everywhere from Latin America to New Zealand is kind of contributing to the ingredients from within that candy.”

A potential factor in shortages of treats that may carry over into the Halloween season is a sugar shortage. According to the International Sugar Organization (ISO), there’s currently a global sugar deficit of 200,000 metric tons.

Raw sugar peaked at US$20.42 cents in November last year which was its highest in about four and a half years.

He further advised “for the short term we are okay, but we are trying our best to mitigate the medium-term risk.”

Part of this sugar supply chain problem can be attributed to Brazil, which is recognized as the largest producer of cane sugar. The nation cancelled some of its sugar export contracts earlier this year and focused on ethanol production instead to benefit from rising energy prices.

Commodities trader Louis Dreyfus projected on Wednesday that Brazilian mills will divert a larger-than-expected amount of sugarcane to ethanol production due to high energy prices, causing a reduction in global sugar supplies.

Dreyfus sugar director Enrico Biancheri said during the Citi ISO Datagro sugar conference in New York that Brazil’s center-south (CS) mills would produce only 29 million tonnes of sugar in the new season that started in April, a view that would be in the low end of analysts’ estimates so far.

“At current prices the world is heading to a shortage of sugar, due to a ethanol-oriented crop in Brazil,” Biancheri said, adding that sugar prices will need to rise to a premium over ethanol prices to cause an increase in sugar production.

In terms of inflation, prices are already spiking . . . or product size is shrinking.

The overall price of candy saw a 2% spike from July to August this year, with some candy brands hiking their prices higher than others, reports The Takeout. Hershey’s chocolates are 14% costlier than usual, Mars increased the prices of its candies by 7%, and Nestle’s prices rose by 9.8% over the last few months. Due to these rising prices, chocolate sales have seen a 1.5% dip since 2021.

Not all candy makers are responding to inflation by hiking prices, however. Representatives from Hershey’s and Mondelez told Reuters that in order to satisfy shoppers’ desire for lower prices, the chocolate makers have resorted to shrinkflation, or reducing product volumes while keeping costs level. So while shoppers may find their Cadbury chocolate bars to cost the same as they did in previous years, they may also notice a lighter-weight treat.

Between green energy idiocy and inflationary fiscal policy, this Halloween may be dark, full of terror, and devoid of treats.

Odd. I’m seeing candy all over the place in South Florida. Even Lowe’s was selling it. The prices are higher however but the prices of everything edible is higher.

Well, when you turn food into “acceptable” fuels, what can you expect?

Ruin the fuel and subsidize the low range electrics.

I think they are trying to limit our travel independence…

If my local WallyMart is any example, there is no shortage. I never saw so much candy stacked in the aisles as this year. Enough to make every kid in town at least sick, if not diabetic!
Yeah, I picked up a bag of Reese’s. But just the little ones.

The ones made from monkey meat? Rhesus Pieces?

A fun surprise in every pox!

You got some Snickers out of that.

A good candy for bears:
Grrrrr-adelli.

I live out in the country on a gravel road (I love the privacy), so I never get any trick or treaters. But I don’t find the price of candy concerning, and I doubt very many people do. I just got my house insurance bill, That is concerning. Plus the price of fuel, gas, property taxes, beef, health insurance, dental insurance, and the loss in my IRAs, annuities, and savings. Excuse me again, but I am NOT concerned about the higher prices of Halloween candy. Can we move on to something more serious? Please?

President Biden expresses no concern over your stated issues, so we need to find something else. /s

I am a bit concerned about some reports of fentanyl looking like or making its way into candy.

Hey, there’s no issue that you can’t make funner by politicizing it.

This year I plan to offer two trays and offer the kiddies a choice. One will have “earth-friendly natural candies” (prickly pear pods), the other will have “petroleum-based candies” (common bagged candies).

Halloween should be fun for adults, too.

Leslie Eastman — I really like your posts on LI. But the price of butter or of Halloween candy is not a high priority. You can do much better.

Personally, I think these posts are important to focus on all the issues related to supply chains, inflation, market issues, and the economy.

It is of concern to families with children who expect a traditional Trick or Treat experience. When my children were young Halloween candy was a budgeted expense.

It’s just one more nail in the coffin.

I just got my home insurance bill and it’s up 30% over last year. Everything is up and up substantially as near as I can tell

Candy went up? If ice cream went up, it would be an emergency.

supply side issues tied with inflation caused a case of grease (I need -40 to 300F temp ranges for tractor/snowblower) to double in price. so what used to cost me 65-70 now costs 120$

just pass the increase on to your clientele
like everyone else does
that way uncle sammy can tax your “higher” profits at a higher rate passing your money on to the invading migrants attracting more of them
it’s not a vicious circle; just straight-line socialism

It’s probably just the pedophile-in-chief buying up all of the candy to attract potential dates.

Just another hype and hysteria story without basis only what might happen and speculation. There is plenty of candy in all the store including Dollar General, WalMart and the like. The thing is that the prices have risen.

Oh come on. There’s no “candy shortage.” Prices are way up, but that’s true of everything. Shelves are stocked with plenty of the candy.

One of the dollar store chains had a peanut butter type taffy I’m fond of. So, of course, it’s no longer offered.

The candy shortage I see happens AFTER I bring it home. I have to buy it right before Halloween or it disappears. (yes–it is me eating it too.)

I bought a pretty good size amount my first year in one of my houses. I had three kids show up. I took the rest to work.

I got a good bit of advice from a friend of mine. He said, ‘Bear, you live alone, and stay to yourself. Perfect fodder for the gossip mill. One kid gets sick on tampered candy, and the eyes are on YOU!” I don’t know if they still have them but Micky D’s used to sell coupons you could give out, each good for a small portion of French fries. I started giving those out.

My local CostCo has skids of candy