“An ad for candidate J.D. Vance portrays Tim Ryan as in lockstep with House Speaker Nancy Pelosi, … Although the Democrats’ voting records are fairly aligned, the clip leaves out Ryan’s bid against her in 2016.” – PolitiFact 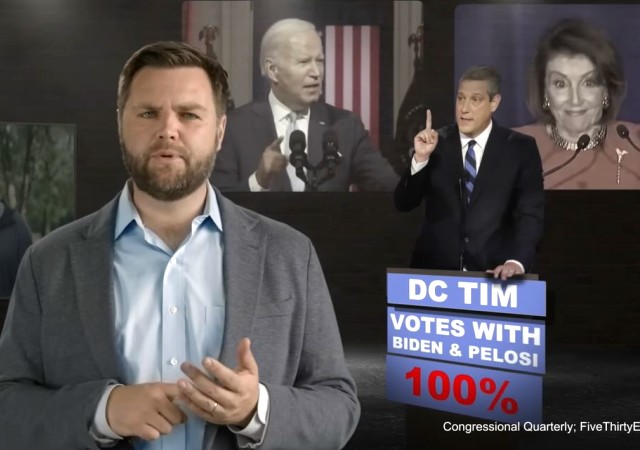 Just about every time I read a “fact check” from PolitiFact, I think to myself “this truly might be their most ridiculous one ever.”

But unlike those others I’ve checked out, a recent one they did on a campaign ad Ohio Republican Senate nominee J.D. Vance ran criticizing his Democratic opponent Tim Ryan really might be the most ridiculous they’ve ever done, and I promise I’m not being hyperbolic.

Let’s take a look at the ad first before diving into the “meat” of PolitiFact’s argument.

In it, we see Vance correctly pointing out that Congressman Ryan has two faces: the fake “independent” one he puts on for Ohio voters while performing his “man of the people” shtick and the career politician one he puts on when he’s in Washington, D.C., where he votes with House Speaker Nancy Pelosi (D-Calif.) and President Biden 100 percent of the time. Included in the clip is a short segment between Ryan and MSNBC host Rachel Maddow from 2016 where he discusses his “love” for Pelosi:

TV Tim is a fake. DC Tim is bad for Ohio. pic.twitter.com/IdUu6mfdhG

As per the norm, PolitiFact tried to run interference for Ryan, suggesting Vance’s ad didn’t tell the full story because in 2016 after Donald Trump defeated Hillary Clinton, Ryan challenged Pelosi’s leadership position at the time (House Minority Leader), as though that changed the facts presented in the ad:

An ad for candidate J.D. Vance portrays Tim Ryan as in lockstep with House Speaker Nancy Pelosi, playing a clip of Ryan saying “I do love her.” Although the Democrats’ voting records are fairly aligned, the clip leaves out Ryan’s bid against her in 2016. https://t.co/oRbBicL8Ms

In their write-up, they called the omission of Ryan’s failed attempt at becoming House Minority Leader an “important” one:

The clip omits an important “but;” Ryan went on to say that despite his love, it was time for a new Democratic leader in the U.S. House — Ryan himself. The clip was from 2016, when Pelosi was vying to remain the House minority leader after Trump’s presidential win.

Although Ryan votes with Pelosi’s priorities most of the time, he has disagreed with her on some topics.

So what? A leadership challenge doesn’t necessarily mean you disagree with the person in charge as far as their priorities go. In fact, in Ryan’s case he admitted in that interview with Maddow that his issue with Pelosi was in the way she went about trying to sell the Democratic agenda and win seats and not the agenda itself:

And we need a leader who can go into all of those districts and persuade people who voted for Donald Trump to come back into the Democratic fold. And I believe — I think I can do that. I know I can do that. I`ve been doing it my whole career and I just want to offer the members of our caucus an opportunity to have a choice in this.

PolitiFact went on to rate Vance’s claim as “half true,” even though they acknowledged that he was right about voting with Pelosi and Biden 100% of the time — i.e. the entire point of Vance’s ad:

Ryan’s voting record does show alignment with the priorities of President Joe Biden and Pelosi.

FiveThirtyEight, a website that analyzes data, including lawmakers’ records, found that Ryan voted with Biden 100% during the current Congress. That is not unusual for House Democrats; Rep. Alexandria Ocasio-Cortez, D-N.Y., a member of the party’s progressive wing, voted with Biden about 94% of the time.

ProPublica, an investigative news outlet, analyzed major votes by lawmakers and found Ryan voted with Pelosi 100% in the current Congress and the previous Congress.

So just how on earth can they rate Vance’s claim about Ryan “half true” when they acknowledged in what they wrote that what he said was correct? Because it’s PolitiFact, that’s why, where covering for Democrats is the name of the game, as we saw in their “fact check” on Republican critics of Vice President Kamala Harris’ disturbing hurricane relief “equity” comments.

The same holds true for another one they did earlier this week on a post-Hurricane Ian statement from Florida Gov. Ron DeSantis in which he said Lee County wasn’t “even in the cone” three days prior to the storm hitting the southwestern coast. Newsbusters dissected and took down that PolitiFact hit piece masquerading as a “fact check” here.

Needless to say, though fact checkers have demonstrated over and over again over the years that they can’t be trusted, they especially did not cover themselves in glory this past week with their horribly slanted takes on Republican claims with just a few weeks to go before the midterm elections.

It is precisely because I think fact-checking is so important these days, that I loathe PolitiFact. Its bad faith partisan hackery has delegitimized the entire concept of fact checking. They are just a self-parody at this point and no one should take them seriously. https://t.co/priE5AWYHd

As the old saying goes, truer words were never spoken.

So Politifact is a Kool-Aid dispensary for shook up Dems?

Actually, Politi”fact” and the rest are best at beshating themselves.

I hope Vance runs with this.

Is McConnell supporting him, or is he doing another “Nevada” job?

Made me think of that Achilles cartoon above….

Here’s a clue. They call themselves “Politifact,” not facts. Their name is a confession that they’re a hack propaganda machine.

I remember the first time I ran into the concept of “fact checking.” I was 19, watching the premiere of “Silent Running.” The scene where Bruce Dern and his (crewmates or drones, I don’t recall) were watching a political debate on the TV in their ship, and as the politicians spoke, a robot was affirming or rebutting the truth of each statement in real-time voiceovers. All my acquaintances thought this was the neatest thing ever, an end to political lies forever. I sat there thinking it was the worst idea ever, because you should never trust whoever ran the robot.

Fact checking doesn’t solve the problem of lies… it just kicks the can down the road a little further.

Manipulation by means of coercion, deceptin, power nudges and deliberate lies to change outcome of elctions has been perfected and used for sometime now.

“Pretzel Logic” was one of Steely Dan’s best albums.

Speaking of “Pretzel Logic” I have a robot vacuum cleaner that’s supposed to have fuzzy logic, but when you follow its path on the carpet it traces the form of a pretzel. I suspect it’s listening to Steely Dan’s album.

The editor of my high school paper, when I was a feature writer, is now a senior reporter at the LA Times. He was their media critic for awhile.

Before he defriended me on Facebook I remember him advocating for all his followers to follow PolitiFact.

Fact checking is one of the biggest scams in an industry rife with scams.

And only checks Dems; note how they all dropped off the radar when President Trump was usurped.

Politi”fact” is pretty much the clean up crew.

Sadly their base will be joyously licking each others privates while believing it all.