“Even before John Fetterman became the Democratic nominee for Pennsylvania’s open U.S. Senate seat — one of the pivotal few that could flip from Republican control — he had attained folkloric stature.” 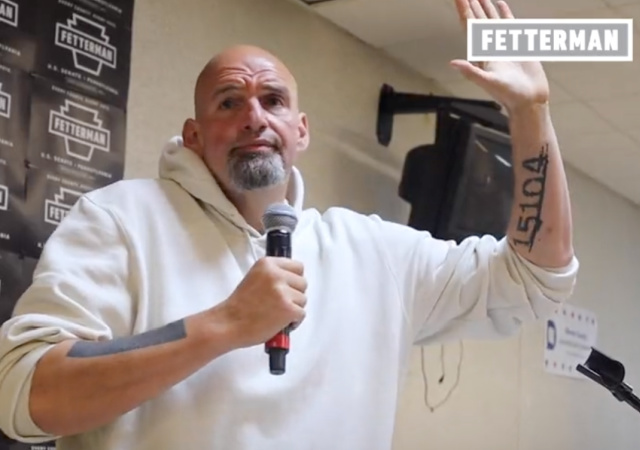 If there’s one thing Democrats can always count on at election time, it’s the media coming to the rescue with a glossy magazine cover story that reads like it was written by the candidate’s PR team.

The Vulnerability of John Fetterman

Even before John Fetterman became the Democratic nominee for Pennsylvania’s open U.S. Senate seat — one of the pivotal few that could flip from Republican control — he had attained folkloric stature. He was six-foot-eight, bald, bearded, and almost always in a hoodie. He had a Harvard postgraduate degree and a home in a converted auto dealership across from a steel mill in Braddock, the struggling former steel town in western Pennsylvania where he had been mayor from 2006 to 2019.

An enormous white man who had played offensive tackle in college and appeared to be built of all the XXL parts at the Guy Factory, Fetterman made arguments for a higher minimum wage and prison reform and abortion access and legalizing weed at a frequency that could be heard by Rust Belt voters, and he had been regularly reelected mayor of his majority-Black town before becoming lieutenant governor. He was a Democrat who defied the right-wing caricatures of the contemporary left as elite, effete, and out of touch because he was self-evidently none of those things.

Political reporters were gobsmacked; they’d never seen anyone like him before. Sure, on some level, he was exactly the same as every other senator in Pennsylvania history, a white man. But he wore shorts in January!

The Twitter promotion of the article is even cringier:

.@JohnFetterman is trying to flip Pennsylvania’s open Senate seat while fending off a celebrity doctor and recovering from a stroke that almost killed him. @rtraister reports https://t.co/Xt5xBoEok3 pic.twitter.com/4I68ZMl1gd

Even before Fetterman became the Democratic nominee for the seat — one of the pivotal few in the Senate that could flip from Republican control — he had attained folkloric stature https://t.co/Xt5xBoEok3

Fetterman defied the right-wing caricatures of the contemporary left as elite, effete, and out of touch because he was self-evidently none of those things https://t.co/Xt5xBoWxyb

It’s not exactly that Fetterman was what the Democratic party wanted, but he was perhaps what they needed: the unicorn who could persuasively pitch policies that would make voters’ lives materially better, while conveying that he was one of them https://t.co/Xt5xBoEok3

The article even cites Media Matters:

Media Matters reported that in September the Fox News primetime lineup mentioned Fetterman more than any other candidate, including those in other hotly contested Senate battles, a metric that illustrates how scared Republicans are about losing this race https://t.co/Xt5xBoEok3

Earlier in this thread for a piece that is blatant PR, NY Magazine refers to the Pennsylvania Senate race as the one with the highest stakes… before criticizing Fox News for covering it more than other races. 31 flavors of stupid. And citing Meda Matters is never a good look… https://t.co/ms3NZPSc5x

Nothing says “Working Class Pennsylvanian” like a story in one of the most elitist publications in the country. https://t.co/2mwORH1Tpb

The reason for this article is obvious. Oz is closing in on Fetterman, and the media is worried.

Recently, his months on the road have started to pay off. With just one month to go before Election Day on Nov. 8, in one of the most important seats in the country, this race is now a squeaker. The most recent RealClearPolitics polling average shows Fetterman’s once-massive lead over Oz has shrunk to a statistical tie, and the Cook Political Report is now calling the race a toss-up.

Sitting on a worn couch in a Philadelphia banquet hall, Oz is dressed in a navy suit and appears to be calm under pressure. He insists that his trip from the bottom of the polls to a near tie hasn’t rattled him.

“It really humbles you,” he said, “when you meet people in their backyards, or on their farms, or in their neighborhoods and hear them talk about the things their communities need and how deeply it concerns them when those needs aren’t met. And it also has energized me. These conversations remind me how important it is to serve people’s needs, to really listen, and stay connected to them — and not Washington — if I am elected to the Senate.”

While Oz was busy building relationships with voters, Fetterman built his following on Twitter. He mocked Oz for where he used to live (New Jersey), for what kind of shoes he supposedly wears (Gucci loafers), for calling a veggie tray “crudité.” Snooki from MTV’s “Jersey Shore” was even enlisted to tease Oz.

This is one of the races to watch in November. It’s more competitive than Democrats expected it to be, and if Oz pulls out a win, the meltdown on the left will be epic.

It is funny how journalism used to mean afflicting the comfortable and comforting the afflicted to the propaganda arm of the DNC.

I am barely old enough to remember that.

Those dims sure do like them some brain-scrambled, demented idiots.

A top election official in Pennsylvania says the state will disregard the U.S. Supreme Court’s guidance on counting mail-in ballots arriving in envelopes with typos or incorrect dates, saying that the state’s Commonwealth Court has already established the practice as licit.
https://www.foxnews.com/politics/pennsylvania-count-undated-ballots-election-official-says-despite-us-supreme-court-ruling
Destroying Democracy

Could Fetterman’s very name be a warning to black folk? Remember Biden warning about putting you all back in chains? Fetterman held a black jogger at gun point. A fetter is a chain or a manacle. What could constitute a clearer warning? I fear for my black brothers and sisters. This 6’8, chain-wielding, shotgun toting, present day slaver is coming for you all.

“and he had been regularly reelected mayor of his majority-Black town”
Remember when carpetbaggers used to be Republicans?
That was way back before Senator Hillary.

Fetterman’s public persona is a total fraud. He’s a fat lay-about that sponged off his parents until his mid-40s, yet portrays himself as a hardworking, union man.

What’s up with the number on his arm? Is it his zip code so if he gets lost, the postman can send him home?

It’s a reminder of the number of times per day he needs to pat the head of the creature attached to him so it feels comforted and doesn’t explode out of his neck in anger.

His head lump make me keep thinking of the conjoined twin in the movie “Basketcase.”

Looks like prison tats. Does he have a record?

No, the tats are part of his invented legend. They go along with his supposed union connections, which don’t exist.

Oh, and his part-time gig as ‘mayor’ of the wreckage of a small, post-industrial town, being paid $150 per month to do nothing.

He keeps his off-shore bank account number on his arm so he won’t lose it.

It’s the number he has to type into his home computer every 108 minutes, or Brandon dies.

The only way to rescue Fetterman is to:

1. Remove that horrible lump from his neck

3. And put him on life support until brain transplants become medically feasible

What is that giant lump? A goiter?

It’s the stump where the second head was removed.

“1. Remove that horrible lump from his neck”
*****
With all of the on-line comments about the “lump” on his neck, I surprised that he hasn’t addressed the issue. IIRC, shortly after his Cerebellar stroke, he had an emergency decompressive sub-occipital craniectomy, where neurosurgeon removed part of his skull to decrease pressure on his brain. I think the mysterious “lump” is the area where the skull bone is missing. In the big picture of his obvious significant residual loss of cognitive function, the lump is trivial.

But it is a constant reminder, and, yes, it should have been addressed instead of hidden under a hoodie.

Fetterman just had an interview in which he claims he is fit to be a Senator. But due to his stroke, he had to read the questions and answers off a gigantic tv screen—otherwise he would’ve been totally helpless.

He has a point. I suppose that someone with the mental capactiy of the President should be able to handle the duties of a Senator just Jim Dandy.

I like the crap about the “Harvard degree” … It’s in “public policy” – a total joke. But it’s funny that they are trying to sell the retard as a “Hah-vahd man”, now.

It may be a joke now, but it wasn’t when I got mine (albeit from a different school)

Without the media doing all their PR and campaigning for them, the Democrats would never win a majority.

Funny how the slavish propagandists at New York mag left out the part about Fetterman holding a black man at bay with a shotgun, with no legal justification., in their nauseating hagiography of this ne’er-do-well idiot. That little bit of unpleasant history can’t be part of the Narrative (TM).

Fetterman is physiologically and ideologically unsuited to hold public office.

If Oz weren’t Muslim he’d be leading by 10 points.

And if he didn’t maintain a dual Turkish citizenship (puzzling since he was born in Cleveland) he’d be ahead by 15.

I wish Fetterman well in his recovery. He’s too young for something like that to happen to him, but US senators should comport themselves better. I won’t be sorry if and when he loses.

Why is it puzzling that he has dual citizenship? Millions of Americans do. Or are you puzzled why he chooses to keep it? That’s easy too; why throw away something that might come in useful one day? Not only does it get you into that country without a visa, and let you work there, it can get you in to some other countries without a visa, where US citizens require one.

I live in Pennsylvania and quite frankly never even heard of Fetterman or his ‘folkloric’ stature before he ran for US Senate.

“Folkloric” equals “mythical” in this case.

Does anyone remember Kim, Il-sung, the North Korean dictator who was the current NK dictator Kim’s granddaddy? He also had a growth on the back of his neck that I’ve never heard an explanation for (South Korean newspapers called it a “tumor”).

grew-up in a family of physicians–have long experience with medicine men / women–am impressed by oz’s seeming lack of the requisite “god complex” so common in the profession (particularly in shrinks and specialty surgeons)–he has the quality of being approachable, of being relatable, of being a genuine “listener”–obviously competent in his calling and established in the world–serious and engaged–his faith is his own business (as is ours)

his opponent is a near-polar opposite–the contrast between them is stark and immediate–why on earth someone like fetterman could even be considered a serious contender for the us senate says a lot about the voters in their state–to me, regardless of ancillary issues, the choice for such an important post is obvious

Should have saved it as linked it a few places, on a Bad Blue Dr Oz video during a town hall explaining his mother in bad health still lives in Turkey so does travel back and forth often. And said he wins he would dump the duel citizen.
So fine for me, Fetterman has to be stopped.

And what is the big number tats on his arm for? Never seen any like it