No, Media. DeSantis Eased Voting Rules for Three Counties Hit Hardest by Hurricane Ian Because They Asked, Not Because They’re Republican

No, Media. DeSantis Eased Voting Rules for Three Counties Hit Hardest by Hurricane Ian Because They Asked, Not Because They’re Republican

The other impacted counties said they did not need help or extra provisions. But narrative, you guys. 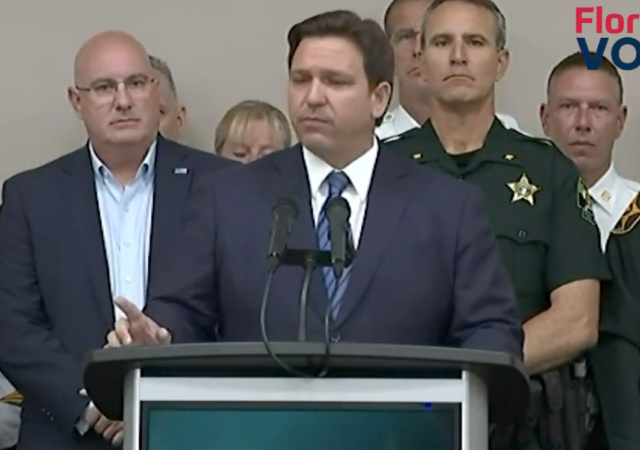 Oh, look. The mainstream media buried vital information to attack Florida Gov. Ron DeSantis. You see, he eased voting rules for three counties hit hardest by Hurricane Ian that asked for help. The counties just happen to lean Republican. The counties that lean Democrat said they would be just fine for the November election.

But Narrative > Everything else.

The Washington Post‘s Lori Rozsa got the ball rolling with her piece, DeSantis changes voting rules for some counties hit by Ian, sparking criticism:

More than 1 million voters in Charlotte, Sarasota and Lee counties will have more time to get to the polls for early voting in the upcoming general election and will have more ways to file a mail-in ballot under the order the Republican governor signed Wednesday.

Some of the accommodations being offered run counter to recently enacted voting laws pushed by DeSantis and passed by the GOP-led state legislature. Among those laws is one that limits drop boxes, called “ballot intake stations” in the law.

Under the order, elections supervisors in the three counties can set up new early-voting and drop-box sites. Vote-by-mail ballots can also be sent to an address other than where the voter is registered.

“Tens of thousands of Floridians have been displaced, and today’s executive order fails to meet the moment and ensure voting access for all Florida voters,” Jasmine Burney-Clark, founder of the voter rights organization Equal Ground, said in a statement. “Instead, Governor DeSantis is politicizing a natural disaster.”

The Guardian‘s Gloria Oladipo regurgitated Rozsa’s piece. This is the one that received a lot of attention on social media.

Charlotte, Lee, and Sarasota are the only counties that made requests to the government. The other counties said they are okay with the November 8 election.

Thanks for showing your bias, guys. It never gets old.

You can tell these guys only read the headline, didn’t read enough to reach the buried lede or flat-out ignored it when they read the truth.

Nothing to see here… move along.

It should surprise no one that @RonDeSantisFL, after failing the people of Lee and neighboring counties by not pushing for an evacuation in time to save their lives & homes from hurricane Ian is now piecing through the map, making post-disaster voting easier ONLY for Republicans. https://t.co/FOsaaPAvnC

Why are we not surprised? @RonDeSantisFL only cares about one thing — himself.https://t.co/vzgcyG8kyD

“Voting rights groups had previously asked the governor to extend the statewide voting registration deadline…DeSantis complied – but only for the three Republican counties.”

So much for all that whining about “voter fraud”.
https://t.co/kepVH9YAoj

My goodness, this is not hard. If the Democratic counties asked for help and provisions, then DeSantis would grant their requests.s

I wish the officials in the counties would push back against the media and the voting rights groups. Then again, I know the officials have a lot on their hands right now.

Plus, even if they did, the media would not listen because it doesn’t fit with their narrative. It’s all about the narrative that Republicans don’t care about anyone and DeSantis is evil.

Bryan Griffin, DeSantis’s press secretary, has a handy list for Rozsa and other reporters who twisted the story to fit their narrative.

Supervisors outside of these three counties made no such requests and, in fact, have made statements about their readiness for the election (including Collier, Volusia, Osceola, Manatee, and Orange). This is easily and publicly verifiable.

“I don’t expect any issues” with the election, Bennett said.

“We have nine early voting sites. They are good.”

“We’re going to be open for voting,” said Lewis. “Don’t you worry about that.”

“With Hurricane Ian in mind, elections officials have checked early voting and election day precinct locations near areas that have sustained flooding. All were spared the worst of the storm.”

Can’t you be both?

I think you mean Pro-both and if so, the answer is yes. That doesn’t stop a certain faction from trying to push it like a competition.

Well it is isn’t it, when it comes to the 2024 Republican nomination for president. That’s the undercurrent that cannot be ignored.

Strange, don’t the communists usually complain that they want it to be easier to vote?

Yes, this is a nice turnabout. They only wanted it to help them. DeSantis is very good in turning things around like that, which is satisfying.

They’re trying for the perennial “Republicans are hypocrites” angle.
They’ve decided to go ahead and start prepping the battlespace for the post-election “Republicans cheated to win” narrative, and the ‘hypocrisy’ is the first step in that.

They complain that they want it to be easier to vote for everyone. If their claim were true, and de Santis were truly only making voting easier for people likely to vote for him while not doing so for those likelier to vote against him, then that would be wrong and they’d be right to complain. The problem with their complaint isn’t that it’s inconsistent with their previous positions, it’s that it’s just not true.

I live in Naples, FL. All anyone sees are the endless pics of the barrier islands. Tragic and devastating. However, for the rest of the hard hit areas, it was the usual roofs, windows, trees down, localized flooding that we deal with every hurricane. The three counties that asked for help with voting issues were the hardest hit. Outside of those counties it was just not a big deal. Here in Collier county it was the coastal areas that were subjected to storm surge. 97% of the rest of the county had minimal damage. Hence no need for any voting variance.

52 of the 67 counties in Florida “just happen to lean Republican”. As does the state as a whole.

The ‘journalists’ are also doing their bang-up job of conflating two different things. The law limits the number of ballot drop-boxes; DeSantis is authorizing new locations – which does not necessarily correspond to “more”. This isn’t about making it willy-nilly out-of-control drop anything anywhere – it’s about “Your drop-box location blew away? OK, where are you wanting to put the new one up?” and “Your polling place is still underwater? Yikes. Do you have somewhere safe to move it to?”

The one thing I would be interested in (based on the ’emergency changes’ made for Wuhan Flu) is whether the law gives DeSantis the authority to do what he did. I’m betting it does, but I never trust “emergency powers” in anyone’s hands.

I think it’s a wonderful precedent. DeSantis must be investigated!