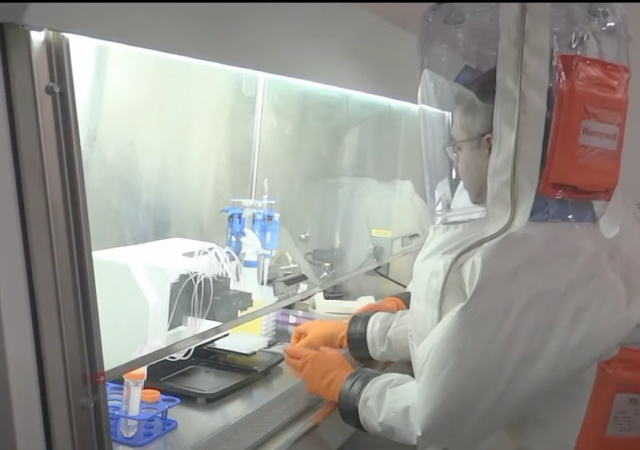 Earlier this week, my colleague Mary Chastain reviewed an exclusive by the UK Daily Mail, which asserted that researchers at Boston University created a Franken-Covid strain using the Omicron spike protein (which makes attaching to lungs easier for the virus) with a “wild type” covid virus.

The article indicated that research resulted in a pathogen that killed 80% of the mice tested in the experiments.

Not surprisingly, given that we are still dealing with the after-effects of the pandemic and its many response failures, people were outraged and upset by this news. Now, the National Institutes of Health (NIH) is examining whether Boston University’s experiments should have triggered a federal review.

Federal health authorities say they are looking into whether the scientists should have sought their permission before undertaking research that could lead to a “gain of function” in the virus gaining new or enhanced abilities, which can be “inherently risky.”

And locally, a spokesperson for the Boston Public Health Commission says it is now reviewing application materials from the study’s scientists “to confirm that the research was conducted in conformity with protocols, and that they were properly overseen.”

The commission approved a proposed research protocol submitted by the scientists in March 2020, the spokesperson said.

However, Boston University says its research followed “all required regulatory obligations and protocols” to safely experiment with the viruses.

“First, this research is not gain-of-function research, meaning it did not amplify the Washington state SARS-CoV-2 virus strain or make it more dangerous. In fact, this research made the virus replicate less dangerous.”

Corley says the line pulled out of context actually had nothing to do with the virus’ effect on humans. The study began in a tissue culture, then moved to an animal model.

“The animal model that was used was a particular type of mouse that is highly susceptible, and 80 to 100 percent of the infected mice succumb to disease from the original strain, the so-called Washington strain,” says Corley. “Whereas Omicron causes a very mild disease in these animals.”

That 80 percent number is what the media reports latched onto, misrepresenting the study and its goals.

“The Boston Public Health Commission also approved the research. Furthermore, this research mirrors and reinforces the findings of other, similar research performed by other organizations, including the FDA. Ultimately, this research will provide a public benefit by leading to better, targeted therapeutic interventions to help fight against future pandemics.”

A public records check shows the research was partly paid for using a grant awarded by the National Institute of Allergy and Infectious Diseases (NIAID), one of the federal government’s primary research agencies. Typically, as part of any Government-funded research grants, researchers review how the money will be spent and how it will benefit the public.

However, Dr. Emily Erbelding, director of NIAID’s division of microbiology and infectious diseases, said the Boston team did not clear the work with the agency. Boston University researchers counter they were not obliged to do so.

Dr Erbelding said she ‘wished’ the scientists had informed NIAID of their work.

She told Stat News: ‘What we would have wanted to do is to talk about exactly what they wanted to do in advance… [and then] we could have put a package forward for review.’

A spokesman for Boston University today told DailyMail.com they ‘did not have an obligation to disclose this research’.

They said the experiments were carried out with funds from Boston University.

‘NIAID funding was acknowledged as a courtesy because it was used to help develop the tools and platforms that were used in this research, they did not fund this research directly,’ they said.

Unfortunately, I do not think our current batch of “experts” is up to the task of adequately assessing risks, correcting and evaluating research priorities, and fully appreciating the concerns of the non-scientific population who are impacted adversely by their “findings” (also, see “climate change”).

I also don’t think our scientists begin preparation for their experiments by asking an essential question and honestly answering it: Should you do this experiment?

Covid has been a warning shot across our bow. Hopefully, the warning will be heeded.

To extend the Jurassic Park reference, “viruses will find a way.”

They are right that the virus they created doesn’t seem all that bad, as these mice are particularly susceptible. But making something similar in lethality to the original Wuhan Type and more contagious is still technically “gain of function”. Now they need to release it into the public in Boston to find out what it does (or doesn’t do) in the real world. I would suggest they infect themselves and then ride the T all day for a couple of days. There is also a major scientific conference coming up at the end of Nov in the Hynes Center, and they should send infected people into it. Particularly big fat ones who can spew huge clouds of virus.

They should also recombine MERS with the Omicron spike to see if they can make something really good, and if they can, use it in the Ukraine War against Russia.

WHERE are the Board of Regents? Why aren’t they all over this?

Who?? Why would they care?

Because of the bad publicity and the potential civil liability from an outbreak. And, just because they are the final authority on Campus.

What is the big deal here? An 80% mortality rate would be a huuuuge benefit to the Climate Change efforts. Also, if we could kill off most of the rats and mice, that would help with our food supplies and pending starvation. /s

If nothing else, this will give Pfizer the excuse to come up with another “vaccine”.

If their work made the virus more infectious, yeah…it’s gain of function unless the NIH has redefined it to mean something else entirely (to cover their own asses).

The NIH latches on to creating a report about something people care about, ignoring the fact that nobody cares what the NIH reports say anymore.

“First, this research is not gain-of-function research, meaning it did not amplify the Washington state SARS-CoV-2 virus strain or make it more dangerous. In fact, this research made the virus replicate less dangerous.”

It’s like creating a new Black Plague that is 80% as strong as the original. The original did quite a bit of damage, and before you FAFOed, we had no remaining Black Plague (to speak of) at all.

Yeah, but the US population has lots of immunity now that didn’t exist in March 2020. T-cell immunity alone should prevent this new virus from being very significant. Of course, the only way to find out for sure is to release it into the city.

Once people start dropping dead in Boston it will be blamed on a wet market at Faneuil Hall.

In retrospect, Durgin Park is lucky they closed when they did.

The NIH is “investigating” this? The same NIH that made $125 billion, tax free, in one year on one vaccine? That profit was started on GOF that NIH funded. Now, they are funding GOF everywhere to get another cash windrow. They would only be making strategy as to do it all again.