“If it was about safety and public health, no one would be exempt. It is time for the City of New York to what is right and what is just.” 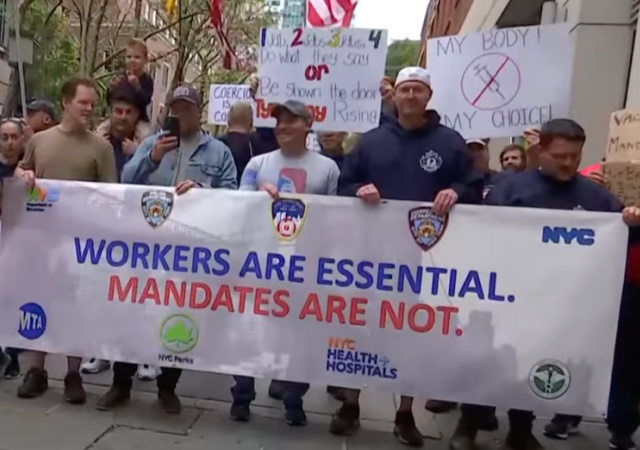 Sixteen fired employees from the Sanitation Department sued the city later in the month. Adams fired a total of 40 sanitation employees.

In October 2021, former Mayor Bill de Blasio mandated all public employees have the COVID vaccine. The health commissioner extended the mandate to the private sector in December.

When faced with problems of unvaccinated athletes, current Mayor Eric Adams “provided blanket exemptions from the private employers’ vaccine mandate for athletes, performers, and other artists.”

In other words, these Democratic leaders, obsessed with power, knew they had no backing or justification for forcing employees to get a shot. None.

Porzio saw right through them, especially Adams, when he made exemptions for the arts. Money, money, money.

Porzio was correct that Adams didn’t provide an example of why he made that exemption, but we all know it had to do with Brooklyn Nets player Kyrie Irving. In March 2022, Adams knew baseball season would start the following month. No Yankees or Mets players? Whatever. So he had to expand it to entertainers.

Capitalism. It’s a sweet thing, isn’t it? That’s not sarcasm. I love capitalism. I’m honest about it, unlike people on the left.

Porzio then pointed out that the NYC Department of Health and Mental Hygiene (DOHMH) and the Board of Health also overstepped their boundaries.

The NYC Charter gives DOHMH and the Board of Health “jurisdiction to regulate all matters affecting health in the City of New York.” They can also “add necessary additional provisions to the healthcode to most effectively prevent the spread of communicable disease…” The health code provides the two with additional powers during a public health emergency.

However, a citizen’s employment is not within those powers.

“Though the Board of Health has the power to regulate vaccinations and adopt measures to reduce the spread of infectious diseases per Administration Code 17-109, the Board of Health does not have the authority to unilaterally and indefinitely change the terms of employment for any agency,” wrote Porzio. “Therefore, this Court finds that the DOHMH has acted outside its proper sphere of authority.”

Porzio said then-Health Commissioner David Chokshi ordering and enforcing that vaccination policy on only a portion of the populace for an indefinite period of time is akin to legislating.

“It appears that in issuing this indefinite order, usurping the power of the legislature, the Health Commissioner has acted beyond his authority,” concluded Porzio.

Just like DOHMH and the Board of Health, Porzio found the Health Commissioner “exceeded his scope of authority based upon the separation of powers” since he “cannot enact a term of employment on City employees.”

I found this part interesting. Remember how people got upset because healthcare workers were fired for refusing the vaccine? Well, “healthcare workers have always been required to be vaccinated against infectious diseases.”

However, The City of New York Department of Sanitation has never required employees to have vaccines “against infectious diseases.”

Porzio also shot down the city’s argument that sanitation workers come into contact with unvaccinated people because, well, common sense.

But the best part: “City employees should also have the right to make their own choice regarding their own health.”

Let me fix that for you, Porzio: “City employees, along with every other consenting adult, have the right to make their own choice regarding their own health.”

In his conclusion, Porzio reminded NYC that the vaccine “does not prevent an individual from contracting or transmitting Covid-19.” Plus, the CDC guidelines for quarantine and isolation are the same for everyone regardless of vaccination status.

“President Joe Biden has said that the pandemic is over,” wrote Porzio. “The State of New York ended the Covid-19 state of emergency over a month ago.”

Boom: “If it was about safety and public health, no one would be exempt. It is time for the City of New York to what is right and what is just.”

Does this make legal precedence to go after the federal worker mandate now? I mean FJB made the jab mandatory for all federal workers except the postal workers, and USPS workers are civil service governed by OPM so that would seem to be in the same boat as what this ruling found?

No, it’s not even a precedent on the state level, it’s just the opinion of one judge, which will almost certainly be appealed immediately. It’s certainly not of any precedential value whatsoever on the federal level.

However it does provide good material for argument in other NY courts, courts in other states, and federal courts. Here is a person who is presumably learned in the law, who has examined the evidence and come to this conclusion; therefore, your honor, you should find this persuasive and come to a similar conclusion.

I don’t know why you got downvoted. This answer is precisely right. Trial court opinions are not precedent, but they can be persuasive.

Only speculation here, but there are people who get upset whenever their fantasies about the law are challenged. There’s a good chance that’s where the downvote occurred.

Equally likely— on a phone it’s very easy for those of us without big thumbs to tap the wrong icon, LI does not let you correct your vote.

Perhaps some of the down votes are from people who don’t know that in New York State the “Supreme Court” is actually the lower level trial court, underneath higher level New York State appellate courts. Therefore, despite the I’ll chosen name, and as is the case in other states, opinions of this confusingly named trial court lack precedential value.

I suspect neils is correct. I had no idea the NY Supreme court wasn’t a “supreme” court until this ruling came down.

Come people, give Milhouse a break.

The City of New York and the other defendants have already filed their appeal. They also have more money, access to large law firms (at tax payer expense), and time—more than the plaintiffs do.

The appeal will be dragged out and take a long time. Think Gibson Bakery.

Did the judge grant an injunction pausing the ruling pending appeal? I had not heard so.

Now do the military.

The military one might actually stand because unlike the idiots in New York, they haven’t been granting arbitrary exemptions to groups of people for no actual reason.

They’re still in some trouble because they’ve been blatantly and illegally refusing to even consider religious exemptions before blanket denying them, but that won’t help the ones that have already been separated who didn’t ask for a religious exemption.

There is also precedent about vaccinations in the military. It’s a readiness issue – if you’re sick you’re not ready to deploy and do your job. Calling in sick to drive a trash truck isn’t quite so urgent.

They already had this fight over the anthrax vaccine way back when.

Ah, then your argument about readiness means any female who gets pregnant should be immediately discharged since they are non-deployable.

I wasn’t arguing anything. I was presenting the arguments as already made by others.
And, yes, there used to be exactly such a policy about pregnant women. It was loosened in order to get women into more combat-related roles. The newer, looser policy, has been abused – for example, pregnancies suddenly spike when an aircraft carrier is about to deploy, necessitating other people be called up to fill those positions. (Also, even that looser policy requires that a woman found to be pregnant while on deployment be immediately sent home.)

One important difference between pregnancy and vaccinations, though. Pregnancy is temporary with a known end date. Vaccination status is an ongoing issue, as it relates to the risk of non-deployability at any moment. The pregnant woman can be (and is) taken off deployment status for the period of the pregnancy (and some time after). Any military member who might get sick tomorrow is an unknown.

Mind you, the military allowed for some exemptions for vaccines. The few people who refused any of the former array of shots would be taken off deployment status but still allowed to do their duties stateside. However, their career would be a short one if they didn’t deploy. The hard line the military took with the anthrax shot (and, iirc, hepatitis-C?) was a shift in posture. I don’t recall the exact outcome, but the military moderated slightly. Kicking people out directly has never been the go-to for the military as relates to vaccines.

I wish the New York Supreme Court could have fired all the pols behind this and docked their pay to boot. That would have been better than ice cream.

Don’t get too excited yet. This is just one judge on one trial court. There are multiple levels of appeals available, and it will almost certainly be appealed immediately. If it isn’t, that will mean the city has accepted that it has no case.

Exactly as SHOULD have happened a year ago.

Claiming ’emergency’ as a justification simply does not work when you grant arbitrary ‘exemptions’ for no actual justifiable reason.

A good first start but I wish New York would rename their lower courts. I thought this was the State Supreme Court that made the call.

Here’s it’s just a single judge and yeah it will be appealed. The city is not going to want to admit it was wrong without a long fight.

Yep, pretty stupid to name something supreme, when it’s not supreme at all.

“If it was about safety and public health, no one would be exempt.”

That is the core of the opinion. The State of New York, like some other States, the CDC, FDA, Pfizer and Moderna, damaged its own credibility in this matter beyond repair.

By referring to the NY Supreme Court your article is a bit misleading. As indicated in other comments, in New York the “Supreme Court” is a trial court. It is “Supreme” because it is the highest court of general jurisdiction. But there are higher appellate courts above it, the highest being the Court of Appeals. As Prof. Jacobson can confirm.

So, next time, they can just mandate EVERYONE take an experimental, untested, mRNA injection and that will pass muster at the NY State supreme court, yes?

Not really seeing this as a win.

Did they even try to argue the City had no authority to issue the mandate at all? Or, just that it was arbitrarily enforced?

Well, the city charter gives them a LOT of authority.
If the people of NYC want to change that, they will have to do it the old-fashioned way – with votes.

It may be the opinion of one judge- but overturning that opinion is going to require twisting the law and logic into knots.

Not that that has ever slowed them down much before.

This case will work this way though the courts, and in the end, dicta will state the obvious: Eric Adams is a moron.

When it became apparent the vaxxes don’t prevent transmission, the mandates ceased to be about “public health” and the vaxxes themselves officially became nothing more than “therapeutics” (with claims of “preventing severe illness and death”). If government can require individuals to use a therapeutic in the treatment of a disease (something a person’s physician can’t even do), taking control over your personal health choices, what’s to stop it from demanding you eat your spinach and take your vitamins?

The upcoming 2023 spinach and vitamin shortage.