“Definitely not laughing: CNBC, Bloomberg, ABC7-News in the Bay Area, and other media outlets duped by two Merry Pranksters outside the Twitter offices today.” 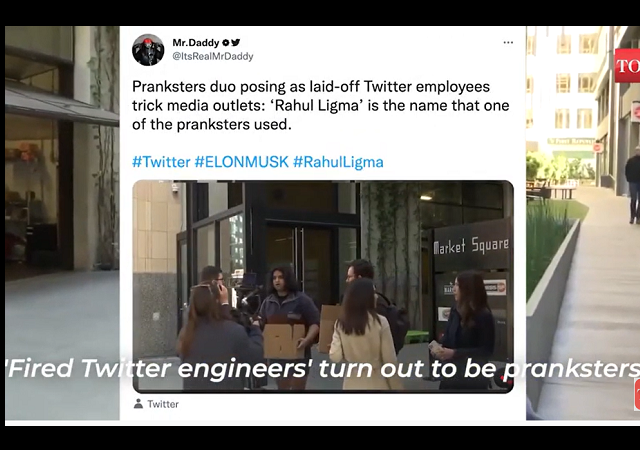 If there’s one thing we know for an absolutely certainty, it’s that the Democrat activist media works full-time to prop up Democrats and to tear down anything and anyone who is perceived to not toe the America Last leftist line.

The latest example of the divisive role legacy media plays in American culture and politics has left multiple outlets with egg on their face for gleefully leaping on a “story” that they hoped would harm Elon Musk, whose purchase of Twitter has caused the most amazing (and hilarious) meltdown on the left (archive link).

They are visibly shaken. Daniel tells us he owns a Tesla and doesn’t know how he’s going to make payments.

The Verge broke the real story:

In videos circulating on Twitter Friday morning, two men carrying boxes are seen standing near the entrance to Twitter’s San Francisco building, claiming to have been laid off by Elon Musk, who officially took over the company Thursday evening.

There are plenty of problems with what these two men say to reporters. The most glaring is that one man identifies himself as a software engineer named “Rahul Ligma.” The Verge has confirmed that name does not exist in Twitter’s Slack or email system. There is also no evidence that the employee exists on LinkedIn.

“Ligma” is, of course, also an internet hoax designed to elicit the response “lick my balls” from people who are in on the joke. That didn’t stop multiple outlets, including CNBC and Bloomberg, from running headlines Friday saying that laid-off Twitter employees were leaving the building carrying boxes.

Somewhere out there, Heywood Jablome and Pat McGroyne are laughing. Definitely not laughing: CNBC, Bloomberg, ABC7-News in the Bay Area, and other media outlets duped by two Merry Pranksters outside the Twitter offices today.

One gave his name as Rahul Ligma. Fans of internet memes would have recognized the monicker, which is a set-up for a vulgar joke that circulated on Twitter. The other was Daniel Johnson, at least during the interview.

Media outlets hungry for a sob story leaped on it, with the usually reliable Bloomberg running headlines of employees leaving Twitter with boxes in hand.

Local TV news reporter Suzanne Phan of ABC-7 tweeted video of the scene, capturing poor Ligma’s tale of being fired during a Zoom meeting. Embolded by the media interest, Ligma held up a copy of Michelle Obama’s book, declaring that the former First Lady “wouldn’t have happened if Elon Musk owned Twitter.”

Also of concern to the ex-employee pranksters: Britney Spears and the future of democracy, both endangered by Musk’s ownership of Twitter. Topping off their complaints was a confession — since they didn’t have jobs, they were worried that they couldn’t make the payments on their Tesla cars.

As pranks go, this is one for the ages, and even Musk himself got in on the mockery of “journalists” who seem incapable of performing even a LinkIn search before running with a “story” that supports their narrative.

Ligma Johnson had it coming 🍆 💦 pic.twitter.com/CgjrOV5eM2

So… Ligma & Johnson have been sacked? pic.twitter.com/EmPYfzRldz

This is too funny

They said their names were Rahul Ligma and Daniel Johnson 😁

This is too funny. Two guys posing as laid off Twitter employees. They said their names were Rahul Ligma and Daniel Johnson. Not one reporter thought that was odd. They just ran with the story. Humor is back en vogue on Twitter y’all. https://t.co/ptPmhJBuOA

These two were epic. One of the funniest things I have seen in awhile. These guys proved the media to be a bunch of hacks, and who do no research before publishing a story. They will go down in history as Ligma, and Johnson. Ligma Johnson. https://t.co/E54pGTQAjL

The one that takes the cake is Occupy Democrats; they were still peddling the hoax as if it were real hours after the truth went viral. Did they really not know that it was fake? Hard to believe, especially since they literally quote Musk’s tweet.

BREAKING NEWS: Democrats have fallen for the Ligma Johnson Joke, further proving libs have 0 awareness and sense of humor. https://t.co/gIUp4tnS4R

While humor and mockery are always excellent tools against the humorless, tyrannical left, we need to see a great deal more pushback on the #FakeNews outlets and their rampant spread of propaganda and lies.

So far, only a handful of Republicans—including Florida governor Ron DeSantis and Arizona gubernatorial candidate Kari Lake—have followed President Trump’s wildly popular lead and called them out on their rampant bias and journalistic malpractice.

Is the same news media that reported on the Asiana plane crash in San Francisco who gave the names of the flight crew as: “Sum Ting Wong,” “Wi Tu Lo,” “Ho Lee Fuk,” and “Bang Ding Ow.”?

I think their editor’s name was Heywood Jablowme.

OMG, this is hilarious!

Beat me to it.
Once I saw that newscast, I realized that with just a little work, anyone could make the meatpuppets say almost anything.

As long as it fits the narrative out of Share Blue.

They are so d_mn arrogant, they probably don’t care.

I think this case represents a PERFECT strategy for dealing with the biased MSM — feed them FALSE stories that support their point of view. They won’t bother to verify the purported facts.

As they say down South, that’ll lern ‘em.

The other obvious instance is the “right wing white supremacists” who showed up to a Glen Youngkin rally with tiki torches, and turned out to be sent by Lincoln Project false-flaggers.
“Journalists” were entirely oblivious that one of the “white supremacists” was black!
Reminds me of this old joke.

Reuters is on the hoaxed list too. The story is stillscrolling on yahoo.com still with Reuters the source.

I was not up to speed on the “Ligma” thing, so I thank you, Fuzzy, for that little tidbit of enlightenment.

Mr. Sugma is jealous of all the press reports on Mr. Ligma.

Hilarious! I’ll gladly look for opportunities to do the same.
Has anyone noticed the absence of “man in the street” interviews?

Mark Dice still does them. But the humor is VERY depressing when you realize these are real people that society considers functioning adults.

This is hugely funny and effective. Accomplishes far more than posting angry comments against the media on the Internet.

They just keep stepping on the rake. Architects of a dour, grey, tense and depressing future that lacks a comedy release valve. Mockery is most effective when the targets just don’t get the joke.

I heard that Craven Moorehead was also let go.

Reminds me of the DeNiro skit on terrorists.

Receptionist: There is a man at the front desk who wants to see Michael Hunt.

While we are here in the gutter for a few minutes, several years ago the TV show “Silicon Valley” managed a 3 minute long “dick joke.” Not to be outdone, “Letterkenny,” a Canadian sitcom produced an episode long effort utilizing the local Mennonite family headed by Noah Dyck and his wife, the former Anita Snatch. Even better was Anita being played by the actress who played the psychiatrist in the hit show “Prison Break.”