AP News: “Workers at refineries crucial for Iran’s oil and natural gas production protested Monday over the death of a 22-year-old woman.” 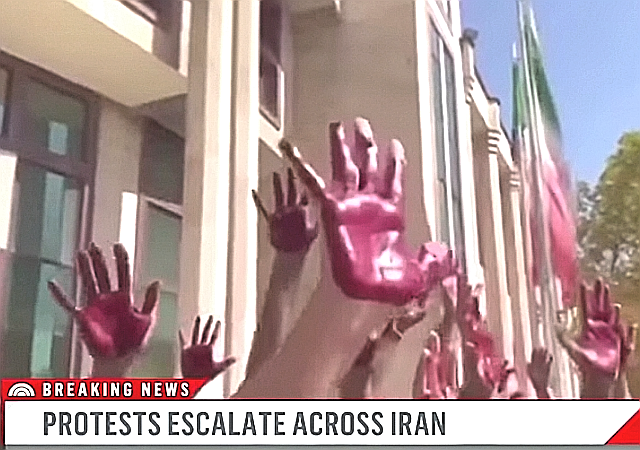 Anti-regime protests in Iran have intensified as they reach the country’s critical energy sector.  “Workers at refineries crucial for Iran’s oil and natural gas production protested Monday over the death of a 22-year-old woman,” the Associated Press reported.

Protests against Iran’s Shia-Islamic regime began four weeks ago after an Iranian woman was found dead in police custody. The 22-year-old, Mahsa Amini, had been arrested by Iran’s Islamic morality police for violating the Sharia-mandated dress code.

Today in Iran, workers strike at Bushehr Petrochemical, chanting “Do not fear, do not fear, we are all together.” Striking oil workers played a critical role in the 1979 revolution. pic.twitter.com/gwLmD5jt5q

The protests, which were first carried out largely by students and women in cities across Iran, appear to have gained the support of Iranian workers. “Iranian protesters remained defiant Monday with students staging sit-ins and some industrial workers going on strike despite a crackdown activists say has left dozens dead and hundreds more imprisoned,” the public broadcaster France24 reported.

Workers at refineries crucial for Iran’s oil and natural gas production protested Monday over the death of a 22-year-old woman, online videos appeared to show, escalating the crisis faced by Tehran.

The demonstrations in Abadan and Asaluyeh mark the first time the unrest surrounding the death of Mahsa Amini threatened the industry crucial to the coffers of Iran’s long-sanctioned theocratic government. (…)

From the capital, Tehran, and elsewhere, online videos have emerged despite authorities disrupting the internet. Videos on Monday showed university and high school students demonstrating and chanting, with some women and girls marching through the streets without headscarves as the protests continue into a fourth week. The demonstrations represent one of the biggest challenges to Iran’s theocracy since the 2009 Green Movement protests. (…)

Online videos analyzed by The Associated Press showed dozens of workers gathered at the refineries in Asaluyeh, some 925 kilometers (575 miles) south of Tehran, on the Persian Gulf. The vast complex takes in natural gas from the massive offshore natural gas field that Iran shares with Qatar.

In one video, the gathered workers — some with their faces covered — chant “shameless” and “death to the dictator.” The chants have been features across protests dealing with Amini’s death.

“This is the bloody year Seyyed Ali will be overthrown,” the protesters chanted, refusing to use the title ayatollah to refer to Iran’s Supreme Leader Ali Khamenei. An ayatollah is a high-ranking Shiite cleric.

Watch the awe-inspiring bravery of people of Sanandaj. Their city has been subjected to shelling by the regime since yesterday, but they went outside to dance, men and women.

Despite the threat of deadly force, thousands of Iranians have taken to the streets chanting “Death to the Dictator” and “We Don’t Want Islamic Republic,” a bold reference to 40 years of Shia-Islamic rule and the country’s ruling Ayatollah Ali Khamenei — the unelected “Supreme Leader” of the country.

“A video posted later Tuesday purportedly showed a massive bullet hole inside the home of one Sanandaj resident, a hole that Hengaw alleged came from a heavy .50-caliber machine gun — the type often mounted to armored vehicles,” the broadcaster noted.

I think they are all busy worrying about their constituents in Gaza.

Has any country/region/people ever been able to successfully rid itself of Islam once Islam sinks in its teeth?

1492 Spain offers a possible example as does 1924 Turkey. But really how successful since the Islam virus remained and is in both places reasserting itself.

A little reminder to everyone

100% of the protestors heroically risking their lives against the Iranian Regime are Muslims who are against the misuse and abuse of their religion.

This kind of heroism is Islam at its best.

After so long being ruled by radicals, a large percentage of Iranians are probably not salvagable.

The example of the failure of the USSR would indicate that the citizenry can become disillusioned and remove excessively repressive regimes even after many decades.

Biden should send in a Marine Division to help restore order.

Considering how much Iranian leadership covets nukes, we might be better off giving an opportunity to study a few going critical.

Actually, given that it’s Biden, I would not rule it out.

You can only kill so many innocent people before it becomes a problem and people take notice.

“You can only kill so many innocent people before it becomes a problem and people take notice.”

If people notice you killing too many people they think are innocent, it becomes a problem. That’s why accurate crime counts and reporting have to be stepped on.