‘In Europe, The Bird Will Fly By Our Rules,’ EU Commissioner Warns Elon Musk

‘In Europe, The Bird Will Fly By Our Rules,’ EU Commissioner Warns Elon Musk

“The EU official overseeing internet regulation cautioned the new Twitter boss that the social media giant must play by the bloc’s rules in Europe.” 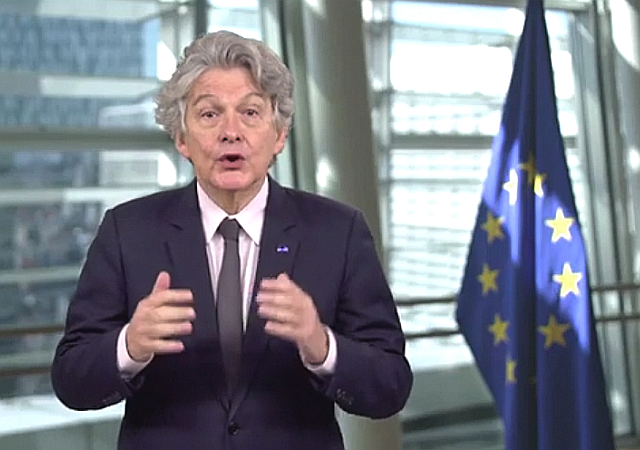 Hours after Elon Musk completed the $44bn acquisition of Twitter, a top European Union official has told the billionaire to run his social media platform in compliance with Brussel’s rules.

“In Europe, the bird will fly by our rules,” Thierry Breton, EU Commissioner for Internal Market, tweeted responding to a post by Musk on Friday that declared that the “bird is freed,” a reference to his takeover of the social media giant.

In Europe, the bird will fly by our 🇪🇺 rules.#DSA https://t.co/95W3qzYsal

The European Commission has reminded Elon Musk that he must follow EU rules following the confirmation that he has taken control of Twitter.

“In Europe, the bird will fly by our rules,” Thierry Breton, the EU Commissioner for the Internal Market, said on the social media platform on Friday morning.

A few hours earlier, Musk tweeted to say “the bird has been freed,” a reference to Twitter’s logo. (…)

The EU commissioner posted a link to a video published in May showing him with the Tesla CEO in his car factory in Austin, Texas. Musk said EU digital regulation was “exactly aligned” with his own thinking and he agreed “with everything” Breton had said on the measure which deals with platforms’ obligations to moderate content.

EU commissar Breton’s tweet was accompanied by the hashtag DSA, a reference to the bloc’s Digital Services Act, a recently passed law that could penalize Twitter and other digital platforms with billions of dollar in fines for failing to comply with Brussels’ regulations.

“The DSA, which was passed by the European Parliament in July, will demand accountability and transparency from Twitter about decisions the company takes and paves the way for Europe to issue fines of billion of dollars if the company fails to comply,” the tech news website CNET reported Friday.

Breton also tweeted a clip of Musk agreeing with EU’s planned DSA regulations when they both met five months ago in Austin, Texas.

The European mainstream media and EU elites are worried that Musk’s takeover could end the rigorous censoring of conservative and right-wing voices on Twitter, and even restore President Trump’s account, a nightmare scenario for many European Liberals.

“Many Twitter users have expressed concern over Musk’s pledge to protect ‘freedom of speech’ on the platform including mulling the option of reinstating former President Donald Trump who was kicked off Twitter for his connections with the January 6 riots at the Capitol in Washington,” Germany’s Deutsche Welle complained.

The bird might not fly in Europe if they are freezing in the dark.

Is the EU still a thing?

It’s withering, from the inside and outside.

International Pedophelia has a home in the EU. They’re as entrenched and animated for furtherance of normalization of pedophelia as the NRA is for the 2A.

I l ike the guns of the NRA better.

In Europe, the bird will fly by our rules

I’d like to take this opportunity to thank the EU, again, for all those asinine, annoying “privacy/cookie alerts” that appear on just about every web page that have to be x’ed out. The EU should have to pay me for the time and effort I have to expend doing that.

Maybe we’ll get lucky and Ukraine will try to stage a false flag attack on Brussels? That would be a win-win-win.

The Brave browser has a new option to block the “privacy/cookie alerts”. Yay!

“In Europe, the bird will fly by our rules,”

Someone needs a history lesson regarding overcoming censorship and propaganda in Europe.

Just as the west used the radio waves to overcome Soviet censorship from 1949 on (Radio Free Europe), Twitter can be provided to Europe via the massive network of Starlink communications satellites their owner happens to control. They don’t need your permission to overfly Europe and certainly don’t have to submit to your censorship.

Also, you might want to re-check your own popularity with your citizens before you threaten to block Twitter, and by extension, Starlink.

“Muh private company. Don’t like it? Don’t use it. Make your own.”
I bet France is just itching to revive Minitel.

Every elitist prick needs to be kicked in the crotch.
Then taken on a boat in the Antarctic and heaved overboard.
Then fished out immediately and wrapped in a warm blanket and given a cup of hot soup and make them feel grateful.
Then throw them overboard again and everyone on the boat laughs and sails away.

I wonder if this was one of the Eurowankers that smirked at President Trump when he warned them about their dependence on Russian gas and oil.

You can bet that President Trump’s reinstatement on Twitter will include many reminders….

One of the top priorities a GOP president elected in 2024 should be to strip unelected elitist leftwing authoritarian bureaucrats, foreign and domestic, of their power over American citizens. As much as possible. As quickly as possible.

These EU rules were passed in July, just as it was becoming likely that Musk would succeed in buying Twitter. EU rules = WEF rules.

The Deep State has already warned Musk about Twitter being a national security threat. Congress wants to destroy SpaceX and Tesla. The Pentagon has apparently “captured” Starlink so Musk has his hands full.

Myself, I wish Musk would shut down Tesla operations in China before the CCP seizes them.

We’ll see how that works out.

Why are so many governments afraid of free speech? (that is a rhetorical question)

I have no trouble believing that Musk is more intelligent than all of them combined.

I am sure he has contingency plans.

I think Musk as thought all about that, and made his decision: SpaceX is untouchable, Tesla USA is entrenched, and what difference is to him if he’s personally worth 300 billion or 1 billion?

There are two fathers of the Post-Pedphile America: they are Donald Trump and Elon Musk, no less courageous and great than George Washington.

What a pompous ass, taking Musk out of context, especially as Musk agreed with EU’s planned DSA regulations five months ago .

Well, since they failed to control gas and oil, they will satisfy themselves to exert control over something more their size—a bird.

Then by all means, present them with “the bird.”

EU thinks they can regulate private communications and diary entries too

Pretty sure http://www.Gab.com doesn’t follow any of Europe’s rules.

Andrew Torba’s position has been, “We’re an American company.”

Perhaps we can “unforgive” some of that war debt….

” Sure thing, thierry. All I need from you is a check for $48billion or so and you can run the damn thing any way you like. ”

So this sniveling lefty has got his 15 minutes of fame. And hopefully the bird with crap on his head.

Musk should center everything in Italy. And maybe Poland as well.

I’d add the Czech Republic, Slovakia and Hungary, to your list.

Can someone explain what useful purpose Thierry Breton provides for the world?

The EU isn’t going to like the solution. Set up separate servers for accounts based in the EU. Those servers and the accounts maintained on them can be DSA compliant.

The next step, which Musk has already hinted at, is a user based content filter. It would be easy to then allow users to opt to stay in EU based servers and the ‘protection’ of the DSA or opt to move to a non DSA server.

In essence the EU is going to be stymied due to consumer choices. They will likely argue for extraterritorial powers over these accounts despite the choices of consumers. Then the EU is in the position of explaining to their Citizens why they need the EU to ‘protect’ them from online speech. Arguments which will be rooted in the same reasoning offers up by other authoritarian regimes.

Perhaps the most significant vote of my life was for Brexit.

The UK was ruled over by a hostile foreign. Helped by the arrogance of the EU and hubris by many UK politicians who were on the EU payroll, we escaped just in time. We escaped this sort of EU power and attitude.

One again Europe is under the dark clouds of approaching dictatorship. This time the US and the UK must leave them to suffer their self-inflicted hardships. Maybe the citizens of Europe will resist the new tyranny, maybe not. Without a 2A they will probably end up as slaves.

My great grandfather and my grandfather fought to liberate Europe. My father was a peacekeeper on the Rhine. But for me – screw them. I proudly served to protect my own country.

I’m so old, I remember when people were clamoring to get into the EU, because it would let them do more stuff, better.

The EU might have gotten it’s army, if the people in it hadn’t suspected it would be used internally against them, vs. externally vs, let’s say, an invader from the East.

No different than our military after Obama and Biden.

The EU does seem disappointed in the impulses of their citizens lately.

High time for them to dissolve the people, and appoint another, one would think.

Elon: You can’t even keep the light and heat on. Now, go away I’m busy sending rockets to Mars

One starlink receiver inside the EU puts the Bird inside their firewall; then a US VPN address and their censorship is moot. I would venture that it’s already happened.

The right isn’t such a problem in my mind. 🇪🇺
I think more of a problem are the West EU policies on Islam ☪️ , Trans 🏳️‍⚧️ gaga and of course the open borders 🛳 situation which does not exist officially but does in reality.
The latter issues feed the right. So instead of dealing with mass Muslim migration and the resulting antisemitism, homophobia, misogyny and mass slaughter they simply declare any criticism of these a “crime”. If you tweet that you don’t appreciate having your head cut off while out shopping you will be censored as a racist.
If you ask why your gay friends have water bottles thrown at them in Neukölln when walking down Main Street you are obviously a racist. If you ask why your Jewish friends at are spat at and punched in the face you’re obviously a racist.
It will be difficult in parsing that line in the EU and moderation will be more difficult if the moderators must be more careful and work with a finer “knife” instead of just banning discussions entirely like they do in China 🇨🇳 .
The EU is also worried that after the Meloni win in 🇮🇹 Italy that the overall situation may tilt against them. The truth is of course that we in Europe have no free speech and that our speech is tightly controlled. Many a discourse is strangled because the MSM is pro status quo similar to that in the USA 🇺🇸.
I have been trying to post in The Times of London and the censorship in their reply section is crass. Never mind the German 🇩🇪 press and the German public broadcasters.

run his social media platform in compliance with Brussel’s rules
If I were Elon, I would – having freed it – give them the bird. “It’s the internet. man. Your censorship is merely node failure, and it routes around.”